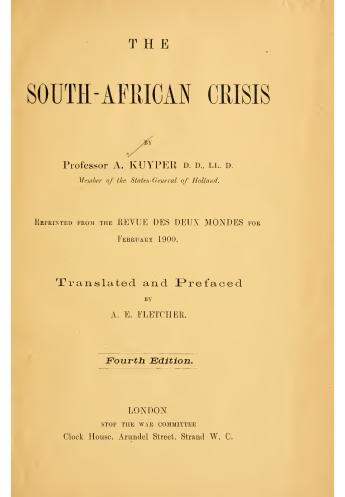 powerless to protect subjects 0; and the whole capitahsts press at itself

Cape thrashed out this ''gross case" against the Boers, and Mr. Chamberlain by means of his Blue Books brought all these recriminations and all these the

journalistic tirades, before the

was thus that public opinion, to his own liking, was created and that the country was prepared for a war of brigandage. Oh! but, it may be said, this was not to interfere in the internal affairs of the It

for the complete protection of British subjects, or rather the good apostles of Johannesburg who having first said

"Allow us to dispense

that the police is

the amphitheatre at Johannesburg compared with the disgraceful scene in Trafalgar Square, in London even ?

The Volksraad was corrupt! and yet war

made on the Transvaal because the Volksraad determined not to do what the capitalists desired. There a formal contradiction here and one of the proposi-

tions excludes the other.

other serious grievance arising out

THE WIFE OF PILATE

Part I Many years ago, there was a gathering in a certain place on a Sunday evening after church service. On that Sunday the Lord had not left Himself without testim...

“Neither is There Salvation in any Other…”

First among equals "Jump the queue not very British"

The workers warn that Parliament is in danger of appearing decidedly undemocratic in allowing the lawmakers, in British parlance, to "jump the queue." "People are outraged", said Kevin Flack, an a...

The Heidelberg Catechism (36) (Explained for Children)

This Lord’s Day speaks about the third commandment, which begins with the words, “Thou shalt not take the name of the Lord thy God in vain.” Question 99: What is required...

Loitering in the street of a small village on a Sunday evening was a group of young men, and I was one of them. It did not matter to any of us that it was the Lord’s day, for we thought it was our...