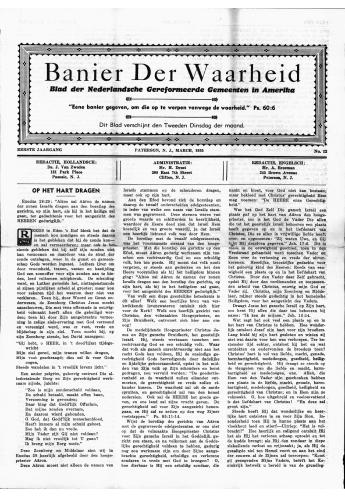 Father—Children, I read a story sometime ago that the first father of man was an ape. And, as each ape grew up, it very gradually altered in shape, and size, and ways. Then after a time a creature appeared which was half man, half monkey, and on and on, till at last a rough kind of man was on the earth, who kept improving until there was an ordinary race of men.

This very silly story is called Evolution. It may sound funny, but it is very wicked to make up tales that contradict the Bible. God Himself tells us quite clearly in Genesis that He made man in His own image—a perfect being, with a perfect body and soul. There was nothing about Adam like a monkey. This is another one of those evil imaginations of sinful man, whereby he denies God as the Creator and Almighty Being. And although they may teach such errors at school, never believe any of those things which contradict scripture. Because by believing them we consent to their lies and become guilty before God.

James—Have we any better books wherefrom we can learn more about the beginning of man? Where did man really come from?

Martha—Yes, James, we heard that in our last table discussion which you may find in the February number of our church paper. God made man in His own image and likeness, Gen. 1:26.

Joan—You always come with your Bible and speak about God. How do you know who God is and where He is? You say God made man but evolutionists claim man derived its being from an ape. I have as much right to believe them and their books as you have in believing your way.

Martha—Well Joan, every one may believe as they please, ’tis true, when we consider every man on an equal basis. But, has not man some one higher than himself to whom he is responsible?

Joan—Well, ah, yes! I cannot deny that. I do believe and feel within me that my life depends on something higher and more powerful!

Martha—Now then, I’ll grant you that evolutionists have their privilege to their own fancies before man, but what is their duty as man before God? They, too, are subject to that same higher power as you are. And as such they may not contradict the Word of that higher power. When they do so, we may not believe them. Therefore, because the Bible, which is the only true book, tells us clearly about mans origin, as coming from that higher power, we must believe that Book before any other. That higher power is God Himself, and He dwells in the highest heavens, supreme over all—manifesting Himself by His Word and Spirit.

James—Where can we find that record?

Father—We read that in Genesis 2:7, “And the Lord God formed man of the dust of the ground, and breathed into his nostrils the breath of life; and man became a living soul.” And about the woman we read in verses 21-23: how, “the Lord God caused a deep sleep to fall upon Adam …. took one of his ribs, and …. made a woman and brought her unto the man. And Adam said, This is now bone of my bones, and flesh of my flesh.” So you see from this record of God to man that there was no monkeys or apes from which Adam sprang forth nor developed. He was formed by God out of the dust of the earth. Just like we as children would make things from mud and water. So God took the dust and made Adam. Then, He breathed, sent forth His breath, into that created form of dust, into the nostrils, and so it became a living soul. Thus man has a body and soul, two parts.

James—How is it that we are said to be dust?

Martha—You see, James, Adam was the very first person ever living. And as God created, or produced, him from the dust of the earth, and likewise produced Eve from Adam’s rib, she, too, so well as all the human race have their origin from God out of the dust relative to our bodies. Therefore, ‘dust thou art and unto dust shalt thou return,” teaches scripture.

Joan—But, how can we return to the dust when we consist of two parts? You just said that God breathed into Adam’s nostrils and thus he became a living soul.

Martha—Yes, as to the body, it returns to dust; but as to the soul, that returns unto God from whence it came.

Joan—Well, why does the body have to return to dust and the soul to God?

Father—That again proves to us, Joan, that we are subject to God as our Creator. How then dare you to reject God’s Word and accept in place thereof foolish man’s imaginations? Most certainly God proves Himself worthy of our subjection as He still continues to retain all might, power, and dominion over man as the creature or, product of His own hands. If man derived his origin from apes or monkeys then he ought to pay respect and subjection unto the ape or monkey. But alas! man in his foolishness ascribes to us faculties exceeding those of the monkey and ape. For they are wild and lack faculties of reasoning power, they have to be chained and trained by man from whom man was supposed to have been produced or developed. Is not God worthy to be honored by man whereas He continues to this day to give breath and life and also takes them away; but yet He remains the same Unchangeable, Almighty Supreme Being? Should we then believe any mans fancies more than God? Indeed not! Never do dear children! Cleave fast to the Word of God. It is a sure lamp unto your feet and a light upon your path. And it also teaches us why we now must return unto the dust from whence we came. The Lord willing we hope to consider that in our next number.

The Banner of Truth | 6 Pagina's

The Banner of Truth | 6 Pagina's

In our last number we noticed the origin of man to be of God and not derived from monkeys; and how man was created by God out of the dust of the ground and quickened to life by the breath of God. S...

The witness sent by God into this world, did bear witness of the Shining Light, which lighteth every man that cometh into the world. That Light was in the world, and made the world, yet the world k...

BY GRACE ARE YE SAVED THROUGH FAITH; and that not of yourselves: it is the gift of God

Ephesians 2:8Oh, What is man, frail creatures of the dust Of no consequence, unless in God We trust.We are by nature dead in tresspasses and sin,And abound in iniquity that r...

Father—Children, there are many stories about in the world but most of them are untrue and therefore very dangerous, wicked, and misleading. One of these stories is that the world made itself—tumbl...