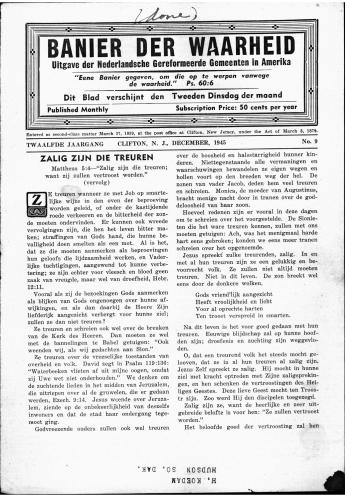 JESUS AND HIS SEED

They are identified; and it is not possible to separate them. Now just investigate this point a little. When, where, how, were you “turned from darkness to light, and from the power of Satan unto God?” Hast thou any remembrance, hast thou any knowledge of the fact? Is it really proved to demonstration, that thou art not of the seed of the serpent, that thou hast an ardent attachment to Jesus? These are the persons to whom the salvation belongs; and these are the persons who may really get up to their tower.

This seed of Christ can never be extinct, never be lost. Changes most appalling have succeeded one another, in ages gone by: the apostolic dispensation gave place to pastoral operations, and pastoral operations were blessed of God, many souls being “born of God.” They were chased, hunted, murdered by millions under Pagan persecution. Pagan persecution not being able to carry into effect its wishes, gave place tamely to those more ferocious bloodshounds, the Papists. When Constantine assumed the sovereignty — the most awful thing which ever took place in the church of God since Christ came upon earth— then came in Popery to try to get rid of the seed of Christ, and to destroy that which Pagan persecution had left. But Christ had has seed still; and he has his seed now. And because Popish persecution could not succeed, free will — though not openly so vile — would fain poison all the seed of Christ. But amidst all that Papists, Pagans, and Pharisees can do, Christ’s seed shall never be extinct. They shall have their lineal descent; instead of the fathers shall come up the children, and instead of the children shall come up theirs, and the children’s children shall testify to the greatness, the preciousness, and the glory of God’s salvation in Christ. They can never be lost. They may be hunted out of the world, to all human appearance, and, no doubt, many will be again by martyrdom — but not one shall be lost. Those priestly curses of the earth, who have seen martyrs to the stake, have, generally, not been contented with venting their infernal rage against the poor body, but have pronounced curses on the souls of their victims. But the curse never came; the punishment was inflicted on the body, but Christ took care of his own; he carried the soul from the stake at the ‘ moment of its departure. All the Popish priests in the world could not fix one curse upon an elect vessel of mercy. Secure in Christ he can never, never be lost, never cursed, never banished from his presence: for thus it is written: “My sheep hear my voice, and I know them, and they follow me: and I give unto them eternal life; and they shall never perish, neither shall any man pluck them out of my hand.”

May the Holy Ghost put power into the few remarks which have thus been made, and to the name of Israel’s triune God be all the glory.

— continued —The Westminster Catechism says of this church, “The church invisible consists of the whole number of the elect that have been, are, or shall be gathered into one under Christ, t...

Rev. C. Vogelaar, Clifton, NJ There are great privileges but also duties for God’s children. Let there be reverence towards God. They should...

The salvation of sinners is a gift from God. The Lord works this salvation through the means of grace. We are bound to use them. However, God's good pleasure is the only fountain and cause of salva...

The Lord preserves His children. They may stray far away so that His Name is dishonored, but God will revive His own work. He renews them to repentance and to a sincere and godly sorrow for their s...

Uitgave: JESUS AND HIS SEED