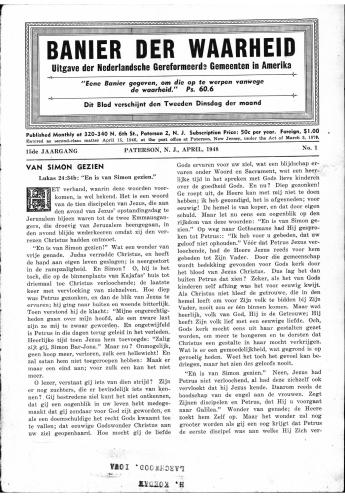 THE CHURCH OF GOD

As it is confessedly necessary, in all human sciences, to settle the precise sense of the terms used in them, in order to obtain an accurate knowledge of their several subjects; so is this rule more especially proper, though perhaps less attended to, in divinity, and in the word or revelation of God, which is the only sure foundation of divinity, and which, particularly in one of its languages, has a peculiarity of allusion, and precision of expression, not to be met with in any other book or language in the world. The knowledge of the original terms, and due consideration of their usage, would not only afford a just key to the stores of divine erudition sufficiently ample even in this present life, to reward the study and pursuit of the truth-seeking mind; but would also defend it from a thousand errors and false principles, by a direct manifestation of their fallacy, and an almost immediate detection of their pernicious tendency, to the understanding and the heart at once. Without it, people not only lose a very high satisfaction and delight, but must unavoidably take a great deal upon trust, and are therefore neither so good judges of what they profess to believe, nor so capable of defending it, in many respects, from attacks, formed either by the ignorance or the enmity of adversaries. And it may be believed in candor, that if some persons, hostile to divine revelation, could really have read their Bibles, without the help of others; they would have found many, if not all their objections obviated, and truth itself exhibited in her most perfect form; commanding at least their respect, if not, for their own happiness, a more entire attention. At any rate, it is neither just nor liberal to censure a book, which a man is unable to read. A clown, all English, would be esteemed a very incompetent scholiast upon VIRGIL or HOMER.

And yet it must be owned, that though a man hath attained the language of the Bible, and hath acquired a key to much treasure; he may still want the masterkey, which only can unlock the interior or depository of the most precious stores; or, in other words, in order to attain for himself the most interesting matters in the sacred volume, it is necessary for him to have a better tuition than his own, or that of any creatures; lest otherwise, he fall into the case of those, who are ever learning, and never able to come to the knowledge of the truth. He will, however, be probably preserved from many gross heterodoxies, from many anti-christian absurdities, and from the effects of many perverse disputings of men of corrupt minds and destitute of the truth, by the verbal knowledge and literal study of the book and its subjects; as might be instanced at this time in several valuable persons, who seem to have obtained what they hold of truth, and to have been preserved from the reigning errors, in no other way. It is a great satisfaction to see people go thus far: it would be a matter of exceeding joy to find them clearly in the strait and narrow road, without doubt or wavering, owning and enjoying the full grace and glory of the gospel of Christ.

The terms of Scripture, the very names of persons and things in God’s own language, contain in them the doctrines and principles of the most momentous truths; not with metaphysical subtleties, not for logical deductions, as in common books, mot for acute or wordy reasonings; but by authoritative communication and express declaration from God himself, commanding assent with resentment in case of unbelief, who spake by his Spirit at sundry times and in divers manners to the fathers by the prophets. The words used, therefore, do not stand for abstract speculations or lead to finespun theories, to be excogitated by us; but imply living, interesting, eternal realities. They were not intended to convey notions, for the corrupt investigation of man’s doubtful and, doubting reason, or (what the Scripture calls) his darkened understanding; but for the explicit conveyance of positive truths—of truths so important, as to contain in them the interests of the human being to all eternity—of truths so needful, that the human being cannot be happy without them either here or hereafter. For the enjoyment of these he is to yield the obedience of faith, or to give absolute credit to the veracity of his Maker; whose (avlos eqn) or direct instruction, it is neither poor-spirited nor absurd implicity to receive; but, on the contrary, arrogant and presumptous to reject, only because, from the weakness of human intellection, it is not in all cases possible, and especially without some previous growth in grace, to comprehend or explain it.

As a man is reputed a scholar, in proportion as he knows words and things, and words chiefly as leading to the knowledge of things; so a professor of religion is to be reckoned a true divine, or indeed a real Christian, only as he understands the terms and language of divine truth, and the things revealed or signified by those terms; all of which are explicit and clear, as coming from God himself, and sweet and powerful by whomsoever they are truly received, both in doctrine and experience.

Upon the subject-matter of this treatise, which considers many of the NAMES OR TITLES given in the Scriptures to those whom God has declared to be the objects of his favor, it seems proper to say, that it is the author’s general intention to show from these names, that they not only relate to the persons of those objects of divine favor, but also (agreeably to what has now been promised) to certain doctrines or principles, which explain the means, the order, the privileges, which the divine Wisdom hath used in their behalf, or conferred upon them, and which, for the information and comfort of their minds, God devised and ordained the titles and terms to express and declare. The name which God gives must be right; and the sense, or doctrine of the name, must as necessarily be true. To take away the meaning of the name, would be to destroy God’s purpose in giving it: and to allow the meaning (it may be seen, as we go along) will be to allow all the leading or essential principles, which concern man’s present peace and eternal salvation.

Having suggested these few reflections, which may serve as an introduction to the purpose of the following papers; we will now consider one of the most conspicuous and comprehensive titles which God hath bestowed upon his redeemed, in the word CHURCH.

Studying the Word of God

To understand rightly any book of the Bible, we must focus on its unique place in the canon, as well as on its exegesis. The canonical structure of the Bible is proof of its authenticity. It is not...

The Difference Between Converting Light and Common Illumination

Men are wont to distinguish between rational conviction and spiritual. This distinction needs to be carefully understood, for man's rational faculty is the subject both of common and spiritual conv...

A single error infers us to eternal condemnation! What then must be the state of him who has infinite errors standing against him The subject teaches us something of the riches of the di...

(Continued from last issue)BESIDES the reason of the Redeemer’s name, abundant proof of his Deity might also be drawn from all that he did and and said, and from all that has been deof him,...

1. Be diligent in reading the Holy Scriptures.This is the fountain whence all knowledge in divinity must be derived. Therefore let not this treasure lie by you neglec...

Uitgave: THE CHURCH OF GOD