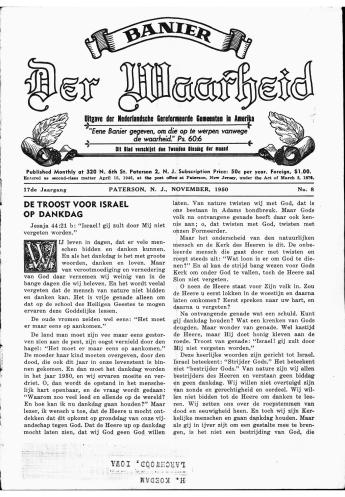 AT the close of my last week’s letter I mentioned briefly the objections which the Anabaptists, Baptists and others raise against Paedobaptism. Let me now attempt to show in a few words why these objections have no foundation.

You will no doubt remember that their first objection is that there is no such text anywhere in the Bible which reads: “Baptize children.” We agree that if one were to search through the entire New Testament he would find no such text. It is comprehended, however, in the command of Christ in Matth. 28:19 under “all nations,” which, as it includes women, so it also includes children. It is equally true that there is no express command for women to partake of the Lord’s Supper.

We must remember that the Scriptures are given to rational men. One of my former instructors used to say: “The Bible is not a kind of legal document from which this or that article can be cited to determine one method of procedure or another, with the conclusion that if something is not expressly commanded it must be omitted.” The Bible is no such 1 gal document and it is a glaring proof of superficiality to insist that every truth must be found distinctly expressed in a specified text. There is a golden thread running through God’s Word which we must learn to recognize and hold fast, and for that reason we must search that Word in order to understand its meaning.

According to Col. 2:11-12 baptism is come in the place of circumcision. Both are signs and seals of the same invisible grace. According to Gal. 5:2 circumcision is abolished. Everyone knows that it is no longer observed and since the time it ceased, baptism, which had become familiar to the Jews and their posterity, has come into use also amongst Christians. Christ himself introduced and instituted baptism and nowhere did he forbid the baptism of children. Since children were circumcised in ancient times, it is only logical and proper that they should be baptized now.

Neither is the fact that children do not understand baptism an objection which can be substantiated. Did the children of eight days old under the Old Testament understand the meaning of circumcision? That was also impossible; nevertheless, it was God’s command that they should be circumcised. Justus Vermeer says in his well-known exposition of the Catechism: ‘‘There was no exercise of the understanding at circumcision, but at the same time the case is entirely different from that of the ‘christening’ of lifeless things, such as clocks, ships, etc. The benefit which children themselves derive from their baptism becomes manifest later, to their own comfort; but their parents and friends may enjoy the benefit and comfort of it at once, besides being excited to acknowledge so great a privilege and to bring up the child for that God unto whom it is dedicated.”

The opponents of infant baptism say also that there is no specific example in the Bible to prove that a child was ever baptized, but that the contrary can be seen in the example of Jesus himself who was thirty years old when he was baptized and, say they, this is the example to be followed. In answer to this third objection: it is an incontrovertible fact that the Apostles baptized entire households. Think only of the households of Lydia, the jailor, Cornelius and others. Could all of them have been adults ? It is easier to believe that there were men and women with children of different ages. You will agree that in the ordinary and normal course of life, when children become of age, they leave father and mother to enter into marriage also. Therefore our argument that little children must have been present carries more weight than that of our opponents.

Finally, the passages found in Matth. 28:19 and in Mark 16:15, 16 are no more of an argument against infant baptism. The Anabaptists say, “Faith precedes baptism. The Ethiopian eunuch was baptized after he had made confession and therefore the baptism of infants is impossible until they can make confession.” Believe and be baptized—in that order—is the rule to be observed according to the reasoning of some.

Must we now lose the argument and acknowledge that infant baptism is contrary to Scripture? Absolutely not! We should never seize upon a Bible text without paying attention to the context in which it appears. The passages found in Matth. 28:19 and Mark 16:15, 16 are missionary commands. From the very nature of the case it is apparent that an entirely different rule applies from that which is in force in God’s Church. Is it not true that there are two forms for the administration of baptism, one for infants and the other for adults ? When a missionary goes to preach the gospel in heathen lands he does not at once begin to baptize but he first begins to teach the fundamentais of the truth, and as soon as the parents acknowledge and accept the truth they are baptized, after which their children are also baptized.

The title of our form for baptism reads: “Form for the Administration of Baptism, to Infants of Believers,” that is to say, those who profess the truth. Little children were brought to Christ, and the Lord Jesus blessed them. This does not mean to say that Christ ever taught the salvation of all infants but it does mean that infants as well as adults are comprehended in the covenant.

This brings us to another line of thought concerning which 1 hope to write the next time. May the Lord establish both young and old in the pure doctrine of the truth. May we receive grace never to deviate from a truth so important as this, although baptism is not essential to salvation. May it be as frontiets before our eyes and may God lay it heavily upon our hearts. “Whosoever believeth not (although we have been baptized) shall be damned.”

Reverend, I have a problem with infant baptism. May I ask you a few questions about this matter Surely. Go ahead. Someone asked me whether I cou...

Rev. W.C. Lamain (1904-1984) I wish to answer a question pertaining to the administration of baptism to the children of the congregation. Whe...

I wish to answer two questions pertaining to the administration of Holy Baptism to the children of the congregation.The first question is—When are our children to be baptized As we all kno...

NOTES OUT OF THE CATECHISM CLASSES Of Rev. J. Fraanje Using the Catechism Book

Of the Sacraments Lesson 36 Part 3 There is another sect among men called the Baptists. These pitiable people contend that only those...

Uitgave: A PORTION FOR ALL