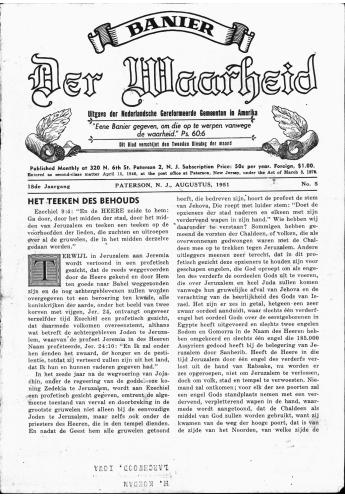 ON HEARING THE VOICE OF GOD

“My sheep hear My voice,” says the Good Shepherd of Israel, “and I know them and they follow me: and I give unto them eternal life; and they shall never perish, neither shall any man pluck them out of My hand.” (John v. 27-28.) All who belong to the flock of His pasture, whether young and tender in years or bearing the marks of frailty and old age, hear His voice speaking to them and join their testimony with that of the women of Samaria, “Come, see a man, which told me all things that ever I did, is not this the Christ.” (John iv. 29.) Matthew sitting at the receipt of custom, with his mind immersed in the things of this world hears the voice of Jesus say “Follow Me.” That voice, clothed with power and authority, entered into Matthew’s heart and conscience and he arose and followed Him.

This hearing of the voice of God is sometimes called the Effectual Call. My young readers will be well acquainted with the excellent definition given in the Shorter Catechism, “Effectual calling is the work of God’s Spirit, whereby, convincing us of our sin and misery, enlightening our minds in the knowledge of Christ, and renewing our wills, He doth persuade and enable us to embrace Jesus Christ, freely offered to us in the gospel.”

How, then, does the Holy Spirit convince us of our sin and misery but by giving us to hear the voice of God speaking to us and condemning our sins to eternal death? How does he enlighten our minds in the knowledge of Christ but by giving us to hear the voice of God saying “This is My beloved Son, in whom I am well pleased; hear ye Him” (Matt. xvii. 5) and revealing to us some of those wonders of grace and love that are to be seen in the person and work of the Messiah? And how does He persuade and enable us to embrace Jesus Christ, but by giving us to hear His voice speaking in the invitation and saying, “Come unto Me, all ye that labour and are heavy laden and I will give you rest.” (Matt. xi. 28.) The importance of this solemn matter cannot be too often or to greatly stressed. As it is in effectual calling that the Holy Spirit unites the soul to Christ, by which union the soul is delivered from the wrath to come and made an heir of everlasting life—so there can be no salvation unless we hear the voice of God speaking to us. (You will read in this issue of the Young People’s Magazine of little Bella Mary Murchison, of Oban, who at the early age of seven heard her Sabbath School teacher quote a text, which made an impression on her. She heard the voice of God speaking to her then, calling her from a state of sin and misery to that liberty with which Christ makes His people free. At the end of her brief life, we find her saying “O, I’m wearying to get away.” She was waiting to hear the voice of her Beloved calling her from time to eternity to be with Christ which is far better.) Where there is no hearing of God’s voice, there is no salvation, no communion with God, no deliverance from sin and wrath. Listen then to the gracious invitation, “Incline your ear and come unto Me: hear and your soul shall live; and I make an everlasting covenant with you, even the sure mercies of David.” (Isaiah lv. 3.)

We read of many in the Word of God who heard his voice speaking to them and whose desire was that of the psalmist “I will hear what God the Lord will speak.” (Ps. lxxxv. 8.) The experience of Samuel must, however, be of particular interest to young people. He was the child of many privileges. Both his parents were religious for we read that they went up yearly to worship the Lord of Hosts at Shiloh. He, himself, was granted in answer to his mother’s prayers as she had hitherto been without child. Indeed, the name he received—Samuel—means “asked of God.” While yet very young, he was brought up to the house of the Lord in Shiloh and ministered unto the Lord before Eli, the priest. Samuel thus abode with Eli in the house of the Lord and each year his mother made him a little coat and brought it to him at the time of the yearly sacrifice. When Samuel was thus so highly favored, we would be ready to think that he, of all children, would have heard the voice of God. Surely as he served in the temple under the instruction of Eli, the priest, he would hear the voice of God speaking to him and thus be saved with an everlasting salvation. But what does the Holy Spirit tells us about Samuel at this time in his life. “Now Samuel did not yet know the Lord, neither was the word of the Lord yet revealed to him.” (I. Sam. iii. 7.) The result was that when the Lord called Samuel, he thought it was the voice of Eli and arose and went to Eli and said, “Here am I: for thou didst call me.” He confused the voice of God with the voice of man. Eli perceived, however, that the Lord had called Samuel and gave him this prayer to use on the next occasion, “Speak, Lord, for thy servant heareth.” Samuel prayed thus on the next occasion and we read “the Lord revealed Himself to Samuel in Shiloh by the word of the Lord.”

Is it not true of you that, like Samuel, you have religious parents? It is to be hoped that family worship is kept in the home of every young reader of this Magazine. Have you not, like Samuel, been brought to the house of God from your youngest years and heard the gospel being proclaimed? Yet, must it be said of you that you do not yet know the Lord nor have yet heard His voice? Is not this a terrible description of your condition? To be ignorant of God is to be lost. “But if your gospel be hid, it is hid to them that are lost.” (II. Cor. iv. 3.) What do you hear when the Bible is read in your home? Is it just the voice of men reading through the words of Truth? What do you hear when your minister is declaring the gospel from the pulpit? Is it just the voice of a man setting forth the doctrines of grace? Perhaps there are times when an impression has been made. Some illustration caught your attention. Some close appeal to your conscience disturbed your usual calm. For a time you were taken up with the desire to be holy and happy. But the impression faded away and you returned to your former ways. Why was this? Because, though you heard the voice of men, you did not hear the voice of God.

It is evident from Samuel’s experience that God speaks to young sinners through His Word. By the power of the Holy Spirit, He is able to make that Word arrest you and turn you from your evil ways, to bring you to Christ and to conduct you to glory. How precious should the Bible then be to us! How suitable also does the prayer which Eli taught Samuel now appear—”Speak, Lord: for thy servant heareth.” May the Holy Spirit give you to breathe this prayer from the heart. Before you read God’s word in secret let this be your prayer—”Speak, Lord.” When the Bible is to be read or family worship seek grace to ask the Lord to let you hear His voice in His word. When you go to Church, then be not content to hear merely the voice of man but let Samuel’s prayer be yours: “Speak, Lord: for Thy servant heareth.” However young you may be, if you are old enough to read these pages, you are not too young to have this experience. The little girl in Oban had it when seven years old and you must hear God speaking to you in His Word or perish in your sins.

Those who hear His voice in this world hear a voice that brings peace and pardon to their souls for “He will speak peace unto His people and to His saints.” His invitation is to come to Him and they, being made a willing people in the day of His power, do come and taste and see that He is good. “For the Lord God is a sun and shield: the Lord will give grace and glory: no good thing will He withhold from them that walk uprightly.” (Ps. lxii. 11.)

Those who die without hearing God’s voice speaking in His Word must hear His voice in eternity. It will be a dreadful voice to them for His voice, as the sound of many waters, will be heard, saying, “Depart from me, ye cursed, into everlasting fire, prepared for the devil and his angels.” (Matt. xxv. 41.) Seek to hear His voice, therefore, while you are still in the land of the living and may the prayer and desire of David be yours—”Say unto my soul, I am thy salvation.” (Ps. xxxv. 3.)

Standing at the Beginning of Something New

Good morning, boys and girls,At this opening chapel, I would like to read for you from 1 Samuel 3:1-10.As I lead you in prayer, I would ask that you sit up straight, fold your hands,...

ASK AND YE SHALL RECEIVE

Many years before Jesus was born there was a man who lived in the land of Israel whose name was Elkanah and his wife’s name was Hannah. They were good people but did not have any children. Now Hann...

OUR GOD SHALL COME

Psalm 50:3a: “Our God shall come, and shall not keep silence.”THE Church confesses God to be her God; on the contrary, the world can not say it. They possess and bow before the god of the wo...

With Heart and Mouth: Is That the Way You Have Made Confession of Faith?

Uitgave: ON HEARING THE VOICE OF GOD