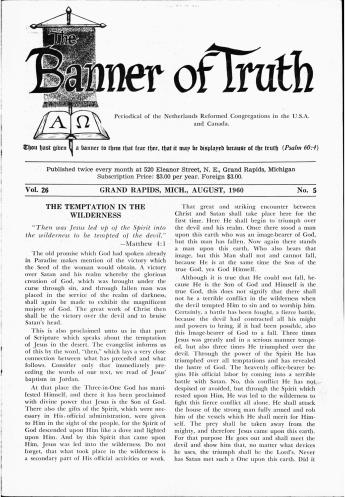 THE TEMPTATION IN THE WILDERNESS

“Then was Jesus led up of the Spirit into the wilderness to be tempted of the devil.”—Matthew 4:1

The old promise which God had spoken already in Paradise makes mention of the victory which the Seed of the woman would obtain. A victory over Satan and his realm whereby the glorious creation of God, which was brought under the curse through sin, and through fallen man was placed in the service of the realm of darkness, shall again be made to exhibit the magnificent majesty of God. The great work of Christ then shall be the victory over the devil and to bruise Satan’s head.

This is also proclaimed unto us in that part of Scripture which speaks about the temptation of Jesus in the desert. The evangelist informs us of this by the word, “then,” which lays a very close connection between what has preceded and what follows. Consider only that immediately preceding the words of our text, we read of Jesus’ baptism in Jordan.

At that place the Three-in-One God has manifested Himself, and there it has been proclaimed with divine power that Jesus is the Son of God. There also the gifts of the Spirit, which were necessary in His official administration, were given to Him in the sight of the people, for the Spirit of God descended upon Him like a dove and lighted upon Him. And by this Spirit that came upon Him, Jesus was led into the wilderness. Do not forget, that what took place in the wilderness is a secondary part of His official activities or work.

That great and striking encounter between Christ and Satan shall take place here for the first time. Here He shall begin to triumph over the devil and his realm. Once there stood a man upon this earth who was an image-bearer of God, but this man has fallen. Now again there stands a man upon this earth, Who also bears that image, but this Man shall not and cannot fall, because He is at the same time the Son of the true God, yea God Himself.

Although it is true that He could not fall, because He is the Son of God and Himself is the true God, this does not signify that there shall not be a terrible conflict in the wilderness when the devil tempted Him to sin and to worship him. Certainly, a battle has been fought, a fierce battle, because the devil had contracted all his might and powers to bring, if it had been possible, also this Image-bearer of God to a fall. Three times Jesus was greatly and in a serious manner tempted, but also three times He triumphed over the devil. Through the power of the Spirit He has triumphed over all temptations and has revealed the lustre of God. The heavenly office-bearer begins His official labor by coming into a terrible battle with Satan. No, this conflict He has not despised or avoided, but through the Spirit which rested upon Him, He was led to the wilderness to fight this fierce conflict all alone. He shall attack the house of the strong man fully armed and rob him of the vessels which He shall merit for Himself. The prey shall be taken away from the mighty, and therefore Jesus came upon this earth. For that purpose He goes out and shall meet the devil and show him that, no matter what devices he uses, the triumph shall be the Lord’s. Never has Satan met such a One upon this earth. Did it not seem that the triumph was allotted to him? But God shall now show that the victory does not belong to the devil, but that the Lord Himself shall be victorious. It shall be to the eternal reproach of the devil, but to the eternal comfort of all God’s chosen ones. Therein shall God’s Church find holy pleasure, because out of the victory ot Jesus flows also the blessed deliverance of those, who were by nature a prey of the devil. Jesus shall cast Satan down and shall snatch away from him those who are His and who have been given to Him before the world was made. He shall manifest Himself to be that great Redeemer, Who can be their help at all times, “for in that He Himself hath suffered being tempted, He is able to succor them that are tempted.” Heb. 2:18. Therefore this portion of the Scripture is so full of comfort for God’s Church. All those who have been ransomed by Jesus’ blood and have been drawn by His Spirit out of the service of sin and world, are exposed here to many temptations of the devil. The natural man is a willing prey of sin and devil. He is of the father of lies and bears his image. He is not concerned about the things of the Lord, but goes forth willingly upon the way of destruction. O pitiful state in which we find man! Truly it is said, that next to the devil there is not a more unfortunate creature upon this earth. With all his false happiness in which he delights, he is really nothing but a slave of sin. But according to God’s sovereign pleasure the Spirit of Christ enters the heart and life of those He has bought with the precious price of His blood. Then the power of sin is broken; then the throne of Satan is cast down; then the great work is accomplished when God calls a sinner out of death into life. It is a fruit of Jesus’ victory: He destroyed Satan’s dominion; He bruised his head.

But yet the devil has much strength, although his prevailing power has been broken. He can yet exercise very great force. When he notices that the Spirit of God comes upon a person, he is there at once to tempt such souls. Natural people, who are only outward professors of the truth, do not know the power of the particular temptations which the devil brings upon those that are born again. Especially when it pleases God to glorify His work unto salvation, the devil will do all he can to disgrace and destroy the work of God. And in those temptations the child of God never has strength in himself. If it were not for the Lord Jesus, Who Himself was once tempted and knows the devices of the devil, and Who comes to help His people, they would surely perish. He certainly knows what power the devilish temptations have; He has experienced it Himself. He also knows that His children have no strength in themselves. Jesus is the Son of God, the sinless One and the Almighty. His children are full of carnal desires which fight against the Spirit and which would carry them away to be subject to the devil forever if He would not come to their help. When they experience the power of the temptations God’s children often feel forsaken, but it is not so. Oh, when they sigh against all that arises in them and weep on account of the wickedness and terrors of the enemy, it is Jesus Who then supports them secretly; yes, through the administration of the Spirit of Christ they also shall be instructed that they may learn to know the value of His triumph and to Whom they must call for help when the power of the devil would cast them down.

We may read so wonderfully in Bunyan’s Pilgrim’s Progress, that in his conflict with Apollyon, Christian was so wounded at a certain moment by the arrows of Apollyon, he fell to the ground very much exhausted. Besides this, his sword had fallen out of his hands. And with this he had almost pressed him to death, so that then Christian began to despair of life. Yes, it certainly can go that far and would go that far often if Jesus would not watch and rescue His dear one; because when Christian was lying in such deadly danger he was strengthened secretly, he could arise and exclaim: “In all these things we are more than conquerors through Him that loved us,” Rom. 8:37. He then gave Apollyon such a deadly thrust that he fled away wounded.

This is all precisely in accordance with the dear Word of God. If the love of this great Hero appears, upon Whom God has laid help for His distressed people, then it is through His strength that they also may gain the victory in the wilderness. For this reason He was tempted that He may in eternal love deliver His people. There He has triumphed, and therefore His people may and shall be victorious, to the praise of the Lord and the gladness of their heart.

It is necessary for them to know what temptations are, that they may learn to understand the power of Jesus to deliver them out of the same. We must now ask ourselves the question, have we in temptations learned to know the value of this Conqueror?

Never expect strength from yourself in this conflict, but only from Him Who can triumph, and Who has laid the prayer upon the lips and in the hearts of the members of His Church: And lead us not into temptation, but deliver us from evil; that is, since we are so weak in ourselves, that we cannot stand a moment; and besides this, since our mortal enemies, the devil, the world, and our own flesh, cease not to assault us, do Thou therefore preserve and strengthen us by the power of Thy Holy Spirit, that we may not be overcome in this spiritual warfare, but constantly and strenuously may resist our foes, till at last we obtain a complete victory.

We realize that we are living in a special time. Let us not close our eyes to the fact that dark clouds are gathering over our society. In regard to this we could enumerate many things such as the...

The Heidelberg Catechism in Questions and Answers (31)

Lord's Day51 126. Which is the fifth petition "And forgive us our debts as we forgive our debtors...

THE TRUTHS OF CHRIST IN A DIALOGUE

Article 4 (Continued) Letterwise Yes, as long as they are unconverted and have not been translated into the kingdom of the Son...

The apostle in this chapter particularly opposes some among the Christian Corinthians, who denied the resurrection of the dead, and infected the church with their doctrine. There were two sorts of...

Uitgave: THE TEMPTATION IN THE WILDERNESS