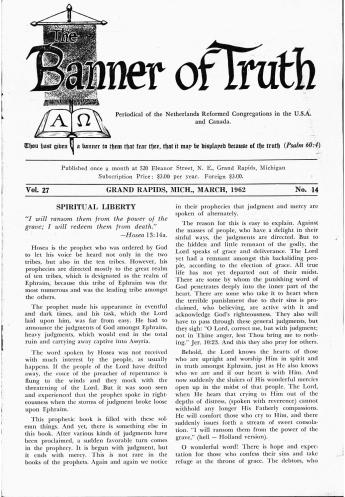 We have seen that in any discussion on the authority of Scripture we must not forget the demands which God makes upon His creatures. We must now remember that men are sinful creatures, and that they hate God. “There is none that seeketh after God.” Man refuses to take his rightful place, on his face in the dust before his Maker, but boasts that he is an independent being. “I am the master of my fate, I am the captain of my soul.” He tries to convince himself that he can function perfectly well apart from God, laughing at the demand that he must live to God’s glory.

It is this fact which causes man to love to set himself up as a judge over the Bible. “Let us approach it,” he says, with sweet reasonableness, “as we would any other history book, with an open mind, and ready to learn valuable lessons from it.” If ever we are tempted to be deceived by these avowals of innocence, we will be reminded by Paul that, as the natural man hates God, he therefore hates His Holy Word, because it speaks of God in His holiness, and reveals man in his vileness and rebellion. Man is not neutral — he is in the camp of the enemy.

But in his sin man goes even further. Not content with refusing to believe God’s Word himself, he feels it his duty to open the blind eyes of the unhappy Christians, and show them where they are in error. They must be delivered from this bondage of bowing to solemn authority of God’s Word. “Look here,” he patiently explains, “can’t you see that von people are iust arguing in a circle? You say you believe the Bible. Why do you believe it? Because the Bible says you must! You say the Bible is infallible. Why do you say this? Because the Bible itself claims to be infallible. You say Christ died for the ungodly. Why? Because the Bible says so. You are making one of the most elementary mistakes in logic. You are arguing in a circle.”

This then is the charge which is levelled against us. What is our defence? Very simple, we must acknowledge that the doctrine does involve a circular argument, but far from being on the defensive about this we must point out that in reality all reasoning is circular: it must be. You start with certain premises, and from these you argue to certain conclusions. The Christian must always argue from God, and seek “to think God’s thoughts after him.” The non-Christian begins, falsely, with himself and his independence, and argues from that. His reasoning is circular in concluding the Bible is not inspired; our reasoning is circular in concluding that it is indeed the very Word of God. But our circle begins with God, for we recognize that “in Him we live and move and have our being.” The Christian’s interpretation of facts must always be governed by the supreme fact of the existence of God. If we begin with this fact, and then go on to say that God has revealed Himself to sinful man in the Bible, then this very fact means that since it is God Who has revealed Himself, then it must be a perfect and an infallible revelation.

Timothy and the Holy Scriptures (2)

The saving knowledge of God. Q. What is the third book A. The Scripture, the Word of the living God, the Bible, all the books of the Old and New Testaments....

The Absolute Authority of the Word of God (2)

Thus saith the Lord! Did it ever occur to you that Paul and other Bible authors always fall back on the Word of God Although for some of them the Word, the Old Tes...

The Heidelberg Catechism (32) (Explained for Children)

This Lord’s Day begins the part of the catechism regarding thankfulness. You will remember from Lord’s Day 1 that the catechism speaks first about misery, then about deliverance, and finally about...