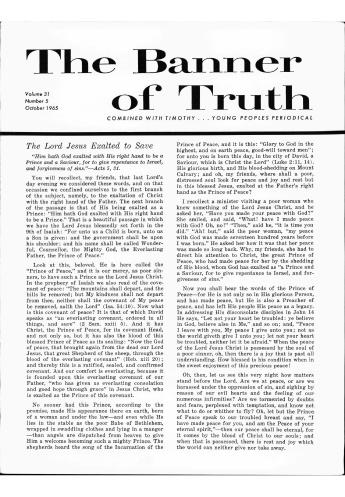 THE OLD CROSS AND THE NEW

All unannounced and mostly undetected, there has come, in modern times, a new Cross into popular evangelical circles. It is like the old Cross, but different: the likenesses are superficial; the differences, fundamental.

The old Cross would have no truce with the world. For Adam’s proud flesh it meant the end of the journey. It carried into effect the sentence imposed by the law of Sinai. The new Cross is not opposed to the human race. Rather, it is a friendly pal, and, if understood rightly, it is the source of oceans of good clean fun and innocent enjoyment. It lets Adam live without interference. His life motivation is unchanged; he still lives for his own pleasure; only now he takes delight in singing choruses and watching religious movies, instead of singing bawdy songs and drinking hard liquor. The accent is still on enjoyment, though the fun is now on a higher plane morally, if not intellectually.

The new Cross encourages a new and entirely different evangelistic approach. The evangelist does not demand renouncing the old life, before a new life can be received. He preaches, not contrasts, but similarities. He seeks to key into public interest by showing that Christianity makes no unpleasant demands; rather, it offers the same thing the world does, only on a higher level. Whatever the sin-mad world happens to be clamoring after at the moment is cleverly shown to be the very thing the Gospel offers, only the religious product is better.

The new Cross does not slay the sinner; it redirects him. It gears him to a cleaner and jollier way of living, and saves his self respect. To the self-assertive, it says, “Come and assert yourself for Christ.” To the egotist it says, “Come and do your boasting in the Lord.” To the thrill seeker it says, “Come and enjoy the thrill of Christian fellowship.” The Christian message is slanted in direction of the current vogue in order to make it acceptable to the public.

The philosophy back of this kind of thing may be sincere, but is sincerity does not save it from being false. It is false because it is blind. It misses completely the whole meaning of the Cross.

The old Cross is a symbol of death. It stands for the abrupt, violent end of a human being. The man in Roman times who took his Cross and started down the road, had already said goodbye to his friends. He was not coming back. He was not going out to have a life redirected; he was going out to have it ended. The Cross made no compromise; modified nothing — spared nothing; it slew all of the man completely, and for good. It did not try to keep on good terms with its victim. It struck cruel and hard, and when it had finished its work, the man was no more.

The race of Adam is under death sentence. There is no commutation, and no escape. God cannot approve any fruits of sin, however innocent they may appear, or beautiful to the eyes of men. God salvages the individual by liquidating him, and then raising him again to the newness of life.

That evangelism which draws friendly parallels between the ways of God and the ways of men is false to the Bible, and cruel to the souls of its hearers. The faith of Christ does not parallel the world; it intersects it. In coming to Christ we do not bring our old life up to a higher plane; we leave it at the Cross. The corn of wheat must fall into the ground and die.

We, who preach the Gospel, must not think of ourselves as public relations agents sent to establish good will betwen Christ and the world. We must not imagine ourselves commissioned to make Christ acceptable to big business, the press, or the world of sports, or modern education. We are not diplomats, but prophets; and our message is not a compromise, but an ultimatum.

God offers a new life, not an improved old life. The life He offers is life out of death. It stands always on the far side of the Cross. Whoever would possess it must pass under the rod. He must repudiate himself, and concur in God’s just sentence against him.

Whatever does this mean to the individual, the condemned man who would find life in Christ Jesus? How can this theology be translated into life? Simply, he must repent and believe. He must forsake his sins, and then go on to forsake himself. Let him cover nothing, defend nothing, excuse nothing. Let him not seek to make terms with God, but let him bow his head before the stroke of God’s stern displeasure, and acknowledge himself worthy to die.

Having done this, let him gaze with simple trust upon the risen Saviour, and from Him will come life and rebirth and cleansing and power. The Cross that ended the earthly life of Jesus now puts an end to the sinner; and the power that raised Christ from the dead, now raises him to a new life along with Christ.

To any who may object to this, or count it merely a narrow and private view of truth, let me say: God has set His hallmark of approval upon this message from Paul’s day to the present. Whether stated in these exact words or not, this has been the content of all preaching that has brought life and power to the world through the centuries. The mystics, the reformers, the revivalists, have put their emphasis here, and signs and wonders and mighty operations of the Holy Ghost gave witness to God’s approval.

Dare we, the heirs of such a legacy of power, tamper with the truth? Dare we, with our stubby pencils, erase the lines of the blueprint, or alter the pattern shown us on the Mount? May God forbid. Let us preach the old Cross, and we shall know the old power.

New Year’s Eve, and Staying Behind

Rev. J. den Hoed, Franklin Lakes, NJ The man who is speaking and being addressed is Jacob. All his possessions and family have crossed over t...

THE CALLED OUTThis call to leave the world occurs in one of the primary passages of the New Testament teaching the Christian doctrine of separation. The complete passage runs from 2 Cor. 6:1...

Gifts from the Ascended Christ

Thou hast received gifts for men.” The first gift that we realize and are taught in the Scriptures that Christ has brought into this world through His wonderful finished work (we read of it in John...

Not Zacchaeus, but Jesus

The history of Jesus’ travels upon this earth presents to us many striking scenes. The lowly and despised were sought out by Him, and the lofty were neglected or at times severely denounced. The te...

A Faithful Admonition in the Last Days

Approaching the end of his life, the apostle Peter wrote a second letter to the strangers who were scattered abroad. They were people who no longer felt at home here below. They were beset by trial...

Uitgave: THE OLD CROSS AND THE NEW