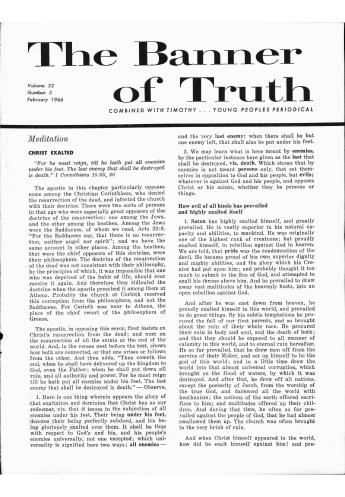 One of our readers asks how we must understand, in the face of all the impressive changes that are taking place in these days, the words of the Preacher when he says, “The thing that hath been, it is that which shall be; and that is done is that which shall be done: and there is no new thing under the sun.” (Eccl. 1:9)

In answering this question we must remark that the difficulty with these words is quite understandable when we notice the wonderful inventions of our days and the many new things that result from them. Surely, there are many things that were never heard of before.

Nevertheless, Solomon was not wrong when he spoke these words. We must also hold fast to the dogma that because of the inspiration of the Holy Spirit, the writers of the Bible could not err, so that God’s Word is the truth from word to word.

Then how must we understand the word “new”? Solomon here indicates that nothing can or will come outside of the original creative work of God.

With these words, therefore, he indicates the root or the deep source of all existing things, so that outside of God’s creation nothing can be really new, although it may seem so to our understanding.

There can be more development of many things we never heard of, but the seed existed long before, however deep it may have been hidden.

The deep origin of everything that exists or is discovered by development, etc., allows man to make discoveries and to develop them further.

Outside of God and His creation nothing can be discovered or developed. No spirit or man can do anything outside of it.

Because of our fall by which we are entirely corrupt in thoughts, words, and deeds, much has been developed that is more destructive than beneficial. In how many things we see that man invents something and also develops it, ultimately to his own destruction.

Because of the fall of Adam, the curse lies upon all creation and man has subjected himself in his covenant head Adam to the righteous judgment of death, and by his daily sins he increases the debt to God’s justice. By his deep fall man has become unable to do any real good, and is entirely corrupt in all things.

The fall of man did not come upon God unawares, and known unto God are all His works from the beginning of the world.

In eternity the Son of God according to the Father’s good pleasure gave Himself in the covenant in the form of a servant to bring about for the elect of His Father all that was necessary to bring them into the restored and reconciled communion with God. Yes, He gave Himself to deliver heaven and earth from the curse, so that one day there shall be a new heaven and earth.

To that end He came in the flesh and His Father sent Him. “When the fulness of the time was come, God sent forth His Son, made of a woman, made under the law.”

But although He would take upon Himself the sin of Adam, yet He could have no communion with Adam, for how then could He deliver him? The reproductive order given to Adam’s family was that the man compasses the woman, that was the ordinance of creation, but because of sin deliverance was impossible in this way. The question asked was quite in order, “How shall I put thee among the children, and give thee a pleasant land?” It was a hopeless case, from the side of man, ever to become reconciled to God again.

What a mystery of salvation then this word of the re-creating grace of God contains when the Lord testifies, “The Lord hath created a new thing on the earth, A woman shall compass a man.” That means that without any action or communion with a man, Mary would be with child and bear a Son.

She herself says, “How shall this be, seeing I know not a man?” Then the Lord unfolds the mystery of that new thing on the earth, “The Holy Ghost shall come upon thee, and the power of the Highest shall overshadow thee: therefore also that holy thing which shall be born of thee shall be called the Son of God.” (Luke 1:35)

How comforting it is for those who by the quickening, discovering work of the Holy Spirit experience that God by the way of re-creation has created a new thing in the earth, that is Christ, the Son of God in the flesh, and His satisfaction and reconciliation. In these, God’s eternal thoughts are realized, and one day the restoration of all that was destroyed by sin will be experienced to their eternal salvation.

Beloved reader, this is what Paul is asking of those who are at Rome, the beloved of God, called to be saints (Romans 1:7). In this eighth chapter he instructs them about a walk, not after the fles...

THE STRENGTH OF FAITH

Faith gives assurance to the people, who may possess this. It gives communion with God and Christ, it opens an invisible world. This is no imagination, but it is reality, it is true, it is experien...

The Heidelberg Catechism in Questions and Answers (6)

Lord's Day 8 24. How are these articles divided Into three parts; the first is of God the Father an...

God So Loved the World

A need for Clarification How very well known these words are! There is perhaps no passage in Scripture which is quoted more often throughout the world than the words...

The Handbook of the Sabbath

— continued —The keeping of the Sabbath promotes the same end in another way, by directing attention to Jehovah, not merely as the Creator, but as the Preserver and Benefactor of men. Not on...