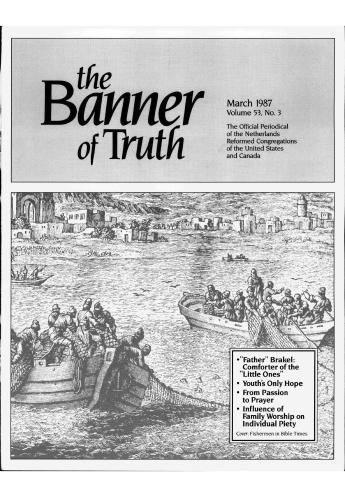 We meet the Lord Jesus as He enters Jericho. Many have come from far and near to see Him. They have heard of His powerful words and miracles.

Amongst them was Zacchaeus, who was chief among the publicans and who had become rich in earthly goods. But because he was small of stature and could not look over the shoulders of others, he ran to a sycamore tree and climbed into it so that he might have a glimpse of Jesus.

How great his astonishment must have been when Jesus stopped under the tree and looking up, called: “Zacchaeus, make haste and come down, for today I must abide at thy house.” We read that he made haste and came down. He had no might against the seeking and drawing love of the Lord.

How clearly we may see the fruit of true conversion when we see him coming out of the tree! In heaven there will have been joy over this sinner as he came down at the feet of Jesus. But here on earth not all were happy.

We read that the Pharisees murmured. They cannot understand that Jesus entered into the house of such a sinner; that He, Jesus, has time for such a person is something they cannot accept. But if the Lord did not have anything to do with such sinners, who then could be saved? Is not this precisely the message of the gospel? Is not this the glad message for all those who by grace have come to know themselves as such sinners? “For the Son of man is come to seek and to save that which was lost.”

We may see here the unspeakable love of Christ. In this text He gives Himself a remarkable name. He, the Son of Cod, was willing to become the Son of man, so that lost, wretched creatures could be saved through such a name.

In this name He points upward and downward. Son points “up,” man points “down.” By this He says, “I was rich, but have become poor so that poor ones may become rich.” No, He did not become Son of man because millions were standing with hands stretched toward heaven: “Oh, Son of man that Thou wouldest come to deliver us out of this great depth of misery!” No, He comes unasked, for none of the lost has ever stretched forth his hand and cried for His deliverance.

He came unto those who did not ask for Him. He came to deliver those who did not need Him. What an unspeakable love shines here! He, the most beloved of the Father, bows down to those lost ones. He, the Almighty, becomes the helpless child in the manger. He says farewell unto His angels and turns unto enemies. The angels, after their song, return home. But He remains in Bethlehem’s manger. He chose shame and the cross over heaven and glory. How He must have loved His Father’s good pleasure! How He must have loved the holy attributes of His Father!

It resounded in heaven, “Lo, Father, I come to do Thy will.” For the will of His Father He was willing to offer all. He would rather give all His heavenly glory than that those lost ones would perish. How very dear the message is that He came to seek and to save those who are lost.

What a tremendous impact the word “lost” must have for us! It speaks of the depth of our misery. Lost means there is no hope, no expectation anymore. Is this not so with all of us? We do not become lost, we are lost. We are dead in sins and trespasses from the moment we are conceived. And so deep is that lost state, that we can never deliver ourselves from it. We can only sink away deeper in sin and iniquity. And if the Lord does not prevent it then one day we will open our eyes in eternal condemnation.

So great is that lost state, that from self we will never turn to Him who has come to deliver the lost. What an eternal wonder that He does not wait until these lost ones come to Him, but that He says, “I have come to seek and to save them.” What a great truth there is in His promise! He sought a Levi, called him away from all what formerly had been his life. He stands under the sycamore tree and calls, “Make haste and come down.” He goes through Samaria for there is one there who also must be called. At the last moment He reaches out to a murderer on the cross who begins to cry, “Remember me when Thou art come into Thy kingdom.”

And also in this day He still goes about seeking those who are lost. He does that by His Word and Spirit. Each time the Word is preached, He comes and knocks upon the door of your heart saying, “You must be born again.” He does that even now as you read.

How terrible when time after time we turn ourselves against this, saying, “Depart from me; I have no desire for Thy ways.” What a blessing when we may lose the battle and when the Word, by a powerful operation, is placed in our hearts.

But God will not rest until they may all belong unto Him. He will take care that not one of them will be lost. Has He not bought them with the precious price of His blood?

That is why He can say, “I will give unto them eternal life.” And they will never be lost. No matter how sin and the world seeks to draw them away. No matter how great their unbelief becomes. It makes no difference how poor they have become. He will seek them out. For they are the Father’s chosen people.

And in His time they may hear: “Make haste and come down for today I must abide at thy house.” Today I may teach you that I have come to seek for lost ones. Then they may experience that they may be saved. Not because of anything of themselves, but because this is God’s desire. Then they may already begin to sing here, “Through Thee, through Thee alone because of Thine eternal good pleasure….” ?

A Gospel for the Poor

Uitgave: The Unspeakable Love of Christ