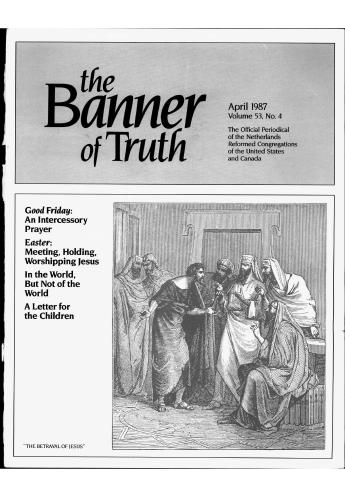 Many times we stand around the bedside of one who has come to the end of his earthly journey. The question is often asked, “Did he or she say something in the last moments of life?” Why is this asked? It is a desire to hear how matters are for the great eternity. What an infinite blessing when, from the lips of one dying, a testimony may be heard of what the Lord has done in the time which has gone by.

In Luke 23:34 we read, “Father, forgive them; for they know not what they do.” Listen here to the words of One who is dying. These words are very significant. The emphasis is not on the person Himself, but here upon the cross of Golgotha is the Son of God. He came down to this sin-cursed earth to assume unto Himself a human nature so that in this way He could become like unto His brethren. He came to deliver those people who are unable to deliver themselves, because their depravity is so deep, so great, that only the Son of God can deliver them out of this state of misery.

Let us listen to the words which came from His holy lips. He spoke to His Father concerning others. Before this He spoke many words unto men regarding the seriousness of life. “Verily, verily, I say unto thee, Except a man be born again, he cannot see the kingdom of God” (Jn. 3:3). Are these not serious words which speak concerning the necessity of God’s work in the heart of a man? He spoke words of comfort unto needy and sorrowing people, to a people who have been made rich by that one-sided work of the Lord, and whose eyes have been opened to their lost state. Their hearts sorrow after God and, because of inward experience, they often walk in the valley of darkness. But unto them He says, “Fear not, little flock, for it is your Father’s good pleasure to give you the kingdom.”

He spoke words concerning the coming judgment and how fearful it will be to die unconverted and meet a holy and just God, a God who must punish with an everlasting punishment. Of all this He spoke. But now in the last moments of His life, He does not say many words. But speaking unto His Father, He says, “Father, forgive them; for they know not what they do.”

The seven words on the cross are often likened unto seven lamps in the sanctuary. What a precious glow comes from this first lamp! They are words out of the mouth of Him who offers all for the guilt and sin of His people. All this was necessary to satisfy the just wrath of God.

Here at Golgotha, the place where criminals were executed, they have taken Him and nailed Him to the cross. It was an accursed death. He had to die this death in the place of His people who deserved death. There are no words to express the suffering of Christ upon the cross. He who knew no sin became the sin-offering for sinners. May you see Him, that is, the Lamb of God?

Here He is offering Himself because His people have nothing to offer. Here He enters into that darkness in which His people have freely cast themselves. Freely they have torn themselves away from their Creator. They have separated themselves from God, never to return. There they made a separation which could never be bridged by them.

What an eternal wonder that there were thoughts of peace in heaven, thoughts to lift such people out of the state of death, out of the mire of sin. But how? Is there really a need in your soul to hear this? Have you by the grace of God no other means unto salvation? Are all the foundations upon which you have rested so much taken away? Must you cry out, “Oh, Lord, my sins, my sins!” Are you longing for all that the Lord has given you in the past, that He may place a seal upon His own work? May you then draw a little closer unto the glow of this lamp upon Golgotha.

Here hangs the Lamb of God. The darkness of being eternally separated from God is already approaching for Him. Soon He will cry out, “My God, my God, why hast Thou forsaken Me?” Do you know why? So that now those people, who by the grace of God have learned that it would be righteous if the Lord would forsake them, will never be forsaken. There He hangs; hell rejoices. There hangs the Son of God.

Listen to the address in His intercessory prayer. He says, “Father.” In dying He calls upon His holy Father for the salvation of His church. Was there ever a more glorious address? He turns to His holy Father with the deepest confidence that He will hear Him. He who knows the heart of the Father, calls unto Him that He may show mercy, that He may bestow grace.

No, He did not address His Father for Himself, but for sinful, lost children of Adam. Are you interested in what He requests in His intercessory prayer? He says, “Forgive them.” Who are they?

Is this not a wonderful text for the universal redemptionist? He says, “ Do you hear this; God makes no distinction.” “Father, forgive them,” is heard out of the mouth of the Mediator of God, who suffered and died for the sins of all men. We must accept and believe.

What a fearful deception this is! Let us hold fast to the free and sovereign election of God. A truth which Jesus Himself spoke of, “I pray for them: I pray not for the world, but for them which Thou hast given Me; for they are Thine” (Jn. 17:9).

“Father, forgive them.” When the Son of Man is suffering the deepest agony, what does He see? First, at the foot of the cross, He sees Gentile wickedness. With low contempt they have taken Him. With great indifference they have used a hammer to drive nails through His precious body. They have viewed the precious blood which dripped from His sacred body with contempt.

Can you hear the intercessory prayer, “Father, forgive them? Do not come down in Thy holy wrath and consume all of mankind. Forgive them, Father, for they know not what they do. But give that now My gospel may go forth and enter into all the Gentile lands, so that all Thy chosen people may be gathered out of them. It is for them that I bring this offering unto Thy holy justice.”

Secondly, Jesus sees Jewish mockery. A few days before they had cried out, “Hosanna, blessed is He that cometh in the name of the Lord.” But their Messiah was one according to their own ideas. They do not need this Messiah, who reveals Himself as the Lamb of God. Their hearts are filled with enmity against Him.

How will it be, having known the way and wilfully turned away from it to go our own way, with hatred in our hearts against the way of God? For them there is no offering; they are not included in this intercessory prayer. But He sees many who are blindly led by the hatred of the Pharisees.

Oh, a dying Savior is praying for people who are enemies! That this would bring us in the dust, a place where we may plead that this prayer may be blessed to our hearts.

Once more may I try to bring you close to this intercessory prayer? From the cross Jesus sees, thirdly, the love of a broken heart. There stand Salome, Mary Magdalene, Mary the mother of James and Joses, Mary the mother of the Lord, and His disciples, a mixed gathering of people. This is the church, and it is their sins which have placed Him there. He says, “Father, forgive them.” What a blessed request!

But how can that Holy Judge forgive? The granting of this request cannot lie in those for whom He prays. But eternal wonder! The answer to this prayer lies in Him who prays. The reason that the Father can forgive lies in Him. That means that there is room at the cross. For whom? For a people who have no righteousness in themselves. All their foundations have crumbled.

“Father,” He says, “take them now by heart and hand; grant unto them what they cannot miss.” He did not pray for anything that would force the justice of God, but He pleaded upon His own finished work, upon that blood which speaks of better things than the blood of Abel. Abel’s blood cried for revenge, but His blood cries for forgiveness.

“Forgive them, for they know not what they do.” May you understand this prayer. Here nothing of man can avail. Yet how often we use our prayers to seek merit out of the shambles of a broken covenant of works: “Lord, give me time and I will pay all that I owe.” Is that not enmity against this dying Savior?

He prays, “Father, forgive them, for they know not what they do.” That prayer is for a people who so often have no prayer. Then their hearts can be so cold and their needs so few. “Forgive them. Accept my offering, and through it bestow Thy love upon them, so that Thy love may become all-in-all in their lives.”

This impressive article speaks of the glory of the exalted Mediator. It is about Christ’s intercession. It begins with the words, “We believe that we have no access unto God.” This becomes reality...

The First Word Spoken from the Cross

Rev. P.L. Bazen, Rock Valley, IA Christ spoke seven times from the cross of Calvary before His death. His sufferings began with His birth and...

Christ, The Servant of The Father

The small town of Nazareth was situated in the northern part of Galilee. It was despised by men, but not by the Lord. “Can any good come out of Nazareth ” was once the question of Nathanael unto P...

Rev. C. Vogelaar, Covell Avenue, Grand. Rapids, MI During the Passion months, we may hear the gospel of the bitter suffering of the Lord Jesu...