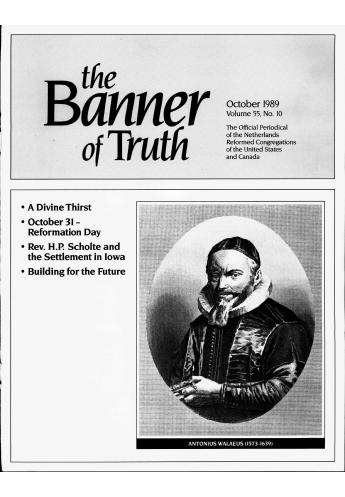 Rev. H.P. Scholte and the Settlement in Iowa

It was God’s hand that gave bread to those who hungered after the truth and graciously gave leaders to His wandering, scattered sheep. Although divisions and separations in the church can never be a cause of joy and gladness, we must consider that the Lord Himself sometimes allows circumstances to develop that make a separation inevitable for those who have tried to preserve unity. We must also remember that those separations actually have not been caused by those who loved and proclaimed the truth, but by those who had introduced new, unbiblical opinions regarding doctrine, church government, and ethical matters.

The men of the Secession, De Cock, Scholte, Van Velzen, Brummelkamp and Meerburg, were forced to leave the state church. Wherever they had an opportunity they proclaimed God’s Word to those who longed to hear the truth. However, it cannot be denied that one had a different approach to the difficulties confronting the church than the other; the one being more militant, outspoken, and quick-tempered; the other seeking to avoid conflicts and trying to preserve peace.

H. P. Scholte, for instance, was much more aggressive than the modest, tender-hearted and sometimes fearful “neighbor,” Gezelle Meerburg, who shepherded a flock in the area. Shortly after its beginning in the northern part of the country, the Secession movement continued and soon spread abroad to several other places.

Both the famous theologian, Kohlbrugge, and H.P. Scholte (who was born in 1805) were members of the Lutheran church in Amsterdam. When Scholte studied theology in Leiden, he organized and became the leader of a group of positive, Reformed theology students, which was called “The Club of Scholte.” To this “club” belonged young men who later would have a leading role in the Secession, namely, Brummelkamp, Van Velzen, and Meerburg.

As we stated already, Scholte was a very outspoken, militant person who did not try to hide his views on the sad situation of the church. He did not hesitate to call his colleagues in the ministry “priests of Baal” and “lying prophets.” Because of the ecclesiastical problems, he frequently corresponded with Rev. De Cock in Ulrum, who sent him a newly-published edition of the Canons of Dordt and the Compendium with an introduction by De Cock himself. Even with all De Cock’s decisions, we may not underestimate the influence of the gifted Scholte. For Scholte was the first who recognized the necessity to establish a free “refuge for the oppressed and hated children of Zion.” Some even call Scholte the actual initiator and cause of the Secession.

In the beginning of his ministry Scholte was already a suspected person in the eyes of the ecclesiastical authorities. This suspicion was confirmed by his criticism of his colleagues in the ministry and also his rejection of the Arminian hymns, the so-called “Evangelische gezangen,” which had to be sung in all churches.

When Scholte, without permission of the moderator, preached in Ulrum, it was considered a very serious offense, and reason for suspension. Three days later on November 1, 1834, Scholte’s consistory of the church in Doeveren presented an answer, an Act of Secession, quite similar to the one which was just made up in Ulrum, stating that Scholte was no longer able to live under such rules which placed human regulations above God’s testimony.

The Secession now began in the southern part of the country. Though there were resemblances between Ulrum (De Cock) and Doeveren (Scholte), there was a different emphasis in their views. De Cock was deeply convinced that the truth of free grace had to be defended and promoted, while Scholte mainly objected to unbiblical government and regulations of the church in those days. Scholte was strongly influenced by the “Reveil” movement and was quite independent in his views respecting the position of the local churches.

De Cock, Scholte, and many others had to endure imprisonment at the end of November and December, 1834. The enmity, mockery, and hatred they had to experience were sometimes terrible. It is difficult to imagine the degrading language and bitterness with which colleagues in the ministry addressed him.

After the publishing of the Act of Secession, Scholte received an official announcement that he had to leave his parsonage within three days. There was no mercy or any delay given, in spite of the fact that at the time his wife was bedridden with an illness.

Scholte then began to preach everywhere—in barns, in the open fields, or people’s homes and often used a farmer’s wagon as a pulpit. Meetings often were disturbed by rough soldiers, sent by the mayor of the town to prevent their illegal meetings. It seemed as if the former days of persecution against the Protestants by Rome had come back again. Although there were no burnings at the stakes there was imprisonment, oppression, enmity, discrimination, mockery, and public humiliation. One of the leaders of the Secession, Rev. Van Raalte, once said to someone, “What do you think? Will God ever grant us to see the day that we, freely, unharmed, and without fear, can walk on the streets or come in public?”

In the first years of the Secession, there was a very close friendship between De Cock and Scholte. De Cock wrote in Scholte’s poetry album: “Then Jonathan and David made a covenant, because he loved him as his own soul” (1 Samuel 18:3). Both friends signed this “covenant.” However, some differences of opinion appeared between them, namely, different views of the congregation, the official robes, and also of the church order. Scholte wanted to see the congregation as consisting of believers only, although he believed that there were probably some hypocrites among them who confessed faith without possessing it De Cock distinguished between (leden) the converted people who are really in the church, and (ledematen), members of the body, the unconverted, who are outwardly in the body of the church. We see that the opinion of Scholte was more idealistic, revealing a strong desire for a pure, holy church, but harmfully assuming that members who faithfully cling to the truth and attend church services are true believers. De Cock had a more realistic view, considering the fact that there has always been in the church wheat and chaff, good and bad fish.

Conflicts in the young secession churches grew so rapidly that it seemed as if the churches would soon be destroyed by it. Scholte was even suspended from his office by the decision at the major ecclesiastical meetings, but showed his independent convictions by continuing to preach as if nothing had happened.

Two camps stood over against each other: De Cock and Van Velzen, mainly supported by the northern provinces on the one side; and Scholte with Gezelle Meerburg on the other side. The former friends who were like David and Jonathan, now attacked and opposed each other’s views. The Lord took His wearied servant, De Cock, home out of the church militant during that time, but conflicts in the young churches would not be resolved until several years later.

In earlier years, Scholte had much influence, especially through the periodical, “The Reformation,” of which he was the editor, but slowly his authority began to decrease. It was evident that Scholte had his own deviating opinions, that he leaned toward the Darbists, and did not value the church as an institution or respect the offices instituted by God. To him the church was nothing but a fellowship of true believers. His ideas came close to the view of the Labadists and he also advocated the views of the milleniallists, a conviction which was not usually shared by the other leaders of the Secession.

There was the economic crisis, aggravated by a potato disease, which brought many to poverty. There were also the harsh government measures against the followers of the Secession, but above all it was the longing for freedom of religion as one of the main factors which promoted emigration to the “Promised Country,” the United States.

First, Rev. Van Raalte with some thousands of followers left the land where they had been bitterly persecuted, and established a settlement in western Michigan. Scholte then formed a “Christian Association for Emigration to North America” in Utrecht. After having overcome many organizational obstacles, he embarked with about one thousand people in the spring of 1847, to Iowa. The new immigrants, seeking refuge in a land of religious freedom, purchased a large area of good quality farmland and organized a town which they named Pella. Pella was named after the mountain city on the other side of the Jordan, which the early Christians fled to after Jerusalem was destroyed in A.D. 70 by the Romans.

Scholte became not only the religious, but also the social, political leader and guide for the immigrants in this part of the “New World.” He himself gave names to the streets of the new town. Those running from east to west received names as: North St., Columbus St., Washington St., Franklin St., Freedom St., Independent St., and others. The streets from north to south received names as: Fulfillment, Expectation, Confidence, Sub-missiveness, Experience, Thankfulness, Reformation, and Perseverance. Those who experienced this beginning would never forget how that “City of Straw” looked, with its cottages covered with prairie grass and its walls of sod, or even of large boxes, through which sometimes a snake crept into the house. Sometimes at night even the most courageous and fearless men were afraid when they heard the howling of wolves or saw the sky, red-colored by prairie fires.

Pella became the mother colony. The population increased rapidly so that the immigrants established new settlements in Sioux County and Orange City.

Scholte was a man of great erudition, with a poetic nature, an individualist with special gifts and inclined to go his own independent way in the new world in Iowa. When his followers gradually joined one of the Reformed, immigrant churches, either the Dutch Reformed or the Christian Reformed Church, he continued to be independent. For some time he preached in a church building of which he himself was the owner. But there came an end to the life of this restless organizer, preacher, and political leader. According to the death announcement by his mourning wife, his death came quite suddenly—at the age of almost sixty-three years. In God’s providence he had been used to lead many weary followers to Pella, a place of shelter and refuge for poor, persecuted Christians.

Blessed are they, who may have learned to flee unto another “Refuge,” as once everyone that was in debt, or was discontented, gathered themselves unto David, in the cave of Adullam.

Blessed are they who by grace may put their trust in Him who leads His people to a better fatherland. There He will receive all the honor and glory for all which He so graciously bestows upon them.

Uitgave: Rev. H.P. Scholte and the Settlement in Iowa