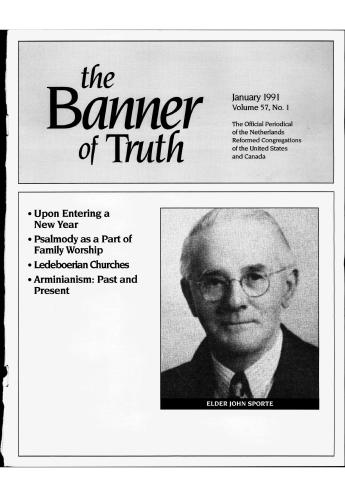 Psalmody as a Part of Family Worship

Good Mr. Philip Henry used to say that the singing of God’s people at family worship was a way to hold forth godliness to such as pass by their windows, like Rahab’s scarlet thread (Josh. 2:17). Sacred song is an instituted means of giving expression to every highly religious emotion. It has been adopted for this purpose in every form of religion known among men. Concerning its fitness for this end in the great assembly, there has been no controversy in the church. Never was the glory of divine song more exalted than in the ancient temple service. It was at once admitted into the primitive assemblies and has prevailed in all Christian churches. There has been no difference of judgment on this point in any of the Reformed churches. But we ask attention to the assertion, that there is no argument for sacred music in the church which does not hold equally good in the family. If a congregation has its joys and other elevated emotions, so has a family. If a congregation has cause to give utterance to these with “the voice of melody,” so has a family. If a congregation has voices which are fitted for this work, so has a family. In truth, what is a family but a domestic congregation, or “church in the house”?

Domestic psalmody is promotive of devotion. It is an exercise in which the voices of all join in the expression of sentiments which should be experienced by all. We trust we shall not be called upon to prove that the singing of God’s praise is eminently conducive to the awakening and maintenance of holy affections, and that it has been in every age employed by the Holy Spirit for this purpose. But we beg consideration of the statement that this is as true of the family as of the church. The peculiar exercises of soul which belong to families, as such, find expression in sacred song no less than those which belong to public assemblies. The godly sorrow, the trust, the adoration, the thanks, of a household, seem to require this channel for their flow.

Psalmody is a means of Christian instruction. In the early church many of the hymns were compendious formulas of doctrine, and such has been the case in every succeeding age. “Let the word of Christ dwell in you richly in all wisdom; teaching and admonishing one another in psalms and hymns and spiritual songs, singing with grace in your hearts to the Lord” (Col. 3:16). In this view it is wise to seize upon sacred poetry as a means of fastening truth on the infant mind. The daily practice of the family will, beyond anything else, familiarize the young with the choicest spiritual songs. In order that this may take place most fully, the selection should be careful and the number of hymns so used should not be too many. Where so much depends on repetition, there may be an inordinate passion for variety. A small circle of well adapted psalms and hymns is better than a great multitude, and the suggestion derives new importance from the extraordinary augmentation of our stock of religious compositions in verse.

The happy influence of spiritual songs is illustrated in the early churches of Germany. Luther was himself a poet and a musician and he bestowed on his country many of her noblest hymns and some of her finest melodies. In his writings he often alludes to this as one of the chosen agencies in the work of the Reformation; and this not merely in the church, but by the wayside and at home. He relates that in the earlier part of his labors he was moved to tears by hearing a wandering beggar, under his window, sing a hymn which has since become famous, but which Luther had never before heard.

The use of psalmody in family worship we believe to have been almost universal in the old Presbyterian Church of Scotland, as it has been laudably kept up until this day. That it tended in a high degree to increase the interest of all concerned in the service, and to promote Christian knowledge and sound piety, we cannot for a moment doubt.

Some are ready to say that psalmody cannot be maintained with ease in domestic worship because in many instances a majority of those present are children. It is strange that this objection should arise at the very period in which, above all that have preceded, juvenile instruction in music has been pursued with success. The concurrent testimony of all who have most largely examined and experimented on the matter is that no child has been found (unless in case of organic defect) who could not be taught to sing.

Family worship affords the most happy means of bringing forward infant voices in the praise of God. We have known of children who have joined without false intonation in the family Psalm before they could distinctly articulate a word. It is almost always an attractive and delightful part of the worship to youthful minds, and hence contributes to endear the circle of home. Above all, it makes this early impression, that the voice is to be trained for the glory of God as its best and happiest office.

We believe that the revival of psalmody in the house would contribute to train voices for the sanctuary. In order to have this effect, it should not be left to take care of itself or be executed in a careless, random way. Some pains should be taken to select suitable tunes and to make every member of the household familiar with them.

Conscientious regard to the spiritual aspect of divine praise will lead him who presides in family worship to look upon the selection of appropriate Psalms and hymns as a matter of great importance. He will not leave it to accident, but from the ample stores which we possess, will endeavor to choose such as may both be at the level of the capacity of his little flock and suited to carry up their hearts directly to God. These sacred compositions, we hope, will rest in the memory of our children when we shall be no more with them. No evil can arise from often recurring to the same hymns if these are in themselves excellent. The best hymns are those which are oftenest sung and which every one knows by heart. Those will have the largest stock in remembrance who have praised God all their lives at home.

No religious duty can be conducted aright unless the heart be in it, and there are special reasons why the thoughts and affections should be tempted to wander in the singing of God’s praise. How few, even in the largest worshipping assemblies, show by their demeanor that the words which are on their lips or on the lips of their substitutes in the work of praise are addressed to the present and heart-searching Jehovah! The soul may be entirely taken up in the musical part of the psalmody. No pains can be too great which may result in the awakening of solemn consideration in the minds of those who join in singing praise. Every symptom of levity should be repressed. An occasional remark, if solemnly and appropriately thrown in, before engaging in this duty, might often have a good effect. It is an offense against God to address Him in words of high moment, while perhaps, we have no thought of their meaning, still less any sympathy with their sentiment. Each of us should learn to say with sincerity, “I will sing with the spirit, and I will sing with the understanding also” (1 Cor. 14:15).

It would be a peculiar pleasure to the writer of these lines if he could know that he had succeeded in bringing the vocal praise of God into the daily worship of even a single household. Those who make the experiment will find a new spring of delight gushing out under the domestic vine and fig tree. They will rejoice in a fresh sweetener of their toils and anxieties, and a powerful instrument for quieting and training the souls of their children. It is mournful to think that a service which was so precious to our ancestors and which they made sacrifices to enjoy—even when under the sword of persecution—should die out of many Christian families in these days of peace when there is no lack of worldly rejoicings, “And the harp, and the viol, the tabret, and pipe, and wine, are in their feasts” (Isa. 5:12). There may be days in which we have scarcely the heart to sing by reason of deep anguish, but such are not the days of most. “Is any merry? let him sing Psalms” (Jas. 5:13). Before we totally hush the voice of thanksgiving in our tabernacle, let us break or banish the instruments of worldly music. No law can be laid down for those who have not the control of their own time, or those who, after every effort, are convinced that it is impossible for them to sing, but we would advise a shortening of the other services rather than the total omission of this. Such as have abundance of leisure should honor God by the Psalm and “make the voice of His praise to be heard.” (Ps. 66:8).

Dr. James W. Alexander (1804-1859), eldest son of the renowned Archibald Alexander, wrote many volumes on practical Christian Themes, including Plain Words to a Young Communicant (1854) and Thoughts on Preaching (1864). This article is drawn from his Thoughts on Family Worship (1847).

The person, whose office it is to lead in family worship, is undoubtedly the head of the household. The father is here in his proper place as the prophet and patriarch of his little household. In t...

The inspired Psalms alone are adapted to be vehicles of grace in the heart, and of praise to the Lord. “Singing with grace in your hearts unto the Lord.” Here we have the end to be reached. It is t...

To the reader:My design in this essay is to promote the singing of Psalms in families, as a part of their daily worship, especially their Sabbath worship; an exercise which (however it be no...

The Influence of Family Worship on Posterity (2)

(3) “I have no time for family worship.” In the hurry of our great cities it is painful to observe the preference given to mammon over God. Look at the living tide which rolls every morning down su...

Uitgave: Psalmody as a Part of Family Worship