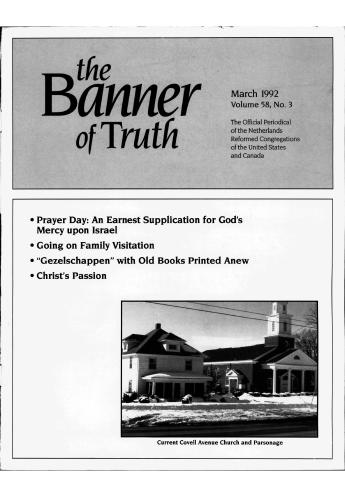 An Address to Young People: Excuses for the Neglect of Religion (5)

The only remaining excuse for the neglect of religion which I shall notice, is, that there is time enough yet.

And what is it, my young friend, for which you are so sure that you have time enough remaining? Is it merely a momentary turning of your thoughts away from the world, or yielding yourself for an hour to the impression of eternal things, or performing a little lip service which you call prayer, or doing the drudgery of a few external duties? Oh no, it is nothing like this. It is the breaking off of right hand sins. It is the mortification of evil affections. It is the yielding up the whole heart to God. It is the consecration of the whole man to His service and glory. And is this a work of so small moment that you can safely put it off to another day, on the ground that there is time enough yet for the performance of it?

Besides, let it not be forgotten that religion lays its demands upon all your faculties and affections, through every moment of your existence. Have you time enough then for doing that later on which devolves upon you at this moment, when each future moment will bring with it its own appropriate duties? If all that you can possibly do in the next hour is demanded of you during that hour, how will you find time then for doing the duties which devolve upon you now? Perhaps, however, you only mean that there is time enough yet — that is, some more convenient season than the present — for exercising that repentance of sin which is necessary to secure your salvation.

But there are two things of which you ought to feel absolutely assured before you make up your mind to defer repentance to any future period. In the first place, in order to justify such a resolution, you must be certain of the continuance of life. You must have gained an assurance that, notwithstanding the arrows of death are thickly flying around you, and every day numbers its victims for the tomb, yet amidst all this desolation, your life, for some indefinite period, shall certainly be preserved. And this you must know on the authority of Him in whose hand your breath is; for He only who fixes the bounds of our habitation is competent to assure you of the continuance of life even for a moment And then again, you must be assured that God will grant you grace to repent, and will accept your repentance at a future day. You must be able to point to some declaration in the Bible which makes it certain that the Holy Spirit, whose influences you now resist, will hereafter visit your soul again; and if He should, that you will be more disposed to cherish His influences than you are now. But on both these points, you cannot but know that the evidence is all against you. There are voices from a thousand graves admonishing you that you cannot presume on the continuance of life, even till tomorrow. And there is the practical testimony of many a sinner, whose heart, by procrastination, has become as hard as the nether millstone. Thus in calculating on the future efficacious operations of the Holy Spirit, you have all probability against you.

But if you persevere in saying that there is time enough yet, let me ask you to define the particular period which you have allotted to the performance of this work. Is it the period of middle age? Look then, I pray you, to the man who has actually reached that period, and judge candidly whether his advantages for becoming religious are increased beyond what they were in the season of youth. Is there anything in the pressure of worldly care, in the claims of a rising family, in the numerous and distracting demands upon time which that period so commonly brings with it, that is favorable to the work of repentance — a work which demands reflection, and self-communion, and abstraction from the world? And if middle age does not furnish better advantages than youth for becoming religious, let me ask again, is it more likely to bring with it the disposition? Is it in accordance with the known principles of human nature that a habit of any kind should grow weaker by being cherished? Or may not the exact opposite of this be anticipated, with as much confidence as any effect can be looked for from its appropriate cause? And if experience be consulted, where are the individuals to testify that familiarity with the world has strengthened the resolution or the desire to become religious? No, my young friends, the difference between the period to which you are looking forward, and that through which you are now passing, is altogether in favor of the latter. If, therefore, you leave the season of youth strangers to religion, it is more than probable, if your life should be spared, that you will leave the season of manhood with the same character.

But possibly when you say that there is time enough yet, you are looking forward to a period still more distant — to the season of old age. I cannot forbear saying at the outset that it is only possible that you may live to that period, the chances, according to the principles of human calculation, being altogether against you. But suppose, by a comparatively rare dispensation, your life should be protracted even to fourscore years, I ask you what there will be in your condition then to facilitate the great work to which I am urging you? With a mind not improbably broken by age, or paralyzed by disease; with habits which have been the regular growth of almost a century; with little of the power, and still less of the disposition, to reflect closely or for a long time upon any subject — is there not little probability that the great work of repentance will ever be seriously thought of — still less, earnestly attempted — least of all, actually performed? I know there is here and there a miracle of mercy wrought in the conversion of an aged sinner; but when such instances occur, they occasion surprise, and every Christian is ready to exclaim, “What hath God wrought!” Dare not, my young friend, to stake your immortal interests on such a fearful uncertainty!

But I am not certain that there are none of you who, in pleading that there is time enough yet, may not be secretly flattering yourselves with the hope of a deathbed repentance. But do you really think that you shall be able to meet and answer the claims which God makes upon you, by convulsive efforts of your last hour? Who then has told you, after you have spent a life of rebellion against God, that He will grant you grace to repent while the last moments of your probation are on the wing? Or where has God promised that He will listen to that cry for mercy which is prompted by the terrors of an opening retribution? Or how do you know that you may not, like multitudes of others, die in a state of spiritual insensibility, being actually abandoned of God to a reprobate mind? Or what evidence have you that your last sickness may not be the sickness of a moment, and your passage into eternity in the twinkling of an eye? Or if it should be protracted, who can tell but that you may be given up to the wild horrors of delirium, and be utterly insensible to your condition, until death has actually done its work? I say nothing in respect to particular instances of deathbed repentance, but in general, there is everything to show that little or no dependence is to be placed upon them. Oh, beware how you defer the concerns of religion till your closing hour!

What then, my young friends, is the great practical inference from all that has been said under this article, and from the general tenor of this discourse? It is this: “Behold now”— now in the days of your youth — “is the accepted time.” We have examined the apologies with which you are prone to put off religion, and have shown you that they amount to nothing. Dismiss not, I entreat you, the practical contemplation of this subject, until the effect of it has been to make you realize that there is no time to be lost in pursuing your immortal interests. May God graciously grant you to ask with agonizing earnestness, the momentous question, “What must I do to be saved?”

Rev. William B. Sprague (1795-1876) was a well-known Calvinistic, Presbyterian pastor who served West Springfield, Massachusetts for ten years and Albany, New York for forty years. He published 165 sermons and fourteen books, several of which were written for young people. This address is taken from his Lectures to Young People, recently reprinted by Sprinkle Publications, P.O. Box 1094, Harrisonburg, VA 22801.

Rev. J. den Hoed, Franklin Lakes, NJ It is quite certain that, among my readers, there is no one who is not acquainted with sorrow. How many of us have wept tears...

Repentance seems to be a bitter pill to take, but it is to purge out the bad humor of sin. By some Antinomians it is rejected as a legal doctrine; but Christ Himself preached it. “From that time Je...

(3) “I have no time for family worship.” In the hurry of our great cities it is painful to observe the preference given to mammon over God. Look at the living tide which rolls every morning down su...

The fall of Adam involved both himself and his posterity in sin and ruin. From the moment of the first transgression, sin challenged universal empire. From that fatal hour, it began to assume domin...

Old Year: The Longsuffering of the Lord

Uitgave: An Address to Young People: Excuses for the Neglect of Religion (5)