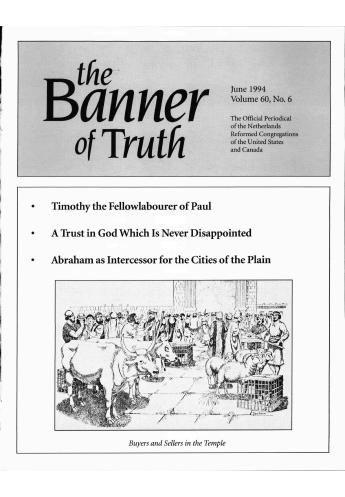 Abraham as Intercessor for the Cities of the Plain

The first part of this chapter tells how Abraham received his special guests and prepared an extensive meal for them. At the end of their visit the Lord announced that the following year Sarah would receive a son. She could not believe this and laughed. The Lord showed that He is omniscient and reproved her mildly.

The time had come that these men would travel farther. According to Oriental politeness, Abraham showed them the way. We know that his guest was the Angel of the Covenant or the Son of God, accompanied by two angels. On their way toward Sodom God began to speak, “And the Lord said, Shall I hide from Abraham that thing which I do?”

This shows that Abraham was a friend of God from whom He had no secrets. In the Septuagint there is written in this text behind Abraham’s name, “my son.” Philo reads, “my friend.” In James 2:23 Abraham is called “the Friend of God.” We find the same in Isaiah 41:8. It is a great honor to receive the name “a friend of God.” By nature it is the opposite, because we are enemies of God. What a blessing that there is mentioned in God’s Word that enemies can be reconciled with God. The best time to seek the Lord is in our youth, young people.

This spoken revelation was a special grace bestowed on Abraham, since the Lord revealed to him what would happen. In this way of verbal revelation, the Lord no longer speaks as He did to the patriarchs. However, the secret counsel of God with respect to our salvation He now reveals in His Word. Remember how the rich man in the parable asked Abraham to send Lazarus to this earth to warn his brothers (Luke 16:24-31). The answer was, “They have Moses and the prophets.”

“My son, my daughter, give Me your heart. Do not give your heart to the world and its pleasures, but to Me.”

Still, it happens once in awhile that in special cases the Lord will reveal to His people what the future will bring. We have heard that prior to the Second World War many of God’s people received revelations that the judgments of the Lord were near. When the Lord speaks, it will come to pass, and this can even be after the death of the person who received that word. We see this also in this history. Abraham received the promise that his descendants would inherit Canaan, but it was fulfilled several centuries after his death.

This means that the Lord knew Abraham out of free and sovereign grace, because God is not a respecter of persons. The Lord does it for His Name’s sake, since in us nothing is good in His eyes. But in spite of how long we have lived in sin or in self-righteousness, at His time He will bring His children from death to life.

All throughout Scripture we find that all things are known by the Lord. But here He says He knows Abraham, who may also hear this. When this assurance is given to a child of God, then it is not in the beginning of the way, but takes place later on. Comrie wrote, “You meet people who only have put a few steps on the way of life, and who, if it is of the Lord, come with truths like, ‘I have loved thee with an eternal love’” (Jeremiah 31:3). Usually this is not the way the Lord leads His people. He instructs them later, further on the way, we would say, in these mysteries of salvation, although the Lord is free. Some of the concerned church have been allowed to see something of the assurance of salvation, as we know of the disciples (Luke 10:20). Abraham was already twenty-four years on the narrow path when he heard this comforting word of the Lord.

Further the Lord repeated that Abraham would become a great and mighty nation, in whom all the nations of the earth would be blessed. This pointed to the coming Messiah, who would be born out of Abraham. The father of the faithful knew much about the love and mercy of God, but he must know Him also as a holy and righteous God who punishes sin. As he instructed his descendants, they would hear from him what is waiting when they forsake the Lord and do not listen to His warnings. The history of Sodom and Gomorrah has a particular place in the Bible for all ages. It contains a very serious warning for the church and for the world.

Notwithstanding these serious warnings to keep God’s commandments, we often see the opposite today. There is a multiplying of sin as in the days of Sodom and Gomorrah. How necessary to call for a return to morality, as it is revealed in God’s Word. Alas, there are no signs visible that this is happening. Therefore the Lord has a controversy with us. He urges us, “My son, my daughter, give Me your heart. Do not give your heart to the world and its pleasures, but to Me.” How necessary it is for us that by the preaching or reading of God’s Word, under the operation of the Holy Spirit, we receive an impression that, unless we turn away from sin and the world and begin to hate them, we do not belong to the spiritual seed of Abraham. We will not be a partaker of the mercy of the Lord, but the judgments will come over us as they did on Sodom and Gomorrah. The judgment that came over these cities is an exhortation to us to fight against sin.

The Lord was on His way to these cities and testified of them, “Because the cry of Sodom and Gomorrah is great, and because their sin is very grievous” (verse 20). This means that their wickedness was widely known and cried for punishment, for revenge, just as we read of the blood of Abel. What their crying sins were, we hope to see another time, D.V. Our fathers also spoke of crying sins which were publicly committed without any shame.

It is true that we are all sinners before God; the prophet Isaiah called the whole nation of Israel the people of Gomorrah, and their leaders were called the rulers of Sodom (Isaiah 1:10). An old saying reads, “A chimney is black inside, but it is a privilege when the smoke does not come out of it.” When iniquity is committed shamelessly and the sinner does not even blush with shame anymore, or even tries to explain sin away, then we can speak of crying sins. It was for this reason that the Lord came with His judgment over these five cities when the cup of iniquity was full.

Not only the sin of these cities cried to heaven, but today there are also other sins, especially when we think of abortion, which is permitted and so prevalent in our countries. It is to be expected that it soon will be followed by euthanasia, as it is already in the Netherlands. Also the oppression of God’s people, of widows, and of orphans are sins which cry to heaven for revenge. And the Lord does hear them, as we see in this history. The Lord was on His way to these wicked cities.

In a human way of expression, here it is written that the Lord would go down to see the condition of the cities. As worldly judges must make accurate examinations of all the facts, so the Lord did also in this instance. There was no doubt with the Lord about these crying sins. The question was whether or not this visit would fill the cup of iniquity. If they continued on their sinful way, then the judgment would be unavoidable.

The two angels departed in the direction of the cities, but Abraham stood yet before the Lord. What a great privilege it is for God’s people to be alone with God. Has this ever happened in our life? Then it is full! Think of the woman of Samaria, who forgot her vessel, being so full of the presence of the Lord and His instruction. At such a time the world has no value, but the Lord is everything. It is the longing of God’s people to have more of those blessed moments. It does not happen every day, but the Lord is a faithful God, who remembers the needs of His church. He knows exactly when they become mired in themselves, and then He will come with haste to deliver. The prince of darkness tries to portray the service of the Lord differently, but the reality is that the Lord makes it so well with them that they will speak well of the Lord. As I write this, I think of one of God’s servants, who, humanly speaking, is close to the end of his life due to a very serious illness. One does not hear him speak about his pain, but he may speak well of the Lord.

A principle by which a Christian should walk is this: That no present worldly business should interrupt his pursuit of future blessedness. Solomon says, “All the labour of man is for his mouth” (Ecclesiastes 6:7). Though he says it is so, yet he does not say it should be so.

When Crates threw his gold into the sea, he cried out, “I will destroy you, lest you should destroy me.” Thus, if the world be not put to death here, it will put us to death hereafter. Then we shall say, as Cardinal Wolsey, when discarded by his prince, and abandoned to the fury of his enemies, “If I had served my God as faithfully as my king, He would not have thus forsaken me.”

Part IMankind lives and works for his future. He directs his thoughts to the time that yet must come. Especially young people have many ideals which they will try to realize. These expectati...

The Life of Abraham: He Witnesses God’s Judgment

Genesis 16 This chapter speaks of the destruction of the cities of the plain. This history is more related to Lot and his family than to Abraham. But this chapter do...

Abraham in the Land of the Philistines: XVII (2)

Genesis 20 In the previous article we have seen that Abraham and Sarah went to the land of the Philistines. There was fulfilled what is written in the last Lord’s Da...

The Life of Abraham: He Witnesses God’s Judgment — Part 2

Genesis 19 In the previous article we tried to explain why the judgment of the Lord had come over the cities of the plain: it was because of their gre...

The Tempting of Abraham (1)

Genesis 22:1-10 In this chapter we come to an event which formed the highlight of Abraham’s life of faith. This highlight he reached because God led h...

Uitgave: Abraham as Intercessor for the Cities of the Plain