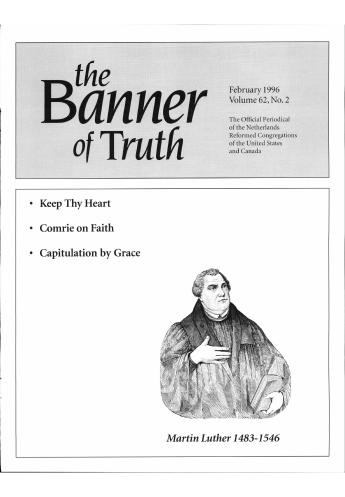 Third objection: Separating preaching would supposedly degenerate into preaching the Christian instead of preaching Christ; into a preaching of marks, where man ends up in the center.

We want to be brief regarding this final objection. Some characterize the preaching which has been heard from olden times in our congregations as a preaching of the Christian, or a preaching of marks. People usually do not shrink from turning this preaching into an awful caricature. As evidence we quote, for the last time in these articles, from Dr. Brienen’s dissertation, in which he brings up our congregations for discussion in the following manner: “That which we found here and there among the ‘Christelijk Gereformeerden’ [Free Reformed] and more strongly among the ‘Gereformeerde bonders’ [Reformed Fellowship, a part of the Nederlands Hervormde Kerk, here the Reformed Church of America] is generally current in the preaching of the so-called ‘black stocking’ churches, among which people generally count the ‘Gereformeerde Gemeenten’ [Netherlands Reformed Congregations and the Reformed Congregations of North America], the ‘Oud-Gereformeerden’ [Old Reformed], and a number of smaller groups and free congregations.... In their sermons the doctrine of election determines the caesura [the dividing line]. The reprobate stand on the left hand side, the elect on the right hand side. In the preaching, therefore, people are confronted with the question whether they know to be elected and converted...” (p. 239).

Actually we have no desire to quote any further. Even apart from the mocking label which the author places upon our congregations (a mockery which certainly does not belong in an academic dissertation), we have to say from the bottom of our heart that someone who describes the preaching in our congregations in such a way does not know this preaching. This is not the way ministers preach in our congregations. In our preaching the line of division does not run between the reprobate and the elect, but between the unconverted and God’s children, and that is something entirely different. A reprobate cannot be converted anymore, but an unconverted person still can be converted. Who of our ministers ever directs himself in one of his sermons to the reprobate? Would we know who are reprobate? And is our preaching rightly characterized when it is said that we confront the people with the question of whether they know whether they are one of the elect? Indeed not! When we saw which source he used to sketch the preaching in our congregations, we were already afraid that here Dr. Brienen would go off the right track. That source consists mainly of the book, De zwarte-kousen kerken [The Black Stocking Churches], by A. van der Meiden. Truly, there are indeed better sources than this book by which one can become acquainted with our preaching.

We wholeheartedly subscribe that the right preaching is preaching Christ. The word of the apostle is clear enough in this respect: “For I determined not to know any thing among you, save Jesus Christ, and Him crucified” (1 Corinthians 2:2). But now the question is: What is preaching Christ? One should not think that a minister preaches Christ if he only uses the name of Christ many times! Someone has rightly pointed out that in many sermons of Calvin the name of Christ is hardly mentioned, or not at all, while his preaching may nevertheless be called fully preaching Christ (Prof. C. Veenhof, Zicht op Calvijn, p. 80). For many, preaching Christ is that kind of preaching which does not elaborate too much about the knowledge of misery, but appeals to all hearers to go to Jesus; you will get to know your sins, so goes the saying, at the cross. In this kind of preaching salvation becomes some kind of a safety buoy, which God throws towards all hearers, but we ourselves still have to grab. Whatever names we could give to these kinds of preaching, I would not want to call them preaching Christ.

What, then, is preaching Christ? It is that preaching wherein He is proclaimed as He is: as the One sent of the Father; as the eternal Surety; as Savior, anointed to be Prophet, Priest, and King; as God and Man in one Person; as the humbled Mediator in the ways of His suffering; as the Exalted One on the right hand of the Father. But it is also as He reveals Himself in the life of His own: as He makes room for Himself by His Spirit in a way of convicting and discovering of guilt; as He functions in His offices in the soul-life of His people. One should read in this connection the book by Professor G. Wisse, De ambtelijke bediening van den Christus in de gelovigen [published in English as Christ’s Ministry in the Christian]. That is the way we wish to preach Him. After all, in such a preaching God’s children receive provision for the way, and the King is glorified. Surely, we will also have to guard against the danger of a seemingly experimental preaching, in which, indeed, many precious frames and conditions of the soul are listed, but in which the proclamation of the only ground of salvation is entirely missing. Then, indeed, man ends up in the center. However, one would do great injustice to the preaching of the Nearer Reformation if one would upbraid it with this accusation. That preaching was fully preaching Christ (one should read Hellenbroek’s Keurstoffen [Choice Sermons]!) and, at the same time, it powerfully separated according to state and standing. Therefore separating preaching and preaching Christ are no contradiction!

Finally, as far as preaching marks is concerned, the minister of the Word will always have to guard against preaching the marks in such a way that they begin to function as a ground of being saved. Preaching enters a wrong track if the hearers are assured that it is well with them if they have knowledge of this or that experience. In the right preaching it must be pointed out continually that the soul may find rest only in that place in which the Lord gives rest, namely, in the finished work of Christ. That is how the men of the Reformation and the Nearer Reformation preached. The preaching among us also remains that way.

In such a preaching, however, the marks of spiritual life do truly receive their place. If we see it correctly, mentioning the marks serves a twofold purpose. In the first place, the marks of spiritual life serve to the encouragement and comfort of God’s children. It is not to be regarded a little thing if “our life is declared sometimes.” This has nothing to do with emotionalism or with unhealthy pietism, but is entirely according to Scripture and confession. Very comfortingly the chief prophet and Teacher preached the marks of the life of grace in the Beatitudes of Matthew 5. Clearly the Catechism states in Lord’s Day 32, that “every one may be [should be] assured in himself of his faith, by the fruits thereof.” No less clearly do our Canons of Dordt say that the elect in due time, though in various degrees and in different measures, attain the assurance of their eternal election “by observing in themselves with a spiritual joy and holy pleasure, the infallible fruits of election pointed out in the Word of God” (I, 12).

In the second place, the marks of spiritual life must be preached unto the discovery of those who miss the life that is of God. In every sermon the congregation has to hear how God converts a person. That does not mean that in every sermon the entire order of salvation has to be dealt with, but it does mean that everyone who is sitting under the Word can clearly hear how it goes in the life of God’s children. Those with “the imitation work that comes so close” are painfully reminded of that which they are missing, and this largely explains the enmity which will always and everywhere manifest itself against this preaching.

For those who would like to trace how the marks of the life of grace were dealt with in the preaching of the days of the Nearer Reformation, we would like to recommend three books: the one hundred forty-five sermons of Bernardus Smytegelt about Het Gekrookte Riet [The Bruised Reed], the A. B. C. of Faith, by Alexander Comrie, and Toetsteen van ware en valse genade [Touchstone of True and False Grace], by Theodorus van der Groe.

In a few articles we have shed some light upon some aspects of separating preaching. We attempted to indicate what this preaching means, where its roots lie in Holy Scripture, in the confessional writings, and in church history; we saw how it has been, and still is, assailed. We want to state this petition: May the Lord keep our congregations with this preaching. May He arouse in the hearts of many, especially in the hearts of our young people, love for that preaching, and by it may He build and edify His Church in its length, breadth, and depth.

Our Walk of Life The congregation is not the congregation of the Lord on Sunday only, but during the entire week. That is true for our personal walk with the Lord, t...

We have now arrived at the discussion of a second objection against separating preaching. Calvin supposedly preached so entirely differently from the men of the Nearer Reformation, and also so enti...

Rev. J.J. Van Eckeveld, Zeist, the Netherlands Paul as a preacher of Christ When Scripture is faithfully prea...

Steps in the Life of Grace (1)

Rev. J.M.D. de Heer, Middleburg, the Netherlands There are subjects in church life which attract more than the customary interest. They often...