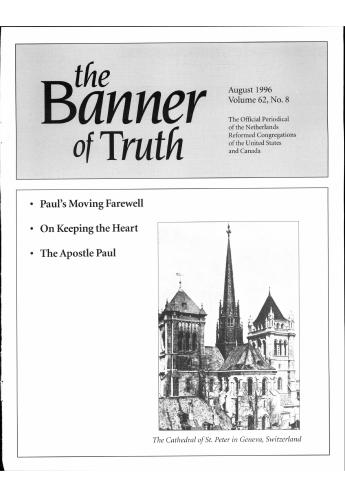 Not Zacchaeus, but Jesus

The history of Jesus’ travels upon this earth presents to us many striking scenes. The lowly and despised were sought out by Him, and the lofty were neglected or at times severely denounced. The text taken from this present event again points to this.

However, as we read of these happenings in God’s Word, we must also look at the context and take notice of the circumstances. That which is mentioned in connection with Zacchaeus could lead to extensive comments about the life of Zacchaeus, with possible speculations which are not given us in God’s Word. We could speak about him and preach entire sermons as to how he came unto, in, and down from the tree. The subject of much discussion could be about when Zacchaeus was actually converted, one saying this and another saying something else. Do we then not pass by the purpose of God’s Word, and, in doing so, also the purpose it has for us?

In the history of Zacchaeus, it is not in the first place about Zacchaeus, even though it was so important for him that Jesus appeared in his life, but about the Son of man, as Jesus is called in our text. For our Bible is a revelation of God. The events, both of the Old and the New Testaments, direct us unto Him who was to come or has come. It is in this way that we ought to read our Bible, always with the personal question as to whether He, the despised One, has also come for me. Has He appeared in our life? What do I know of that only Name which is given under heaven? What think ye of Christ, in a really personal way? This then must not be in mere outward considerations and discussions.

Does one come at once to Jesus? In a natural way there is also a way unto Jesus. This was also known by Zacchaeus. We also know that with all the considerations, also in regard to Zacchaeus, the knowledge of misery precedes the deliverance in Christ. But can we rest in this knowledge of misery? There is certainly but one Name. This is so clearly shown in this text. He is come to seek! But what is He seeking? It is “that which was lost.” It concerns the lost.

Are not all of us lost? Naturally we are. But what prompted Zacchaeus? It was the knowledge of his lost condition, for otherwise one does not go out seeking. Isn’t it remarkable that it is just in this respect that this is here spoken of? All who saw it murmured, although they were also lost, but, as far as we know, had not experienced it.

Here it concerns the Son of man. He is come to save, thus to bring from the greatest evil unto the greatest good. The work of the Savior is not only to seek the lost, but also by His priestly ministration to bring about a righteousness which we lost in our covenant head Adam. Everything was squandered, lost, and cast away, and therefore we are lost. God made the way. The revelation of God in His righteousness is happily also a revelation of Jesus in His mercy. This is also declared in the Word.

Happily we have that most sure Word of prophecy. He was willing to become the Son of man, the Word which was made flesh, not only to proclaim the way of salvation, but also to merit it. See Him in His suffering, and also in His association with an evil and corrupt generation. He has saved His own; they were lost. He is seeking!

What effect does the history of Zacchaeus have upon us? For it is to this question that the events in God’s Word and the revelation of God must always bring us.

It is an eternal wonder that God has provided a perfect Lamb for totally lost sinners. He is the only Remedy for incurable diseases, the precious Surety for those who deserve eternal death and have...

We meet the Lord Jesus as He enters Jericho. Many have come from far and near to see Him. They have heard of His powerful words and miracles.Amongst them was Zacchaeus, who was chief among t...

KNOWING GOD’S WILL THROUGH SCRIPTURE

The following article is extracted from chapter 2 of Sinclair Ferguson’s practical Banner of Truth Trust title, Discovering God’s Will. It underscores a s...

Uitgave: Not Zacchaeus, but Jesus