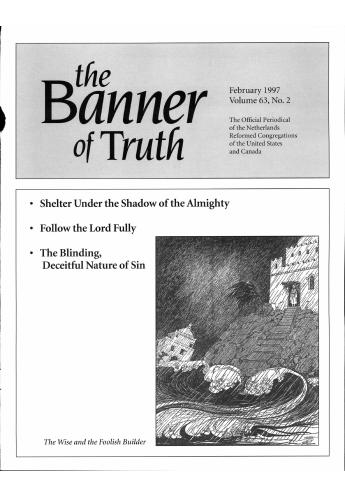 This is again an article of faith, not just of a personal faith, but of all believers.

“We believe, since this holy congregation ... ” refers to what we have read in Article XXVII. This is a holy congregation of true Christian believers, all expecting their salvation in Jesus Christ, being washed by His blood, sanctified and sealed by the Holy Ghost. The word congregation is derived from Latin and means flocked together. They are not just around an under-shepherd, but under the Chief Shepherd of the sheep, Jesus Christ. For He is the One who assembles those who were no sheep and who gathers them together. He says in John 10, “Other sheep I have, which are not of this fold: them also I must bring, and they shall hear My voice; and there shall be one fold, and one Shepherd.”

You may say, “Is that not too high?” Many living members of the church of God often do not dare to say that they are saved. They may say, “I hope I will be saved; I have a hope that I ultimately will be saved from sin, Satan, and myself.” Yet here it states they are saved. Our Confession views them as they are in Jesus Christ. It views them as they are in the great Shepherd who has shed His blood for them, who has bought them, and to whom they were given already in the stillness of eternity. Nothing can pluck them out of His hands. This is a statement of faith. That saving work has already begun, and that will be finished perfectly, which He for them has undertaken. This is then the holy congregation.

This fact also has consequences for our joining the church and for the position we take in regard to that church. For this holy congregation manifests itself in a visible form in its gatherings of worship, when assembled around Word and sacrament. We cannot separate those two. We may not say, “This is merely the visible church.” You cannot say, “I belong to the invisible church, and I have nothing to do with the visible church.” No, that is not what our fathers meant.

There is no salvation for those who are not under that Great Shepherd.

Our fathers believed that this was not what the Lord has taught us in His Word. In Article XXIX we will see that there are those who are in the church, but are not of the church. They are not part of it, but they are in it, as Calvin says, like kidney stones in the body; they do not belong to the body.

The Lord Jesus Himself allowed a Judas to be one of the twelve. He even allowed him to go out to speak; He allowed him to remain among His disciples for a long time. The Lord Jesus did not make the separation until Judas made himself public. In His parable, Jesus also spoke of the foolish and wise virgins as being one company. They all had lamps; they were all in the same way; they were all waiting for the same Person, for the Bridegroom. The only difference was that there was oil in the vessels of some, and the others had none. The Lord Jesus also spoke of a field with tares and wheat; they grew up together until the time of the harvest. He spoke of a net with fishes, good and bad fishes, and both were in the same net. It is very evident that there is no ground in Scripture for the idea that we must examine everyone who wants to become a member and require the evidences of God’s saving work.

Here in the world the church will remain a mixed company. In the tent of Abraham there was an Isaac and there was an Ishmael. Calvin compares this to the church. He says that Isaac and Ishmael were together, and both were of the same household, yet there was enmity between those two. They could not go together. The time came that Ishmael had to leave. Calvin says that this will happen at the last day, the day of God’s judgment, although sometimes the Lord causes the difference to be seen before. The hypocrite may also be revealed while he is still in this life.

So we believe that the church is a mixed company from which we may not withdraw ourselves. We may not live in a separate state from it. In times of decay and of much darkness in the church, some have thought that it would be better just to take an old writer and sit with a book in a corner at home, as they felt there was no Spirit and no ministry in the church anymore.

There have always been people who said that the Lord had departed from His church and that the Spirit was not there anymore. Sometimes they were not rebellious, but downcast, as Elijah was. He thought he was the only one left, but the Lord had yet seven thousand men who had not bowed unto Baal. Those people thought that the Lord had forsaken the church, and they preferred to stay at home. But the Lord says in Hebrews 10, “Not forsaking the assembling of ourselves together, as the manner of some is.” And He promised in Matthew 18:20, “Where two or three are gathered together in My Name, there am I in the midst of them.”

If we want to be wiser than God, wiser than what He says in His Word, we will bring darkness upon ourselves, even if we might have spiritual life. Do not forget that the Lord has promised, “Lo, I am with you,” that is, with His living church, “unto the end of the world.” You may say that the living church might perhaps be sitting at home. But, no, this is not according to God’s testimony. The Lord has commanded to administer the Lord’s Supper until He comes; and this sacrament may be administered only in a gathering of the church, in a worship service, and not at home by individuals. They withdraw themselves from the food and drink which the Lord still gives unto His church. In spite of all the imperfections, all the things we would like to change, and all the concerns about the visible church, also today, our fathers have said that we may not withdraw ourselves from that church to live in a separate state from it.

All men are in duty bound to join and unite themselves with this holy congregation. There is the duty to seek fellowship, to be longing for the means which the Lord still gives in His house. David expressed his longing for God’s house in Psalm 27:4. Also some of the children of God who had to stay at home longed for an opportunity to go to a place of worship. There were those who sometimes walked for hours and hours to hear the truth. They mourned when they were unable to go to the house of God. David knew of that, too. He says in Psalm 42, when he was on the other side of Jordan, “I pour out my soul in me: for I had gone with the multitude, I went with them to the house of God, with the voice of joy and praise.” One of the first fruits of spiritual life is not only a certain interest in, but also a longing to be under, the means of grace, and to join and unite oneself with it, maintaining the unity of the church.

Each word of this text has a wonderful, rich meaning. Let us begin with the word Savior, a word which is the marrow of the Christ - mas message. There is a Savior. There is...

Right at the beginning Paul places his finger on a very moving and tender spot: “Even when we were dead in sins.” That is a reality about which many no longer want to hear. Many wish to step over t...

The Communion of Saints (1)

Rev. J.J. Van Eckeveld, Zeist, the Netherlands Happily, because of God’s common goodness, there is still empathy for one another, but how eas...

Pastoral Guidance for the Administration of the Holy Supper

— continued — Those not attending Until now I have said something about the true frame of the little ones and also the established ones in faith. But the Holy...