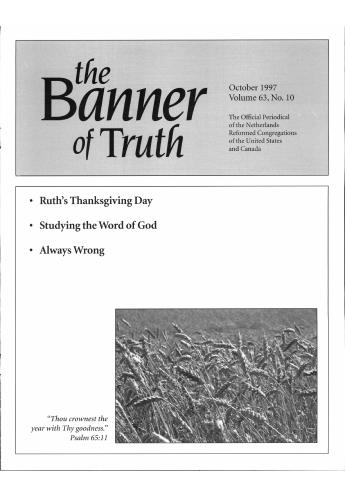 To avoid becoming too extensive, I will limit myself to a particular comment by Comrie in the book of Thomas Shepard, translated by him into the Dutch language, on the parable of the ten virgins. Shepard wrote:

“Consider He makes love to thee. Not one soul that hears me this day but the Lord Jesus is a suitor unto, that now ye would be espoused to Him; ‘He came unto His own, and they received Him not.’ Whatever the secret purpose of Christ is, I regard not.”

In connection with this statement Comrie makes this note: “This is the offer of the gospel, for although only the elect are saved, the offer of grace is nevertheless made to all who hear the Word. It is to be desired that one would hear this offer in every sermon; possibly then the sermons would be more effectual for poor, convicted souls. How it is to be lamented that it is heard only now and then, and that it is made conditional and wrapped in duties and requirements, so that instead of that poor sinners should come just as they are in response to the calling voice, they must remain away until they have found this or that required thing. Oh, how muddied the waters of the sanctuary often are! How few there are who open the way and call to a poor, miserable people, ‘Take the water of life freely.’”

Let us note carefully that no one less than our highly regarded Comrie expresses his disappointment that the offer is made “only now and then,” and that it is “made conditional.” How we should in our time make his complaint our own, “Oh, how muddied the waters of the sanctuary often are!”

[We end this series of articles by Rev. Vergunst with the concluding paragraphs of his extensive explanation of this subject.]

All too often the accusation is made against us that this doctrine which we advocate comes against the confession of man’s totally lost condition; or conflicts with the doctrine of limited atonement, opening the way for the teaching of universal atonement; or that it contains a denial of the one-sided work of the Holy Spirit, which brings the elect sinner from the state of spiritual death unto the state of true spiritual life. Such accusations are entirely without foundation. This doctrine does not open the way for even one of these errors.

Oh, certainly, a misuse may be made of this doctrine, but which doctrine has not been misused at some time during the course of years? If such misuse should cause us to be silent about scriptural truths, we would soon not be able to make mention of a single point of our biblical confession.

Included among the objections brought by many against the doctrine of the covenant, as it was worded in 1931 by the General Synod of the Netherlands Reformed Congregations [in the Netherlands] in agreement with the Holy Scriptures and in the footsteps of our old Reformed confessions, was also this — that in the light of these views the gospel preaching is assaulted. We increasingly hear this unfounded accusation. We do not claim that, in the midst of our congregations and wherever the Word of God is proclaimed, this preaching rightly brings forth the fullness of the biblical revelation. We would not dare to do this, for we know only too well that we also must always be reformed. However, the accusation that the doctrine sanctioned detracts from the gospel is a false accusation.

The question could be asked whether the same accusation applies to the Erskine brothers and to Thomas Boston. We dare to maintain freely that the doctrine of the Netherlands Reformed Congregations regarding the covenent does not differ from theirs. Did this doctrine detract from the gospel with these men? Seldom has the church of the Reformation encountered richer evangelical preaching than from them.

We can never preach Christ too great or too full

The accusation is not new. J. J. Brahe' [a Dutch minister, born in 1726 and died in 1776, whose works were highly regarded by Rev. G. H. Kersten] also extensively discussed it. Because of the great importance of his rebuttal, we will quote it in its entirety, so that we cannot be accused of quoting selectively or of taking certain expressions out of context.

This Reformed theologian wrote as follows:

“Finally, it may not be objected that the way is thus blocked for the preaching of the gospel to all who live under the administration of the same, and to make a general offer of salvation in Christ, without any respect of persons. I well know that some have scruples about this, but I find no reason to stand in doubt about it for one moment, since the content of our commission, recorded from Jesus’ own mouth, is, ‘Go ye into all the world, and preach the gospel to every creature.

“And to be brief about this matter, which should be indisputable among the orthodox, and is a truth which should be acknowledged and practiced by all who hold to the Canons of Dordt, I will only say that this truth is not against us, but for us. Because if we preach Christ and the promises of repentance and forgiveness of sins in His Name to all, even the greatest of sinners, and urge them all to believe in Him as such, we do not in this way tell all who hear us that Christ is the covenant Head for each of them, person by person, and that they must merely hold this for truth and rest upon it. Far from it! We preach to all a Christ who is necessary for them, and seek to bring the people to the acknowledgement of this through the discovery of their state of misery. We preach to all a Christ who alone is sufficient and suitable for us, even the greatest of sinners; yes, whose merits are in themselves so infinitely great that, if such were the divine decree, millions of worlds such as ours could have been redeemed and saved by them. We can never preach Christ too great or too full. Further, we preach a Christ who most willingly placed Himself in the breach for sinners under the curse and fulfilled all the required conditions of the covenant, rather than that there should be such a fury in Him that He would cast out any, even the greatest of sinners, who came to Him.”

It is an eternal wonder that God has provided a perfect Lamb for totally lost sinners. He is the only Remedy for incurable diseases, the precious Surety for those who deserve eternal death and have...

One day several years ago, the surveyor was working on our street, checking the property lines of vacant lots where new houses were to be built. I noticed that he was very careful about placing his...

What If I Am Not Elected?

Have you ever been plagued with this question Is it perhaps precisely when you are on your knees, begging the Lord to have mercy on you; when you are diligently using the means of grace; when in...

It is a great privilege to live under the preaching of the gospel. It is also a great responsibility. God's wrath abides upon those who are disobedient to the gospel. However, true faith flees to J...

The Offer of Grace: Biblical Grounds

We believe with all orthodox theologians that in the preaching of the Gospel there is a general, sincere, unconditional offer of grace. We m...

Uitgave: The Sincere Offer of Christ and the Covenant Benefits in the Gospel