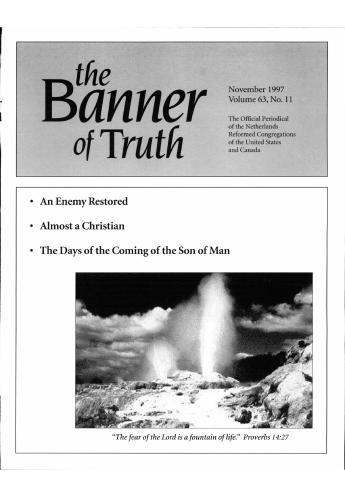 Parable of the Prodigal Son (8)

“But the father said to his servants, Bring forth the best robe, and put it on him; and put a ring on his hand, and shoes on his feet” (Luke 15:22).

“But the father said.” The word “but” is just a small word, but it has a very great significance. This word ties the confession of the prodigal son together with the gifts of the father. Last month we saw the prodigal son saying, “Father, I have sinned.” And yet there was a place for him in his father’s house because of that onesided work of God.

For here in the Word of God we see the word “but.” After the prodigal son had confessed his sins, the father didn’t say, “I cannot accept you.” He didn’t shake his head, saying, “No, I cannot accept you because of the way you left home and trampled upon my fatherly heart. You have desecrated this your parental home. I’m happy with your confession, but our relationship can never be restored anymore because of all that has taken place.” No, the father didn’t say that, for after the confession, the Word of God says, “But.”

The prodigal son stood there, feeling that his father would be right if he had nothing to do with him anymore. He felt that his father would be just in sending him away forever. But the gift is for such a one who stands there in his rags and as an undone sinner. What does he need most? He needs a new covering. The prodigal son couldn’t go into his father’s house with his rags. He couldn’t walk among the father’s children in those rags which smelled of the far country, where he had been with the hogs. He needed a new covering, a new garment. What is the new garment in the life of a child of God? It is the Lord Jesus Christ, and His blood applied unto his heart. That is what the sinner needs more than anything else.

Do you notice something here? The father didn’t send a new garment to him in the far country. He brought his son OUT of that far country, all the way back to the father’s house. The father did not send the robe, the ring, or the shoes to that poor boy in that far country, but he gave them to him when he came home. This speaks of a sinner who is brought unto Jesus Christ. It speaks of a sinner who comes and is brought before the holy justice of the Father, and who comes to need Jesus Christ as a Savior. I cannot express enough to you the necessity of knowing this in our own personal life. We see this as a point of doctrine: a rich Christ and a poor sinner.

The father gave those presents to the prodigal son. He embraced him in those presents because he was his child. He said, “Bring the best robe.” He called one of his servants to bring it. I can almost see the servant coming and carrying it reverently. The robe had been hanging there, waiting for the son. The servant didn’t get the robe out of the slave quarters or from the barn. No, the robe was hanging in the father’s house.

We then see that the father had the robe put upon the prodigal son’s shoulders. He was covered again. He was so covered that his father then saw him as his beloved child, as he had always seen him. He was covered with a robe of righteousness. He saw him as God sees His people, clothed with Jesus Christ. That is where the Lord brings His people.

When Christian in Pilgrim’s Progress saw certain persons walking, who were clothed all in gold, he said unto Interpreter, “May we not go in thither?” However, it was not yet the time, even though he was on the way. He still had to come to the cross. One day, all of God’s children will be there, in heaven, clothed in those robes which are ready in the Father’s house. They will be clothed with those robes which are washed in the blood of Jesus Christ.

What else did he receive? The father said, “Put a ring on his hand.” Do you know what that means? It means that he had the assurance he was a child of the father. The ring testified that the father had given him the robe. It also testified that the father had opened the doors of his house. It showed that he belonged to his father as a son, and not as a hired servant or slave. “Put a ring on his hand.” We find this assurance in Romans 8:16, “The Spirit itself beareth witness with our spirit, that we are the children of God.”

“And shoes on his feet.” He did not have to walk barefoot into his father’s house. Putting shoes on his feet signified the ability given to him to walk into his father’s house. These were shoes in which he may walk in the freedom of his father. And now for the child of God, the shoes represent the freedom in which he may walk. He is free from the bonds of death, free from the bonds of hell and eternal condemnation, free because the Father has set him free.

Dear traveler to an all-decisive eternity, have you cried in the darkest corner of your house, “O Lord, wilt Thou be merciful unto me”? Children of the Lord, were you privileged to follow along with me? Can you go this far: “Father, I have sinned”? Do you know something of the best Robe, Jesus Christ? Does the blood of Jesus cover your sins? Do you feel the ring on your hand, that testimony that He belongs unto you? Do you have shoes on your feet, walking in the freedom with which the Father has made you free?

Parable of the Prodigal Son (4)

Last month we saw the prodigal son at the swine trough, kneeling among the swine and seeking to fill his stomach with their food. However, we see a turning in his life. We must say that it was not...

The Parable of the Prodigal Son (1)

Luke 15:11-12 In the coming months we hope to focus our attention on the well-known parable of the prodigal son. We will be showing you a sinner leavi...

Parable of the Prodigal Son (12)

“Oh, servant, what a father we have. He is a father whom one would not find anywhere else. This loving father took my brother into the house, and I’m the same as my brother, such a waster of his go...

Parable of the Prodigal Son (9)

“And bring hither the fatted calf, and kill it; and let us eat, and be merry.” With these words we can take a glance into the heart of this father. The father had love for his child who stood befor...

Uitgave: Parable of the Prodigal Son (8)