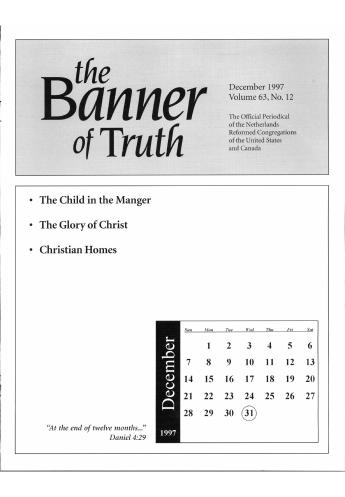 The wind was blowing hard, and the rain came down heavily, making everything dark and gloomy. James and Lisa sat close to the stove. Ah! That was nice and warm! When they had come home half an hour ago, they had been so cold! It was still early, but Mother had lit the lamp already because she could hardly see what she was cooking.

The door opened again, and a cold gust of air burst into the kitchen. Father came in. He closed the door right away.

With a heavy sigh he sat down. “Mother —” he said.

Mother looked up, a little alarmed.

Father looked at the two children. “You are old enough now to understand what I am going to say,” he said. “I heard rumors in the village that the Pope has excommunicated all of us, all of our people, the Waldenses.”

The children saw their mother put her hand over her mouth. James looked questioningly at his father.

“That will not bother us too much, will it, Dad? We do not believe that the Pope is the head of the church.”

Father nodded. “Yes, James, that is true, but don’t forget that most of the people still believe that he is the head of the church and that they have to obey him. And that means that everyone who wants to kill us or wants to steal from us can do so with the Pope’s permission.”

James looked at his father. His voice sounded a little bitter. “We will not let them come here,” he said fiercely.

His father shook his head, and he looked at his wife with sadness in his eyes.

“We have to be honest with each other,” he said. “We cannot do very much. I also heard this afternoon that groups of soldiers were sent to some villages not too far from here. The people had a choice: they had to burn their Bibles and go to the Roman Catholic church again, or — ”

James and Lisa listened with big, frightened eyes. What happened? “A lot of people were killed.” Father’s voice sounded very sad. “And they took the children away and brought them to monasteries.”

“The Lord will take care of us,” Mother said, and she stroked Lisa’s head.

“Our neighbors are already leaving,” Father answered, and he looked at her. He sighed and said to James. “And the parents of Peter, your friend, and their neighbors, they are all leaving. They do not want to take a chance, for they expect the soldiers to come here, too.”

Mother looked around in her kitchen. Leave? Her house, most of the furniture — could she do that? Yes, but, there was something else. In the corner of their bedroom stood a little cradle. In a few months she expected a new baby. Could she move now? Was that the Lord’s will?

Father seemed to know what she was thinking. He took her hand. “The Lord will take care of you,” he said. “I think we will have to leave, too. It will not be easy, and the weather is not so good either, but the danger is coming close. In a few days those soldiers could be here. Think of it. We may not be reckless.”

James and Lisa looked at each other. Move? That would be quite an adventure. Their friends were going, too, so that would not be so bad.

They heard Father explain to Mother where they were planning to go. Many Waldenses wanted to move to the mountains in Switzerland. Behind those high mountain ranges with the ice and snow were beautiful valleys, they said. They wanted to live there. The soldiers could not come there. Then they could again read the Bible as much as they wanted and worship the Lord as it was written in His Word.

Everything sounded so nice. Was it true? Would they be safe there?

James shivered as he listened to the roaring wind outside. What if the soldiers would come to their house? What if they would tell them to burn their booklets from the Bible? Oh, no! Mother and Father would never do that! They loved those books so much!

James and Lisa couldn’t sleep that night. They whispered to each other in the dark. When would they move? What could they take along?

“I hope Mother takes the cradle along,” Lisa thought. The new baby would need a little bed in the mountains, too.

On a lonely country road a wagon with two horses moved steadily onward. The cart was loaded with all kinds of furniture, with beds and with many crates. Two cows were tied to the back of the wagon.

“We will see if we can take them along,” Father had said. “If not, we will just have to let them loose.”

Mother was sitting in the front, on top of some of the crates. She could not walk very far. Father, Lisa, and James walked beside the cart. Once in a while Father put Lisa next to Mother. “Otherwise you will get too tired, and then we will have to stop,” he said.

James did not want to go in the wagon. He could walk as his father did. He was old enough.

Was it only two days ago that they had talked about moving? Now they were already on their way to the Alps, the mountains in Switzerland.

They had had to leave so much behind: their house, a large part of their furniture, and most of their cattle. It had been difficult and sad.

Lisa looked at her mother, who did not look sad at all.

Lisa had heard what Mother had said to Father when they had to leave and Father was still wandering around the house: “To serve the Lord freely has more value than all these things. Let’s go.”

Lisa had seen that she had put the cradle and a box with little baby things close to her under the crates. Oh, yes. When the baby would come, everything would be there that it needed. And when they were across the mountains, then they did not have to be afraid of those soldiers anymore!

It was a long ride. Father took all back roads. He was afraid of meeting soldiers.

That night they camped in a dark forest, among some large trees. It was cold, but Father did not dare to make a fire. They had a cold supper, and afterwards Father made a little tent for them to sleep in. That was strange. They would never be able to fall asleep here! Listen to all those strange sounds: the wind moaning softly through the branches, the leaves whispering, a branch snapping. Was somebody coming? An owl hooted.

But, oh, they were so tired. Before they knew it, they had drifted off and were sound asleep.

Spring! James went outside and sniffed the air. It had a promising smell. It was so fresh and crisp!He looked at the high mountain tops around the valley. He was always in awe when he saw th...

Lisa and James laughed. Oh, those two silly lambs! They had to feed them with a bottle because they could not drink from their mother. But they squirmed, and then the milk ran over their noses inst...

A New Bishop for Milan “May I go to church too, Mom ”Maria’s mother hesitated and looked at her husband. They were used to taking Maria along to the church s...

Along a small, winding mountain path people were walking in a long row. The women held the little children by their hands and carried the babies. The boys and girls also had their portions to carry...

Elwa, a Girl in a Germanic Village (4)

It was very quiet in the woods. Elwa looked around. Nearly all the people of the village had come. She was so glad she could be here, too! At first her father did not want her to go. He hated those...