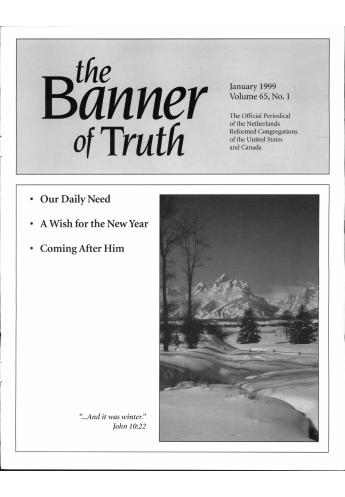 “Jesus answered and said unto him, Before that Philip called thee, when thou wast under the fig tree, I saw thee” (John 1:48b).

“Can there any good thing come out of Nazareth?” That was the answer of Nathanael when Philip called to him, “We have found Him, of whom Moses in the law, and the prophets, did write, Jesus of Nazareth, the son of Joseph.”

For Nazareth was in all aspects a despised place. How could Philip then be so glad with that Man from Nazareth? A prophet had never come forth from there, and nothing there could bring to mind anything of the royal glory of the Messiah who was to come.

However, God's thoughts about Nazareth were different and higher than the thoughts of Nathanael. From that despised Nazareth would at this time come forth not only something good, but even the Most High and Eternal Good. For Jesus, as the great Shepherd, has come to seek and to save that which was lost.

Philip himself was so filled with what he might see in Christ, that he only replied, “Come and see.” Thus Philip prayerfully brought his friend Nathanael to Jesus. It was in this way that Philip came. It is said that Philip findeth Nathanael. But Jesus drew him with cords of His eternal love. At the feet of Jesus he would be healed of all doubt and unbelief.

When Nathanael came to Jesus, the Lord said of him, “Behold an Israelite indeed, in whom is no guile!” Would Nathanael himself have thought this? No, for if you had asked him what he thought of himself, he would have answered, “My conscience accuses me that I have grossly transgressed all the commandments of God, and kept none of them, and am still inclined to all evil.” No, he would then have said, “I have never done good, I have never been upright, for I was shapen in iniquity and conceived in sin. I can do nothing other than daily increase my guilt.”

He was not able to say anything, but in amazement to ask, “Whence knowest Thou me?” The same amazement lies in the question which Ruth asked of Boaz, “Why hast thou taken knowledge of me, seeing I am a stranger?” “The Lord knoweth them that are His” (2 Timothy 2:19).

He also knew Nathanael already from eternity. For now the Lord said to him, “Before that Philip called thee, when thou wast under the fig tree, I saw thee.” The Lord saw Nathanael when he sought a solitary place under the fïg tree. That was a special sign, which could not be understood by anyone other than Nathanael himself. The fïg tree has large leaves, which hang even to the ground. It is a tree similar to our weeping willow. And in connection with the text, we can know that he had there withdrawn from the world to be alone with the Lord, to wrestle in prayer with God.

There is still such a people, who know of a secluded place of prayer, where they bring their lamentations before the Lord. It is a place where, in the midst of all anguish and anxious fears, they may at times be so wonderfully comforted and supported. They understand what the poet sang, “Lord, hear me while I pray, while now in trouble's day I seek Thy face.” For one this may be a fig tree, for another an inner chamber; for a farmer it can be a stable or barn; and it can also be an hour in the darkness of night.

David also knew of this when he sang, “When on my bed I rest at night and meditate on Thee.” Oh, how an anxious heart can cry out unto God, being so unspeakably poor and wretched; indeed, at times as one forsaken by God. He is convinced by God's Spirit of his lost condition and his guilt, and he is so bitterly grieved because of the God dishonoring character of sin against a good-doing God.

For he might experience that his wrestlings in prayer there in that place of solitude were heard by God.

On one hand, such people feel such a crying need, such a poverty, and such a grief because of missing God, that they can find no words to lament their distress. They say with David, “As the hart panteth after the water brooks, so panteth my soul after Thee, O God.” However, they know also of the drawing power of an inexplicable love to the Lord.

The world has become death to them, and they do not dare to include themselves with God's children. They cannot explain themselves, and yet they are not always uncomforted, for at times they are explained. But their hearts remain filled with riddles as to how they will ever be reconciled with God. Therefore their thirst increases, and their hunger after the salvation which is in Christ Jesus becomes ever greater. Thus they seek secluded places, in order to run after Him, to cry after Him, and to weep after Him.

The Lord then said to Nathanael, “It is from thence that I know you.” No, with this word Nathanael did not feel discovered and detected, but he was amazed and at the same time wonderfully comforted and strengthened. For he might experience that his wrestlings in prayer there in that place of solitude were heard by God. Then, by the enlightening work of God's Spirit, he cried out regarding Jesus, “Rabbi, Thou art the Son of God; Thou art the King of Israel.”

“I knew thee when thou wast under the fig tree.” Do you also have such a fig tree? Do you also know of such a secluded place? Young people, such a place must also be known by you in your young life: a place in the attic, or perhaps in your bedroom, a place where no one sees you but the Lord alone. Or do you no longer have time for this? Do you have time today or tomorrow or later to die and to give an account of yourself before God? Oh, how poor the world is, with everything which it has and which it gives!

It can be that it happens that you think that God's eye is not upon you, and you then must complain, “My ways are hid from the Lord, and my cause is passed by of my God.” However, one day your sorrow will be turned into gladness when you may with Nathanael see the King in His beauty, for the Lord looks in favor upon those who wait for His mercy with trembling hearts.

The Great, the Greater, the Greatest Things for the Church of Christ 1. Great Things. Nathanael belonged to the circle of friends in...

Jesus Goes to Jerusalem (Based on Matthew 21)

The time was now very near when Jesus must die, and He went to Jerusalem which was the place where He was to suffer. Was He afraid to go there No, He wanted to go there. This was the reason He ha...

The Lord is the Searcher of the heart and the Trier of the reins (Jeremiah 17:10). He knows all His sheep by name. He also knows the sincere desires of those who are His. He knows that His converte...

The Blessing of Knowing an Inner Closet

When the Lord Jesus speaks about prayer in Matthew 6:6a, He begins with the words, "But thou." With these words He desires to direct attention to the previous verse. In this verse, He speaks of a c...

We have seen the ship sailing onward, away from Jonah. The sea became very calm as Jonah went overboard. That is where we left him, going deeper and deeper towards the bottom of the sea. There was...