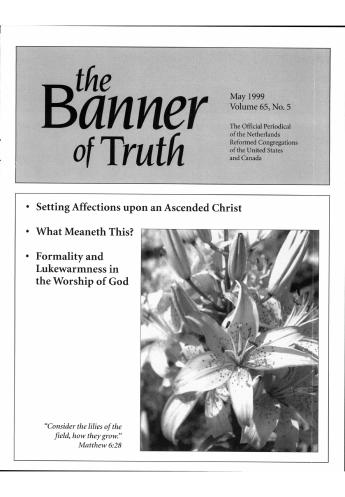 Formality and Lukewarmness in the Worship of God

The following is taken from the book, God's Terrible Voice in the City, written by Thomas Vincent and originally published in 1667. This book was reviewed in our publication in December 1998. London had experienced a severe plague in 1665, during which 68,000 died, a year later London suffered the Great Fire, which consumed an extensive part of the city. God's voice continues to be heard in events of all kinds, and therefore the book is still relevant today. The book was published by Soli Deo Gloria Publications and is available from Bible Truth Books.

The fourth sin of London is formality and lukewarmness in the worship of God. There was much formality when there was no form; and I suppose that forms have not quickened unto more loveliness. There was a face of worship indeed in London; and was there only, or little more, than a face in most places? God is holy and jealous, “a Great King, and His Name is dreadful” (Malachi 1:14).

“God is a Spirit: and they that worship Him must worship Him in spirit and in truth” (John 4:24). But has His worship been accordingly in London? Has there been that spiritual worship which He requires? Let London seriously reflect upon their carriage towards God in their devotions. Have they had a due awe and dread of the great Name of God upon them, when they have seemed to draw near unto Him? Have they worshipped Him with reverence and godly fear?

Outward reverence some have used, more than He hath required, in bowing at names and before places; but have they had inward reverence and fear of God upon their hearts? Have they clothed themselves with humility when they have come into His presence? Has there been inward fervor and delight accompanying their outward acts of worship?

Alas! how formal has London been, especially of late in God's worship. They have prayed, but what kinds of prayers have they been? Could they deserve the name of prayers? Were those prayers likely to prevent judgment, or turn away wrath? Some confessions of sin have been made, but so general and formal that they have been very unlikely to work up the heart to sorrow and repentance; and where some have been more particular, has not much formality cleaved to them?

Where has hearty grief for sin and sorrow been to be found? Would not a small vial hold all the tears that have dropped from the eyes of great assemblies, even in the day of their solemn humiliations? Has not sin been rolled under the tongue when confession of sin has been at the end of it? Have not the confessions of many been such, as if they came to ask leave to commit sin, rather than humbly to bewail it? At least, have they not taken leave, whatever their confessions have been?

Petitions have been made for pardon, and grace, and sanctification, but has it not been lip-prayer, without hearty desire? Has it not been in such a manner, as if they did not much care whether they did speed or no, as if they could make shift well enough without a pardon, as if they had no need of grace and holiness: but they must say something for form and custom.

Has there not been an enmity in the hearts of many against that which they have seemed to desire with their lips? Who have stirred up themselves to lay hold on God? Who have wrestled in prayer, with fervent desires, with faith, and importunity? Hearing there has been in London, but how little believing; how little relishing the Word, and receiving it with love! Singing there has been, but how little joy and melody of the heart in the Lord.

Oh, how formal and lukewarm have Londoners been; how much of the Laodicean temper have they had in all ordinances! And might not God say to London, as He did of old to Jerusalem, “To what purpose is the multitude of your sacrifices unto Me?” etc. (Isaiah 1:11-14). Such services are to no purpose; they are vain worship, and do not attain the end thereof, either to profit him that offers Him them, or to please Him unto whom they are tendered. Can such formal services be effectual to procure pardon or peace? Can they bear up the spirit in a day of trouble? Will not the morning cloud and early dew of such righteousness flee away and vanish upon the approach of the sun? Will not such spiders' webs be broken to pieces by a stormy wind?

How do formalists behave themselves, as if they had no religion, when they fail into troubles! When God thunders by His judgments, what can a cold, formal, empty prayer do? When Death appears before them with a grim countenance, what comfort can such reap by reflection on such services? What evidences for heaven can they gather from any of their outside devotions?

And are not they to as little purpose in regard of God? May not God say unto them of their fastings and prayers, “Did you fast unto Me? Did you pray at all unto Me?” (Zechariah 7:5). Or, as here to the Jews, that He was full of their services, even to a loathing; that He took no delight in them; and “who hath required these things at your hands, to tread My courts? Bring no more vain oblations; incense is an abomination unto Me; I cannot away with your assemblies, My soul hateth them; they are a trouble to Me, I am weary to bear them.”

The Lord is much offended with formal, hypocritical services; hereby they flatter and mock Him, and is He taken with flatteries? Such services are like a dead, cold, black, mangled, rotten, stinking carcass, without the soul and spirit, which must needs be very unsavory and displeasing. They are like the lame, blind, halt, sick cattle, which were not fit to be offered up in sacrifice under the law. “If ye offer the blind for sacrifice, is it not evil? and if ye offer the lame and sick, is it not evil? offer it now unto thy governor; will he be pleased with thee?” (Malachi 1:8). And will God then be pleased?

And oh, how abominable is all such worship in the sight of God! Has not formality in worship been one sin of London which has helped to fill up the Ephah? When the means God has appointed for the turning away of His anger are used in such a manner that itself becomes a provocation, no wonder if His wrath breaks forth without remedy.

How highly we are privileged in that we have the Most High God revealed to us, who is a God that heareth prayer. The greater part of mankind are destitute of this privilege; they are ignorant of th...

How wonderful the dealings of the Lord were in the life of Mephibosheth. Oh, when he thought of King David, how much fear lived in his heart. This all came to pass when the servants of the king cam...

How Shall We Escape?

When we read this passage, then it seems as if the apostle Paul is overwhelmed with two things, namely, the great and wonderful salvation of God and the awesome responsibility of man. How lightly w...

Uitgave: Formality and Lukewarmness in the Worship of God