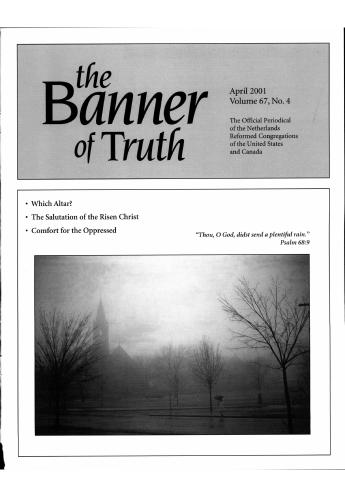 Recently I spoke to a few young people in one of our congregations. They wondered whether or not we teach that something special needs to happen to us in order to be converted. Some of them were confused by those who had accused the Netherlands Reformed Congregations of thinking that God's Word is not enough for salvation and of saying that people are in need of a special revelation from God.

Is this true? Have we and our fathers said that we are in need of something special? In one way, yes; and in another, no. We need the application of the Spirit to bring the Word into our hearts. Is that not special? It is a most wonderful and necessary work to enlighten our minds and to change our hearts. Yes, we say we need a special application of the Word of God. But we have never said, and we are opposed to saying, that we need a peculiar revelation of God independent of the Word. We oppose building our salvation on dreams and visions. Our forefathers were very cautious regarding this matter. Rev Kersten said that he believed that ninety-nine of one hundred dreams were not of God. Others have expressed themselves even more boldly.

The problem with dreams and other "revelations" is that God apparently reveals Himself more clearly than He does in His Word. Is God's Word not sufficient, then? Do we need to write down the dreams and visions and add them to the Word of God? What about Satan? Can he not deceive us? Let us also remember that our mind is quite powerful and can produce revelations itself as a result of fear or wishful thinking. Especially in spiritually poor days, something like a dream or vision might look very pious, but the Lord reveals Himself differently. May it please the Lord to make His Word powerful and irresistible.

But I have said enough. Let the reader ponder what our fathers said in the Canons of Dordt, Head 5, Article 10:

This assurance, however, is not produced by any peculiar revelation contrary to, or independent of the Word of God; but springs from faith in God's promises, which He has most abundantly revealed in His Word for our comfort; from the testimony of the Holy Spirit, witnessing with our spirit, that we are children and heirs of God, Romans 8:16; and lastly, from a serious and holy desire to preserve a good conscience, and to perform good works. And if the elect of God were deprived of this solid comfort, that they shall finally obtain the victory, and of this infallible pledge or earnest of eternal glory, they would be of all men the most miserable.

And here is what Jonathan Edwards said on this matter:

The extraordinary impressions which are made on the imaginations of some persons, in visions, and immediate strong impulses and suggestions, as though they saw sights, and had words spoken to them, may, and often do, beget a strong persuasion of the truth of invisible things. Though the general tendency of such things, in their final issue, is to draw men off from the Word of God, and to cause them to reject the gospel, and to establish unbelief and atheism; yet for the present, they may, and often do, beget a confident persuasion of the truth of some things that are revealed in the Scriptures; however, their confidence is founded in delusion, and so nothing worth. As for instance, if a person has by some invisible agent immediately and strongly impressed on his imagination the appearance of a bright light and glorious form of a person seated on a throne, with great external majesty and beauty, uttering some remarkable words with great force and energy; the person who is the subject of such an operation, may be from hence confident that there are invisible agents, spiritual beings, from what he has experienced, knowing that he had no hand himself in this extraordinary effect, which he has experienced. He may also be confident that this is Christ whom he saw and heard speaking; and this may make him confident that there is a Christ, and that Christ reigns on a throne in heaven, as he saw Him; and may be confident that the words which he heard Him speak are true, etc, in the same manner as the lying miracles of the papists may for the present beget in the minds of the ignorant, deluded people a strong persuasion of the truth of many things declared in the New Testament. Thus when the images of Christ in popish churches are, on some extraordinary occasions, made by priestcraft to appear to the people as if they wept, and shed fresh blood, and moved, and uttered such and such words; the people may be verily persuaded that it is a miracle wrought by Christ Himself; and from thence may be confident there is a Christ, and that what they are told of His death and sufferings, resurrection and ascension, and present government of the world, is true, for they may look upon this miracle as a certain evidence of all these things, and a kind of ocular demonstration of them. This may be the influence of these lying wonders for the present; though the general tendency of them is not to convince that Jesus Christ is come in the flesh, but finally to promote atheism. Even the intercourse which Satan has with witches, and their often experiencing his immediate power, has a tendency to convince them of the truth of some of the doctrines of religion; as particularly the reality of an invisible world, or world of spirits, contrary to the doctrine of the Sadducees. The general tendency of Satan's influences is delusion; but yet he may mix some truth with his lies, that his lies may not be so easily discovered.

This concludes the quote from Edwards. After these four introductions to his book, Religious Affections, we hope you will read the book for yourself. It is good to take under consideration his thoughts as to what people feel in their hearts. May the Lord give light upon our personal pathways, separating the "precious from the vile." We may also hope that God's children may be confirmed in what the Lord has so graciously wrought in them, bringing them as guilty sinners at Christ's feet.

The Lord is faithful to His promises. Not one of those who is given unto Christ by the Father and whom He bought with His precious blood will perish. The pilgrims will arrive safely in the desired...

Setting Affections upon an Ascended Christ

The resurrection of Christ is a very significant event. It is indispensable in the life of the true church. Paul says, “If Christ be not risen, then is our preaching vain, and your faith is also va...

Instruction for Young and Old

Rev. C. Sonnevelt, Lethbridge, AB It is a simple word that demands our attention, but it is full of instruction for young and old. May we tak...

How Can We Know God’s Will?

It is well for those who are duly sensible of their own weakness and fallibility, and of the difficulties with which they are surrounded in life, that the Lord has promised to guide His people with...

Christ and the Children

The Lord by the means of Moses gives a solemn warning unto parents. Parents have to teach their children the ordinances of the Lord who has shown them so many signs and wonders and led them out of...

Uitgave: A Taste of Edwards (4)