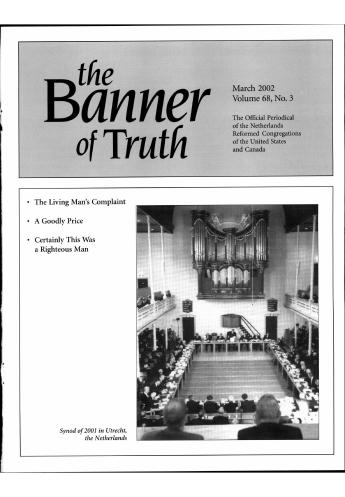 Saturday, January 26, 2002, was a very special day for the Gereformeerde Gemeenten in the Netherlands. On that day many ministers, students, consistories, and members (both full and baptized) came together in the old and significant church building located on the Boezemsingel in the city of Rotterdam. This was the historical place where seventy-five years ago the late Rev. H. Kievit spoke an opening word on the occasion of the beginning of the Theological School. However, before this solemn moment had arrived, much work had been done by a number of persons, but especially by the then young Rev. G. H. Kersten.

Now, on this day of commemoration, the assembly was opened by the emeritus minister, Rev. A. F. Honkoop. He requested the singing of Psalm 118:1, read Acts 5:29-42, and led in prayer. He then spoke briefly about the portion of Scripture which was read and its comparison with the circumstances of our school. The establishment of the Theological School seventy-five years ago was not with the desire to become something as a denomination, because then it would have been the work of men. No, our esteemed former ministers had a much better motivation. They increasingly felt the great need for ministers who in the first place were called by the Lord and set apart to serve their own congregation and the many vacant congregations. Compelled by the deplorable situation in other churches, they came, with God's blessing, to commence the official instruction of our first students.

Today we may all be witnesses that God's protecting hand has been over us. Although the school has often gone through difficult ways, disappointments, and trials, the work which is of God cannot be broken. It is only because of His faithfulness that the school still exists. Trust in the Lord will never be put to shame. Rev. Honkoop concluded with some personal information regarding his work in the Curatorium, of which he had, until recently, been a member since 1963, serving as chairman for most of those years. Rev. J. van Eckeveld has now replaced him in this position.

The next speaker was Rev. M. Golverdingen, who gave an outline of the years prior to the realization of the Theological School. He traced the line from Rev. L. G. C. Ledeboer, Rev. P. van Dijke (father of our Rev. A. van Dijke), and Rev. E. Fransen until the time that the ministers and elders, as delegates to the ecclesiastical meetings, were more and more convinced of the need of a theological school of our own.

Rev. A. Moerkerken then reviewed the seventy-five years of events regarding the school itself. He spoke briefly about the characteristics of the instructors of the school, including some anecdotes of them and of some of the students. He also mentioned the very difficult and sad years of 1951-1953, in which a conflict took place.

Following Rev. Moerkerken, three ministers had been requested to give an impression of their period of study at the school. Because the oldest serving minister, Rev. P. Blok, was sick, he was unable to be present. The three ministers were therefore Rev. A. den Boer, Rev. J. van Eckeveld, and Rev. C. Neele.

Rev. G. J. van Aalst, who is one of the present instructors, then presented a book entitled Ontboezemingen, which was written for this occasion and contains the history of the Theological School. The title signifies an effusion, an outpouring, an unbosoming of one's self. This book, illustrated with many pictures, is available (see end of article).

Next we were given the opportunity to bring the message of congratulations from our congregations, our Curatorium, and our theological school in North America, at which time we also presented a plaque and a monetary gift to the school. Rev. J. van Eckeveld accepted these gifts, and expressed hearty thanks to our congregations. Rev. A. Schot then gave a gift which had been collected and donated by the congregations in the Netherlands, and to this was added approximately $6,000 taken up as the collection that day. These funds will be used for the renewing of the furniture in the rooms of the school.

In closing this part of the day, Rev. L. Blok, also one of the instructors, requested the singing of Psalm 22:16 in the metrical version of P. Datheen (1563), which, translated, reads:

From them shall always some come forth

To teach Thy Word to succeeding generations,

And to greatly praise Thy great goodness,

Conferred by Thy most gracious hand.

A lunch was served for ministers and students and their wives in an adjoining room, at which Rev. R. Boogaard, an emeritus minister, closed with prayer.

We had an opportunity to speak with many of those present, and it was encouraging for the Curatorium to see the extensive interest shown that day, also by young people of the congregations. Additional chairs and tables were needed to provide seating for those present. Many testimonies of appreciation had already been given, but it was evident that, in spite of our sins and unworthiness, the love of the Lord was among us.

The plaque from our congregations will be placed on a wall in the room in which the Curatorium meets. A picture of all the ministers present was taken by the Reformatorisch Dagblad, the daily newspaper of the Netherlands for the Reformed population; this photograph is shown above. May it please the Lord to prolong the bond of correspondence between the churches of the Netherlands and North America, and may that bond of love be experienced in accordance with the ninth article of our Confession of Faith, “I believe an holy catholic church; the communion of saints.”

(Presented With (Brotherly Salutations And Congratulations To The Curatorium And Theological School Of The Gereformeerde Gemeenten On The Occasion Of Their 75th Anniversary Commemoration By The Netherlands Reformed Congregations Of North America,

CHURCH NEWS MINISTERIAL CALLS Extended: To Rev. A. H. Verhoef of St. Catharines, Ontario, by the congregations of Sheboygan a...

Calls Extended: To Rev. D. Hakkenberg, of Lisse, the Netherlands, by the Corsica, South Dakota, Congregation.To Rev. A Moerkerken, of Nieuw-Beijerland, the...

The Lord willing, August 28 will be the day that Rev. Lamain will have the privilege to commemorate the 50th anniversary of his ordination as a minister by the late Rev. G.H. Kersten in his first c...

Calls Accepted; To the Kalamazoo, Michigan, Congregation, by Rev. A. Vergunst, of Veen, the Netherlands. REV. J. C. WESTSTRATE...

Uitgave: Seventy-Fifth Anniversary Commemoration of the Theological School of the Gereformeerde Gemeenten