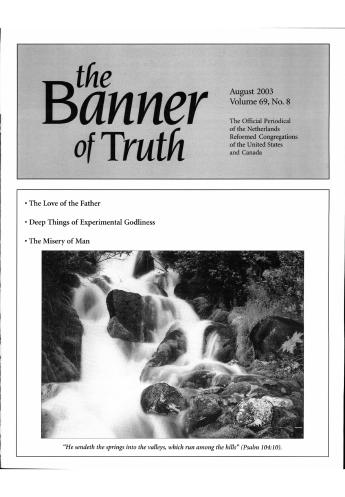 It is a great comfort for God's church that the Lord has chosen them before the foundation of the world, and that everything is prepared for them. This doctrine is no stumbling block to them, but it should not be to you either, because if there would be no election, there also would be no preaching of the gospel, in which you are sincerely called and invited to salvation.

We are responsible for what we do with God's revealed will. This will is that we would turn from our evil ways unto Him.

No, God's children were not better. They also were enemies of grace, but by His irresistible grace, God prevailed in their life and brought them to His feet.

The cause of their gracious election is not in any work of man, not in their foreseen faith and obedience of faith, their holiness, or any other good quality. No, God has not chosen them for any reason in themselves.

This we also read in Article 9:

This election was not founded on foreseen faith, and the obedience of faith, holiness, or any other good quality or disposition in man, as the prerequisite, cause, or condition on which it depended; but men are chosen to faith and to the obedience of faith, holiness, etc.; therefore election is the fountain of every saving good, from which proceed faith, holiness, and the other gifts of salvation, and finally eternal life itself, as its fruits and effects, according to that of the apostle: “He hath chosen us [not because we were but] that we should be holy, and without blame, before Him in love” (Ephesians 1:4).

The doctrine of election teaches us so clearly that in man there is no reason to boast. It is the proud nature of man that objects to and resists this doctrine. Man wants to seek the ground of his salvation in his own work. Only by grace will we understand that God has laid His sovereign election as a foundation and for that reason alone will there be fruits of repentance and faith. For poor sinners this is a comfort because nothing is required of man as a condition for their election. There is no need for foreseen faith or obedience of faith.

The error of the Remonstrants

The Remonstrants believed that God made conditions for election. They say that God could have made many conditions, but He selected only faith and obedience as requirements. Man has to fulfill these conditions himself, they say, even if very imperfectly. God would then accept the imperfect act of faith and obedience as if it were complete, and He would graciously reward it with eternal life. In the reasoning of the Remonstrants man should use the light of nature rightly, and then he should believe and obey. Then God would graciously accept this as being sufficient for salvation.

However, it is not hard to understand that in such a teaching nothing is left of the scriptural doctrine of election. We may then speak of grace, but actually it is not grace, but work, and election then depends on the good qualities of man. If this were true, it would be completely hopeless for God's church. For they will learn thoroughly that they cannot do anything but sin and spoil everything, and that of themselves they miss that true faith and those good works. It is a God-dishonoring doctrine because it is man who decides for his salvation and gets the credit for it; the honor is not given to God.

True faith is a gift

Scripture tells us something different. We read in Ephesians 2:8, “For by grace are ye saved through faith; and that not of yourselves: it is the gift of God.” This faith is absolutely necessary. We read in John 3:36, “He that believeth on the Son hath everlasting life: and he that believeth not the Son shall not see life; but the wrath of God abideth on him.”

This faith is not found in us anymore. We lie in a state of unbelief. If the Lord had to wait for our faith, it would never be found. But the teaching of Scripture is that God, who has chosen sinners only for His good pleasure's sake, looks upon them in His electing love and grants that faith at His time and in His way by His Word and Spirit.

No, election does not rest upon the foundation of faith, but faith rests on the foundation of election. We read so clearly in Romans 9 that God is the great Potter. He has the power over the clay, of the same lump to make one vessel unto honor and another unto dishonor. It is not that the one lump of clay is more qualified than the other. It is only God who makes a difference where there is no difference. It is only by grace that we indeed may become clay in the hand of the great Potter, that He may do with us whatsoever pleaseth Him.

We should not seek the Remonstrants too far away, however, for you can meet them everywhere. It is a religion in which man is crowned and man accomplishes his own salvation. God has then made it possible, but man does it. But a preaching that makes election conditional and salvation dependent upon what man first will do, is so comfortless for a poor, discovered sinner who cannot find anything in himself but sin and iniquity.

Yet we must say that the tendency to seek to qualify ourselves for God's gracious gifts can also be found in the hearts of God's children. So often they say, “If I only would be thus or so, and if I would be more humbled, I could pray more fervently and weep more sincerely, then perhaps God would look upon me in mercy.”

But actually then we are doing the same as the Remonstrants. Then we are seeking a ground of recommendation in ourselves. It is such a lesson to learn that it is only free grace. This can be learned only in a way of dying to all our own righteousnesses, works, and whatever we may seek to present unto Him. God has not chosen because of faith, but to faith.

Election is the fountain of salvation, therefore there will also be the fruits: faith, true obedience, and a childlike fear of God's Name. It is true that so often God's children cannot find those fruits anymore. There may have been times in their life that their faith was so strong, their hope so lively, that they were so willing to follow Him in the way He would lead them, but there are also other times. And when God shows them by His Spirit more and more what they are and remain in themselves, then it will be so true what we read in Zephaniah 3:12, “I will also leave in the midst of thee an afflicted and poor people.” But it also says, “They shall trust in the Name of the LORD.”

When they may look away from themselves and may look at that fountain and see something of that unchangeable love and eternal good pleasure of the Lord, they may believe that He will finish perfectly what He for them has undertaken. How necessary it is that the anchor of our hope may be fastened into the solid ground of God's eternal love and His pleasure.

The apostle speaks in 2 Peter 1:10, “Wherefore the rather, brethren, give diligence to make your calling and election sure: for if ye do these things, ye shall never fall.”

The misuse of this doctrine

It is true, this doctrine can be terribly misused.

Not so long ago I read that some evangelists in the Netherlands visited some so-called Christian bars. There many young people from orthodox churches, also from our denomination, were together on Saturday nights, for drinking and fun.

The evangelists asked them whether they thought this was a good preparation for the Lord's day. Often they came home late or drunk. The answers they received were frightening because of the indifference they expressed. Several young people said, “Sure, I know it is not good, but there are only a few elected, and I am sure I don't belong to that little group anyway. Therefore I am here to have some fun.”

It is “Let us eat and drink, for tomorrow we will die.”

It is a carelessness which makes them say, “And if I am chosen, well, God will find me anyway.”

The market of free grace

It is so evident that we believe the father of lies. Awakened sinners can be attacked by the devil, who says that they are not chosen, are not among the elect, so that there is no hope for them. God's revealed will, however, in His Word says that there is grace and salvation for the chief of sinners.

The market day is not past yet. There is yet a fountain of grace and salvation, and thirsty ones may come to the waters, and those who have no money may come and buy and eat; they may buy wine and milk without money and without price.

The Remonstrants would say, “Please open your wallet, let us see how much you have, and then it will appear whether you have enough that God will elect you upon the basis of what you have. There must be faith and obedience.”

However, if our pockets are empty, and we do not find faith and obedience there anymore, we are yet welcome at this market. If we may come, by faith, with empty hands as beggars, we will experience with Mephibosheth that there is mercy. We then will receive mercy from the greater David, Jesus Christ, only for His covenant's sake. That will give adoration and a humble bowing before God, and they will praise Him.

That sinners are saved is only by the work of God. They are given to Christ, redeemed by Him, but also called and drawn to His communion by His Word and Spirit. He gives them justification and sanc...

It must be proclaimed that there is not only an election, but also a reprobation, because God's Word speaks of this. We do not know who these reprobates are. The calling of the gospel should be bro...

Although surrounded by mighty enemies, the church of God is kept by the power of God. Whatever may fall, God's children will never fall away from His election. The Lord is faithful to the end, and...

It is by grace only that people will be saved, not because of any merits in themselves; it is a free gift of God, given to them in Christ. They are chosen from eternity in Him who gave Himself will...

Believers sometimes struggle with doubts and fears and may miss the comfort of knowing that their safe arrival is certain in spite of their powerful enemies. However, the God of all consolation wil...