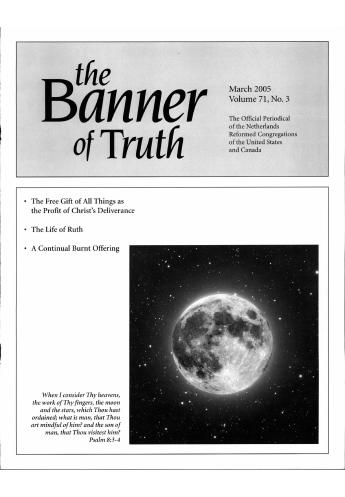 The church has been from the beginning of the world and will remain to the end of it. Christ is an eternal King who cannot be without subjects. The gates of hell will not prevail against this church.

The preservation of God's church is certain, because His purposes will not fail, not even in times of secularization in which many turn their backs to the truth. Not even in times as in Psalm 2, “Let us break their bands asunder, and cast away their cords from us.”

This attitude shows man's enmity and corruption. The fault of this corruption does not lie with God. He created man good and after His own image. Man was placed in paradise as the crown of God's creation, but he has fallen so deeply that only a wonder of grace, a complete renewing by the Holy Spirit, can save him.

We read of this corruption and the depth of our fall in the Third and Fourth Heads, Article 1.

Man was originally formed after the image of God. His understanding was adorned with a true and saving knowledge of his Creator and of spiritual things; his heart and will were upright; all his affections pure; and the whole man was holy; but revolting from God by the instigation of the devil, and abusing the freedom of his own will, he forfeited these excellent gifts; and on the contrary entailed on himself blindness of mind, horrible darkness, vanity and perverseness of judgment, became wicked, rebellious, and obdurate in heart and will, and impure in his affections.

The question may be asked why our fathers first describe the depth of our fall in Paradise. Are not the Third and Fourth Heads of the Canons a portion in which God's gracious work of restoration and renewing are portrayed in a clear and instructive manner? Why then do they begin this part with speaking again about man's total depravity? The answer is that the riches of God's grace will shine the brightest against this black background of our corruption and guilt. Thus God will receive the honor for His unmerited goodness. It will be “Not unto us, O LORD, not unto us, but unto Thy Name give glory, for Thy mercy and for Thy truth's sake.”

When God works in the hearts of sinners, He shows them their depravity. He teaches them that their bruise is incurable and that there are no healing medicines for their disease. However, then it will become such an eternal wonder when He speaks, “For I will restore health unto thee, and I will heal thee of thy wounds.” The prophet Isaiah speaks of this: “The chastisement of our peace was upon Him; and with His stripes we are healed.”

To show the depth of our fall, our fathers first speak of the height of glory in which man was placed in the state of rectitude. God created man good and perfect, after His own image and likeness. We may speak of the image of God in a broader and narrower sense. In the broader sense, man was an image-bearer of God, as seen in his outward appearance and his dominion over the creation. Man was, as such, entirely different from the rest of creation. He had an innate knowledge of God, and the beauty of God's creation was evident in his outward appearance. In a narrower sense, however, the image of God consisted in man's knowledge of his Creator, in righteousness of his will and heart, and holiness and pureness in all his affections. He was a prophet in order to know God, a priest to serve Him, and a king to reign with Him.

No, man is not a product of evolution, which is a theory of unbelief, defended by many with religious zeal. After God had created man, we read, “And God saw everything that He had made, and, behold, it was very good.”

It was man's delight to serve God and to walk in obedience to His will. There were no defects in the creation, no weaknesses. Sometimes we read that car manufacturers recall certain cars to replace parts that are unreliable. This was not so with man. He was created with the glory of God's image. This image was more than merely a bridle to restrain him from the evil lusts of his flesh, as Rome teaches. They say that, as a horse needs a bridle to control and direct him, so the bridle of the image of God was given to man to restrain and direct him, that he might live in obedience to his Maker. No, this is not true. The image of God was more than a bridle. It belonged to our human nature. We did not lose something additional but something essential in our fall in paradise. Man robbed himself of all the glorious gifts which the Lord had given him.

The depth of our fall

The prophet, who was created to praise God, became a liar; he had listened to the deceitful words of the devil, the arch-liar.

The priest, who had been created to dedicate his whole life as a living thank offering to the Lord, became an idolater who kneels before the idols of sin and iniquity and worships that big “I,” which is the greatest idol. The king, who was clothed with majesty, beauty, and glory and reigned over the creation in the name of his Creator, became a slave of the devil and of sin.

No, we no longer have a free will but are in a terrible bondage. We are bound to the prince of darkness. We are slaves, and yet we imagine we are free. We are blind, and yet we believe we see. We are unhappy and miserable creatures, and yet we may imagine we are rich and increased with goods. How necessary is the uncovering work of the Holy Spirit in our lives. Therefore the prayer is so necessary: “Lord, show me myself.”

The Lord Jesus Himself said, “They that are whole need not a physician; but they that are sick.” This knowledge is not necessary to qualify us for this Physician, but to drive us out to Him. Our fall is so deep that no words can express it. Our fathers speak of “blindness of mind, horrible darkness, vanity and perverseness of judgment,” wickedness, rebellion and being “obdurate in heart and will, and impure” in our affections.

We can find our picture in Romans 3:10-18. It is not a flattering picture. Be cautious with those who can so easily elaborate on how wicked and perverse they are. If the depth of our fall is really shown to us, we bow our heads, being ashamed, and we mourn and confess our sin before our Maker.

Has this ever become reality in our life? Did the Lord bring us back to Paradise, so that we became Adam before God? Then all hope of self-improvement was cut off, and we became condemnable before God. Then God would do no injustice if He would pass us by and never speak to us a word of hope or promise. However, what an eternal wonder it is that God came to seek man when he fled trembling from Him. God was the first in the life of Adam and Eve, and so He still is in the lives of lost sons and daughters of Adam. He opened a way of salvation. He promised the Seed of the woman, the second Adam, who would “restore that which He took not away” (Psalm 69).

It is the work of the Holy Spirit to make room for Him in the hearts of sinners, to break the enmity against His free grace, to make a sinner willing and longing to be saved by such a necessary, suitable, and willing Savior.

Do we know Him? Has He become precious to us? May the Lord give us the knowledge of the first Adam and of the depth of our fall, but also the knowledge of that precious, glorious second Adam, the Lord Jesus Christ. In Him is salvation for the chief of sinners, also for young people and children.

The Belgic Confession of Faith (16)

Article 14 In the past articles we have dealt with the first part of our Confession: the doctrine about God and about Scripture. We have heard about the existence of...

God So Loved the World

A need for Clarification How very well known these words are! There is perhaps no passage in Scripture which is quoted more often throughout the world than the words...

THE STRENGTH OF FAITH

Faith gives assurance to the people, who may possess this. It gives communion with God and Christ, it opens an invisible world. This is no imagination, but it is reality, it is true, it is experien...

How Do We Learn To Read in the Book of Nature?

They who walk in nature or are familiar with the creation should receive instruction from it. It should lead us unto Him, from whose hand all things came forth. “Who knoweth not, in all these that...

Male and Female Created He ThemAdam’s marriage was not the first! Long before Adam and Eve were created, God had decreed a marriage covenant with His Church, and the union between Adam and E...