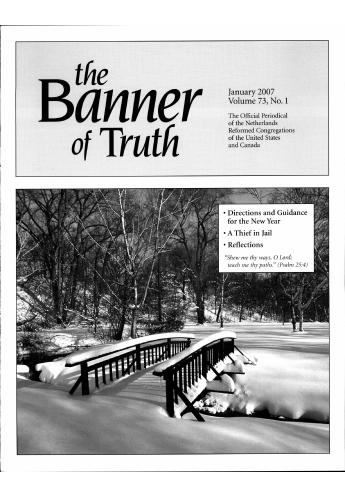 The sins of God’s children offend and grieve Him. As a consequence of this the workings of the Holy Spirit may be withdrawn, and darkness comes upon the believer. Then there is no joy, no peace, and no rest in their heart. They lose the sense of God’s favor for a time, and it may seem as if He has forsaken them. This would be so deserved; however, He will come back at His time upon His own work. Although we are unfaithful, God is faithful and cannot deny Himself.

He will cause them to return to Him with weeping and supplications and with upright confession of their sin. The Lord will again shine with the light of His fatherly countenance upon them. He will show His mercy to them. Of this we read in the Fifth Head, article 6.

But God, Who is rich in mercy, according to His unchangeable purpose of election, does not wholly withdraw the Holy Spirit from His own people, even in their melancholy falls; nor suffers them to proceed so far as to loose the grace of adoption, and forfeit the state of justification, or to commit the sin unto death; nor does He permit them to be totally deserted, and to plunge themselves into everlasting destruction.

It is true, those disobedient children have grieved their Father, but He will not abandon them. What is the reason for this? We read in Ephesians 2:4, “But God, Who is rich in mercy, for His great love wherewith He loved us.” That wonderful, “But God..He does not do it for their sake, but only for His great Name’s sake. We read in Malachi 3:6, “For I am the LORD, I change not; therefore ye sons of Jacob are not consumed.”

God does not wholly withdraw His Spirit

It would be hopeless if God were like we changeable creatures, but He is not. He has loved His people from everlasting and chosen them in Christ who is the Head and Mediator of that unbreakable covenant of grace. No, the doctrine of election is not a stumbling block but a source of rich comfort for His people. It was free grace that the Lord turned them unto Himself and called them out of nature’s darkness into His marvelous light. It is also His unchangeable love that He continues with them; by this we mean that He does not wholly withdraw the Holy Spirit from them. It may seem so, and they certainly have deserved it, but, even though the operations and comforting presence of the Spirit may have been withdrawn from them, with His Spirit Christ abides with them forever.

When God’s people fall into sin, His Name is dishonored; they do not sin cheaply. It may be as with David in Psalm 32:3, “When I kept silence, my bones waxed old through my roaring all the day long.” Fear may fill their heart that God will never return to them anymore. Therefore David pleaded in Psalm 51:11 “Cast me not away from Thy presence; and take not Thy Holy Spirit from me.” When David looked at himself and his grievous fall, he saw many reasons that the Lord should cast him away; however, this is not possible. The Lord will not alter His covenant word which He has spoken.

No falling away from the state of grace

If you would have heard Peter swearing that he did not know Jesus when he was in the hall of Caiaphas, you would have thought to see clear evidence that he had been a hypocrite. He had publicly denied his Master. Would there be hope for such a man? Yes, it may come close; but God’s children will never fall out of the state of grace. Their condition may be terrible, but their state is firm in the unchangeable love and good pleasure of the Lord. Whosoever has become a child of God by grace will remain in that state. The Lord Jesus Himself has said in John 10:28, “And I give unto them eternal life; and they shall never perish, neither shall any man pluck them out of My hand.”

When Peter sinned so grievously in denying his beloved Master by saying, “I don’t know Him,” Christ prayed for him and said as it were, “But I do know him as one of those given unto Me by the Father.” Oh, that prayer of the great High Priest which still continues while He is exalted in glory and says in John 17:12, “Those that Thou gavest Me, I have kept, and none of them is lost.” In this continuing prayer of the High Priest lies the certainty of the preservation and therefore perseverance of the church.

Thomas fell into a terrible condition and brought darkness upon himself when he listened to the voices of unbelief and human reasoning and stayed home from church. His condition was full of distress and misery. Yet he was a true believer and, therefore, in the state of grace and of faith. Thus we must make a distinction between the state and condition of believers. Their condition is highly changeable, but their state is not because God does not change.

The sins of God’s people grieve the Holy Spirit. This, however, is not the same as committing the sin against the Holy Spirit which is the unpardonable sin. The Remonstrants believed that this sin can be committed by a child of God so that he would still perish. Oh, what a comfortless teaching, what a frightening doctrine this is for one who knows that he is inclined to halt and stumble. The most exercised ones of God’s people know that when left to themselves, they cannot stand for a moment and will fall. They beg the Lord to not let them go, not even for a moment or they would perish, and His great and precious Name would be dishonored because of them. Yes, it is true, the more light the Lord gives, the more they will be afraid of themselves and the more earnestly their prayer will be that the Lord might preserve them.

What a wonderful and meaningful word is the word “kept.” The apostle not only speaks of an inheritance which is reserved in heaven for the Church of God but also says that they themselves are preserved for this inheritance. We read in 1 Peter 1:5, “Who are kept by the power of God through faith unto salvation.”

Often the devil assaults distressed souls by causing them to question whether they have committed this unpardonable sin. It is a sin which willfully mocks the workings of the Holy Spirit. It is a malicious ridiculing of God’s holy work and that against better knowledge. The Lord will keep His people from committing this sin and will not allow them to be totally deserted. They will not plunge themselves into everlasting destruction. We know that “whosoever is born of God sinneth not;” (that is the sin unto death) “but he that is begotten of God keepeth himself, and that wicked one toucheth him not.” The devil cannot destroy the work of God even though he may fiercely assault the believer. (Those who do commit the sin against the Holy Ghost are not afraid for it, nor do they have any sadness or sorrow about it.)

God’s people may go far astray and sink deeply, but they will not perish. Christ has been forsaken by God for them so that they may never be forsaken by Him. That is the comfort for a people who, in themselves, are helpless and undeserving.

It is the sincere desire of God’s children to be holy and to walk in the tender fear of His Name. Discovering light and painful, humbling experiences will teach them, however, how helpless and defe...

The Lord builds His church in spite of all opposition and enmity against Him, and it is His work alone, not that of man. This does not mean, however, that we do not have to use the means of grace d...

The Heidelberg Catechism (27) (Explained for Children)

This Lord’s Day speaks again about holy baptism. Question 72: Is then the external baptism with water the washing away of sin itself A...

Pentecost calls to remembrance the outpouring of the Holy Spirit. It was for this reason that Jesus had ascended into heaven; glorified and sitting on the right hand of His Fa...