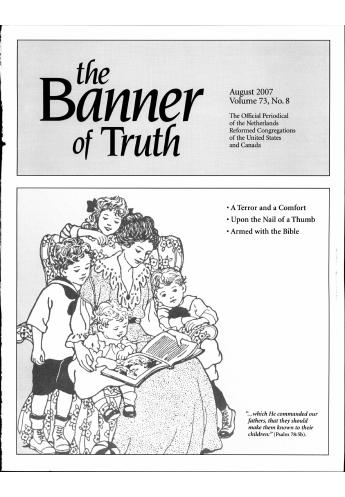 Upon the Nail of a Thumb

A person can at times be burdened with many questions; they may even keep him awake. Most of these concerns, however, can become relatively unimportant. In the final analysis, there are not so many concerns which are of great importance. If we would have to formulate one remaining question, what would that be?

The river of death

Death can appear suddenly; we are regularly shocked by such news—a mother and her daughter snatched away in a traffic accident—a young man has met with an accident at work, leaving behind a widow with small children—a family member has received a dreadful message from a doctor—then the message comes close to home. It can come even closer, however; there can come a time in our life when we are personally faced with death. For those who realize that dying is to enter into eternity, such a moment can be a terribly gripping event. Elihu, Job’s friend, speaks, “Yea, his soul draweth near unto the grave, and his life to the destroyers” (Job 33:22). In this connection I frequently have to think of the journey of the children of Israel to the land of promise. At the end of the journey lay the Jordan, the river which formed the boundary of Canaan. They must go through this river. They must have heard about it from time to time during their journey. Yet when they came to the vicinity of that body of water, the officers went throughout the host of the Israelites with the message, “.. .that ye may know the way by which ye must go: for ye have not passed this way heretofore” (Joshua 3:4). To talk about the Jordan is quite different from having to go through it.

As a worm over the ground

Since ancient times the Jordan is correctly compared with the river of death. If there is one thing about which speaking (and preaching) is different from experiencing it or going through it, that is death. I must tell you that I have frequently preached and spoken about death, but dying itself remains a terrible reality. I am frequently reminded of this fact in reading a passage from Comrie’s explanation of Sunday 1 of the Heidelberg Catechism. He writes there about one of his professors during his student years in Groningen. It is about Anthonius Driessen. Comrie had seen in this man’s life how that a person receives no help from all of his study and the head knowledge which he has attained when the reality of eternity is placed before him. Comrie relates, “I have clearly seen this of one of the professors under whom I studied who, at one time when I was with him, suffered such terrible soul’s strife that although he was still here upon earth, appeared to be in the depths of hell, for he crept upon the ground as a worm crying, ‘O God! Is there yet a way of escape? Reveal it unto me!”’ This is the man who, earlier in his life, had published Gratia Victrix. Note well the title of Driessen’s book, Gratia Victrix, which means Victor by Grace—a beautiful title for a book, undoubtedly written by an orthodox theologian. Yet.. .there crept that man! What I find to be the most gripping aspect of this occurrence is the fact that the presence of one of his students did not keep this professor from creeping over the ground as a worm. For this to happen, we must know each other very well and also fully trust one another, and the need had reached a critical point! A person must have experienced such a need to understand this. After an experience of this kind, we learn not to speak with such ease about death as is so common with many, not only in the world but also in the church. The question comes to us anew as to what is essential in such circumstances? What is the one question which remains? There once was a child of God who answered this question in a peculiar manner. She pointed to the nail on her thumb and said, “What is important? I can write it on my thumbnail with two words — In Christ. I must be in Christ.”

We teach with certainty, based on the authority of Scripture, that the crucial time in a person’s life is at the moment of the new birth. At that time a person translates from death unto life, from darkness to light, and from the state of wrath into the state of life. There is a change of ownership. We are also completely convinced that at that time the sinner feels himself hopelessly poor and wretched, lost and without God. Do not ask me to explain this paradox because I am unable to do so. I do know, however, that this is according to Scripture. God’s Word speaks in many, many places of God’s mercy toward a miserable wretched heart which sorrows after God. Let us not come with the proposition that God’s Word teaches that spiritual life can be found only after we have consciously accepted Christ. Those who would question this, should take the time to read Comrie’s explanation of Sunday 7 of the Heidelberg Catechism or the entire explanation of the Heildelberg Catechism by Rev. G.H. Kersten. Much has previously been written about this subject so that I will not expand on it further at this time. What we are concerned with now is the fact that we are convinced that a person cannot travel to his eternal destination by arriving at a few conclusions such as: “I am not at ease, I have seen something of my lost state, I know something of missing God,” therefore... “This is not all of my own making; I can’t really be unconverted.” We should not hesitate to call such reasoning extremely dangerous. I am sometimes indignant when some people assert that the preaching in our congregations is supportive of such grounds as drawing conclusions, thereby putting people at ease. We do not preach that way.

For the soul to have comfort for time and for eternity, and to be able to appear before God’s face, he must not only be in Christ alone, but he must also know that he is in Christ. Rev. G. H. Kersten mentions in one of his writings that our salvation does not depend upon certain exercises of faith but only upon our being in Christ. Upon this we give a hearty amen; think of the thumbnail! Once again, when it concerns the comfort, the rest for the soul, the foundation of our life can be sure only if we have found the Rock, no matter how long and sorrowfully we may have sought it.

Let us therefore be discerning not only in our doctrine but also in the preaching, and above all in our personal life. There is a work of the Holy Spirit in the sinner, a saving work. That work begins in the hour of the rebirth. That work distinguishes itself in a deep humility and with a realization, more and more, of our completely lost state. This work will continue until we own our guilt and agree that God would be just in our eternal condemnation. At such a time we agree wholeheartedly with the words of Psalter 143:2

Against Thee only have I sinned,
Done evil in Thy sight;
Lord, in Thy judgment Thou are just,
And in Thy sentence right.
Behold, in evil I was formed,
And I was born in sin,
But Thou wilt make me wise in heart,
Thou seekest truth within.

In this bowing there can be found a sweetness if I may express it in an old-fashioned manner. The lesson that we should learn, however, is that this sweetness is not the same as salvation. The ground of our salvation can never lie in anything in us, and that includes the place-making work of God’s Spirit within us. Those grounds can only be found outside of us in the mediatorial work of that inexpressibly beloved Man of Sorrows, in His wounds, in His blood, and in His righteousness. Thus we come to the answer to the question wherewith we started this article, which we can find in Sunday 1 of our Book of Comfort, the only comfort both in life and in death.

A Leaf That Will Not Fall

Rev. J. den Hoed, Franklin Lakes, NJ It is fall. All around us we can see this. The trees which a short time ago were laden with fruits are n...

A Leaf That Will Not Fall

It is fall. All around us we can see this. The days become shorter, the nights colder. The trees which a short time ago were laden with fruits are now letting their leaves fall.That falling...

You Are Seriously Ill…

As soon as you read the title of this article, you will know immediately what the contents of it will be. There are so many of us, who at certain times receive the message that we are seriously sic...

The Only Hiding Place for the New Year

Rev. J.B. Zippro, Grand Rapids, MI The old year has passed very quickly, and the New Year lies ahead of us. Again we and our children were pr...

Uitgave: Upon the Nail of a Thumb