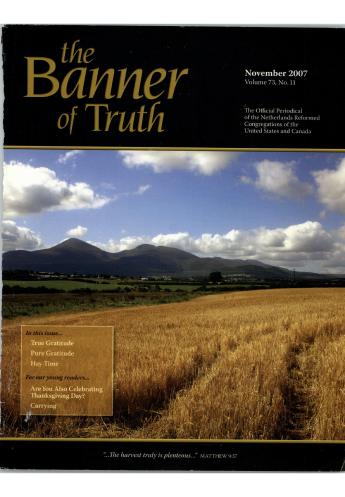 The Heidelberg Catechism Explained for Children (48)

We now consider the second petition of the Lord’s Prayer.

Question 123: Which is the second petition?

Answer: “Thy kingdom come ; that is, rule us by Thy Word and Spirit, that we may submit ourselves more and more to Thee; preserve and increase Thy church; destroy the works of the devil, and all violence which would exalt itself against Thee; and also, all wicked counsels devised against Thy holy Word; till the full perfection of Thy kingdom take place, wherein Thou shalt be all in all.

This petition is a prayer regarding the kingdom of God. In a kingdom there is always a king or a queen. The Netherlands, for example, has a queen, and all the Dutch people belonging to that kingdom are the subjects of it. In the kingdom of God, the Lord Himself is the King. Who are the subjects? They are people who have become children of God. The Lord Himself takes care that there are subjects and that more are continually added. When someone is converted unto God, the Lord becomes his King. The Lord is then King in his heart, and he is a subject of King Jesus. On earth, where is God’s kingdom? It is in all places where the Lord is King in the hearts of His subjects.

What does a king do? He rules over his subjects. He makes laws which state how his subjects must live and how they must serve him. He protects them from enemies who come against them. In this way a king provides and cares for his subjects.

What is the meaning of the petition, “Thy kingdom come”? The person who prays is saying, “Lord, Thou art the King. Wilt Thou rule over us by Thy Word and Spirit?” Indeed, God’s Word tells us how we must serve the Lord. What need is there then for the Spirit, the Holy Spirit? Well, our hearts are evil and rebellious against the Lord, and therefore we are not willing to obey the King. However, the Holy Spirit can provide that we submit ourselves to the King and that we are obedient to Him. God’s children must become more and more obedient to their King.

“Thy kingdom come.” Hear then, what is requested in this prayer, “Lord, provide for Thy subjects. Cause more and more people to become Thy subjects so that Thy kingdom may be increased and extended. Thou wilt then be increasingly honored. Lord, wilt Thou destroy the works of the devil?”

Yes, the devil is the archenemy of King Jesus and His subjects. The devil is also a king, a very powerful king. He is called the Prince of Darkness. He also has subjects. All people become his subjects, and we do this willingly. That shows us how terrible sin is. When the Lord converts a person, the devil has one fewer subject, and King Jesus has one more.

You will understand that the devil tries in all ways to prevent the loss of his subjects. He fights against it, for he wants to retain his subjects. What force he uses; think only of the apostles. They proclaimed the gospel to the people, speaking of a turning unto God and the forgiveness of sins by the Lord Jesus. Then the devil caused them to be put into prison.

King Jesus is mightier, for He is Almighty. He continues to bring people to conversion, and He continually adds to His subjects. Indeed, there are times when very prominent subjects of the devil become His subjects. Think of Saul of Tarsus, who later was called Paul. What a prominent subject of the devil he was. He was like a general in the devil’s army to fight against the Lord. He went with ropes and swords to take children of God captive, to cast them into prison, but what did he become? He became a distinguished servant of Jesus, a general in His army. He then fought for his King, for the Lord. No, he did not fight with ropes and swords, but he preached the gospel. God took care of this. King Jesus is so powerful.

In this way His kingdom becomes ever greater. One day it will be complete; it will be as large as God desires it to be. Then the kingdom of the devil, with all its subjects, will be totally destroyed. How terrible it will be if you are still a subject of the devil. Then only the kingdom of the Lord Jesus will remain. There it will no longer be necessary to fight, for all enemies will be slain, and the Lord will be the eternal King. His subjects will eternally be with Him and will live in eternal blessedness with Him, there to eternally adore, serve, and praise their King.

Christ’s kingdom is not yet complete; more subjects still need to be added. The King Himself will cause it to happen by His Word and Spirit. The devil is a king who will cause you to be eternally unhappy. Jesus is a King who will make you eternally happy; therefore the Lord says to us, “Let Me be King in your heart.”

We Have Another King

The apostle Paul had brought the gospel to Thessalonica. However, Satan was not sitting still. The Jews had stirred up certain lewd fellows of the baser sort against the Christians. A riot develope...

Mr. T.Mrs. K. is sick; yet her sickness is not unto death. O what a mercy that her soul is alive — to God — in Christ. United to Him, she is one with the fountain of life, and cannot be cut...

The Heidelberg Catechism in Questions and Answers (30)

Part IIIt is not God’s usual way to teach His people everything in one day. Certainly, God is free. Saul of Tarsus was privileged to learn much in three days, and with the jailer it took eve...