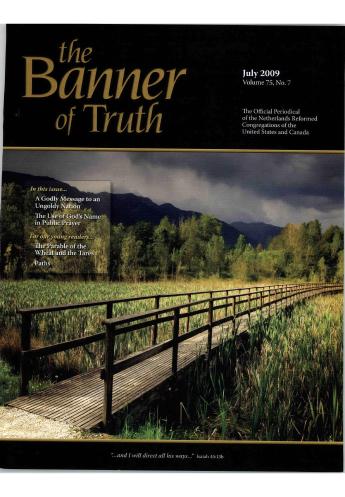 “He that is not with Me is against Me; and he that gathereth not with Me scattereth abroad” (Matthew 12:30).

In this text the Lord Jesus points to the fact that there are only two types of people, namely, those who are for Him and those who are against Him. We frequently act as if there are three types of people in the world. We are not converted, but neither do we wish to be considered as being of the world; therefore, there must be a third type of people. In our text the Lord tells us that this is a mistake. Who is not for us is against us! He who does not build up or “gather” with Christ breaks down or “scattereth”; he sets himself up against God. He is not a friend but an enemy. There are, therefore, two kingdoms: the kingdom of darkness and the kingdom of light. From this it follows that there are two kings, namely, Christ and Satan. Since these kings also have subjects, there are also two types of people, viz., the seed of the woman and the seed of the serpent. Between these two types of people, there exist irreconcilable differences, which means that the heart of a person is therefore a throne whereupon either the one or the other king is the ruler. He who serves the one king is an enemy of the other.

By nature we are enemies of Christ; many confess this fact openly. They mock recklessly with God and religion. They hate God, His people, and His service. They seek their salvation in the pleasures of this world. Do not think, however, that these people can be found only in the world around us! No, they are also found in church. There are many young people who are still occupying a seat in church but who have made a firm decision that they will leave as soon as they are old enough. They do not care for the service of God, and they have no desire to live in the fear of the Lord. Their hearts go out to the world. They call loudly, “Depart from me, for I have no desire for Thee to reign as King over me,” and so they run on toward their eternal destruction. How foolishly they conduct themselves, for what advantages does the world give them? Soon, at death, they will have to leave behind all wealth, treasures, goods, and position, no matter how important that position is or how extensive their possessions may be.

Above all, everything points to the fact that they cannot find their well-being in this world. What advantages are there in sin? Perhaps there is some temporary pleasure in the committing of sin, but the aftertaste is bitter, and the wages of sin is death. What advantages does Satan give? He may place before you the choicest things, but in the end he will give you nothing but eternal destruction. Tell me, “Why are you so against God and His service? What wrong has He done unto you? It is His wish to save you from destruction and grant you eternal life. Why, then, do you not consider and seek after the Lord?”

Perhaps you think that you are different. You are well disposed towards the Lord’s service and His people. You would not think of severing the ties with the church. No, really, you are not against the Lord, but on the contrary, you are for the Lord. Think not, however, that it is then well with you, for it is not written, “Who is not for Me is against Me,” but, “Who is not with Me is against Me.” You can, therefore, be for the Lord yet not be with Him! Oh, how one day you will wish that you had been with Jesus when He will call out to you, “Depart from Me, all ye workers of iniquity...” (Psalm 6:8).

Someone may be appealing to you, yet you do not seek to be close him. We may have differences with someone even though he is our friend and companion. So it was also with the multitude. They had some feelings for Jesus; they even wanted to make Him king. They called Him the Son of David; they called Him a great prophet. They even called, “Hosanna, blessed is He that cometh in the Name of the Lord, He who is the King of Israel.” Somewhat later, however, they chose Barabbas. When the time came, they wanted nothing to do with Christ. They halted between two opinions, wishing to serve both God and the world, but no one can serve two masters. To be with Christ means to leave everything behind, denying ourselves, taking up His cross, and following Him. That is what the Lord Jesus spoke to the rich young man, and then it was revealed that although he was for Jesus, he did not wish to be with Him.

If you seek your salvation elsewhere, you may praise Jesus with your mouth, but at the same time you are denying Him. If Christ is not your all, then He is nothing for you. As long as we are unconverted, we are adversaries even though we take the side of the Lord and His people. If we are not with Him, then we “scatter abroad.” Then we set ourselves against God; we harden ourselves under the preaching of the gospel because under its proclamation we cannot remain the same. It is either a savor of life unto life or a savor of death unto death. Consider that we then also “scatter about” others. Surely, if we would be with Jesus, we would walk in His light and also be a light ourselves. Then others would become jealous of us. If we are only for, without being with Him, then our religion is nothing but form and custom, and that becomes abhorrent. Surely, “He that is not with Me is against Me; and he that gathereth not with Me scattereth abroad.”

Do you know what it is to be with Jesus? It means to be united to Him most intimately. It means to be implanted into Him through the working of the Holy Ghost and thus become a living member of His body through the new birth. Such persons have said farewell to Satan and have left the world because they came to love God, His service, and His people. The Holy Spirit opened their eyes so that they came to see their misery and also became aware of what a hard master Satan is. How wretched was their state, and how bitter sin became. Oh, if there were only someone who could deliver them from the greatest evil and bring them to the greatest good. They began to need a Savior. What joy there was in their heart when that only Name was declared unto them, for then they also could be saved. That possibility, however, had to become a reality unto them, and that reality made them plead, “Comfort my soul in its sorrow, and say, “I am thy salvation.’”

How great their salvation became when He revealed Himself unto them; then they wished to know nothing other than Jesus Christ and Him crucified. How they longed for His nearness. To be by Him and with Him became their one and only desire. With Paul they called out, “Having a desire to depart, and to be with Christ; which is far better” (Philippians 1:23b).

When they are in such a condition, they cling to the Lord, and they are of one spirit with Him. They think of the things which are above, where Christ is, and it can be seen in them that they are with Jesus because the same passions which are seen in Christ are also revealed in them. They consider others more excellent than themselves. They assemble with Christ, and they seek to win over their neighbors for Christ. It is for that reason that they warn against the service of sin and they commend the service of the Lord. Their words are not empty words; they carry authority.

They seek to break down the kingdom of Satan whenever that is possible, but, of course, Satan does not sit by quietly. He causes the entire world to rise up against them. How they experience the hatred of the world. They who are with Jesus must also suffer with Him, but in that suffering they are lovingly comforted, for those who must suffer with Him will also be glorified with Him. Even death will not separate them from the love which is in Christ Jesus. Death will bring them unto Him, so that they will be forever with Him. To be with Him in the future you must already be with Him now. You may be for Him, but that is not to be with Him, and who is not with Him is against Him. Are you still against Him? Then fall down at the feet of the Lord, for He is able to make followers of those who are against Him.

After the Lord Jesus had fed the multitude of five thousand, the people desired to take Him by force and to make Him a king. Perhaps even His own disciples were carried away with this idea. The Lor...

During the passion weeks we may hear the gospel of the bitter suffering of the Lord Jesus Christ. Truly, “He is despised and rejected of men; a Man of sorrows, and acquainted with grief.” And bless...

Rev. J. Van Haaren (1933-1983) In our text Christ speaks about His departure. In this context He is not only speaking of His suffering and de...

Pastoral Guidance for the Administration of the Holy Supper

— continued — Those not attending Until now I have said something about the true frame of the little ones and also the established ones in faith. But the Holy...

In the last part of Romans 8 we may listen to the song of triumph of God's children. In it they sing of that which they have received of God through and in Christ.Only listen: “If God be for...

Uitgave: Upon Which Road Are You Traveling?