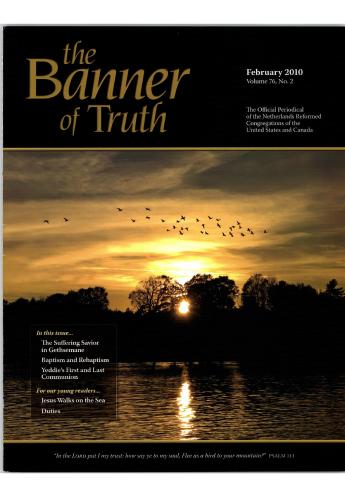 “And He was withdrawn from them about a stone’s cast, and kneeled down, and prayed, Saying, Father, if Thou be willing remove this cup from Me: nevertheless not My will, but Thine, be done. And there appeared an angel unto Him from heaven, strengthening Him. And being in an agony He prayed more earnestly: and His sweat was as it were great drops of blood falling down to the ground” (Luke 22:41-44).

The place mentioned in this text is well known. Each year as we pass through the Passion weeks, our attention is directed to the Garden of Gethsemane. It is at this place that the words are repeated which Moses heard when the Lord came near unto him. “Put off thy shoes from off thy feet, for the place whereon thou standest is holy ground.” There Christ comes to be the head of His Church; it is the man Christ Jesus. He is the One who spoke in the eternal regions, “Father, send Me; I will stand in the breach between My Father and His people. I will satisfy My Father’s justice and deliver and restore My Father’s people.”

This is the Father’s only begotten Son. He has promised that He will tread the winepress alone. What an inexpressible blessing it is for His Church when they may stand at a distance and see the wonder of God’s grace and mercy in what must now be accomplished. Who are they? They are the ones who the Father has loved with an eternal love. Their origin is not in themselves but in the eternal love of the Father. They are those who have sinned unto death, which has caused a deep gulf between them and God. They are the ones who are lying deep in sin, enemies of God and of His Word. They are also the ones who have been called out of darkness unto God’s light by a powerful irresistible calling. They are the ones who have learned that they need a Savior to deliver them, a Mediator to stand in the river of God’s wrath for them. They do not yet know this, but, in God’s time, by grace, they will learn it.

There we see Jesus go. Eight of His disciples remain behind, and three may go along with Him into the garden. One of them is Peter. He is the one who spoke saying that he could die with Him. The other two are the sons of Zebedee. They believed that they could drink of the cup from which Christ must drink. Jesus says unto them, “Pray that ye enter not into temptation,” and then He withdraws from them about a stone’s cast. His Father is now waiting because sin and guilt must be atoned for; His people are now waiting, for a way must be opened unto eternal life. The sword of God’s justice is now hovering over the Shepherd.

It is remarkable that Jesus came to a garden. This causes us to think of another garden, the home which had been created for man, the Garden of Eden. It was in that garden where man lost all. It was this garden from which he was banished, wounded unto death, but, in this garden, the Garden of Gethsemane, balm for that wound is being obtained. How blessed is that people who may come to know the wound and the need of this balm. The world does not need this balm. They say, let us eat, drink, and be merry. The religion of our days does not need the balm because they do not know the wound, but there are people who have been awakened to the knowledge of their missing, and with a heart burdened with sin they may stammer, while looking into this garden, “With His stripes we are healed.” Oh, led into the knowledge of the depths of their misery outside of such a Savior they cry, “Oh, that my soul might know Him.”

In the Garden of Eden angels wept, and the devil rejoiced. Here, in the Garden of Gethsemane you will notice much suffering, but the devil becomes quiet, and the angels begin to sing. It is here that the Church of the Lord stammers, “How great the love of the Father, how great the love of the Son, how precious the work of the Holy Spirit in applying to us this price.”

All is quiet now; there is only one voice heard. It is the voice of the suffering Surety. “My soul is exceedingly sorrowful.” Why is His soul sorrowful? It is because here the sins of His people are placed upon Him. Here the flaming sword of God’s wrath is descending. Here, the hell which we have merited takes hold of Him to drag Him to the very bottom of everlasting darkness. We read that He, meaning the Mediator between God and His people, kneels down and prays. In the deepest soul distress He turns to His Father, saying, “Father, if Thou be willing, remove this cup from Me: nevertheless not My will, but Thine, be done.” He, the only begotten Son of the Father, prays, “Holy Father, this is Thy will. This is according to heaven’s eternal covenant. This is the only way to save my Father’s people. Help Me to drink this cup.” While the enemy is closing in, He uses the only weapon which is now available; He prays, and He clings to His Father’s will. With this weapon, He bows in deepest submission to His Father’s will.

We then read that an angel appears unto Him from heaven, strengthening Him. Luke writes that the suffering Saviour is strengthened from heaven. How? The angel holds before Him the great reward which will follow this indescribable sacrifice. There, for a moment, Christ may see the Father’s holy law restored. There He may see all the redeemed Church of God before the throne. For a moment He hears them singing the Father’s praises in those heavenly regions.

Is not this the way it is with those people who have been bought with the price of His precious blood? There they stand as an unworthy and hellworthy sinner, pressed down ever deeper by the burden of sin. What a privilege it is when, in prayer, they may come to the time of everlasting mercy—when by the grace of God they may be brought to express a few stammering words, “Thy will be done,” when for a moment they may receive a glimpse of that finished work of the Son of God, and where they may hear, “I will never leave thee nor forsake thee.” “Why not, Lord?” they ask. “We have deserved to be forsaken, to be cast away forever.” What a privilege it is when there they may receive an eye of faith and their eye may be directed into the garden to see that only price which is acceptable with a holy and just God. Luke says, “And being in an agony He prayed more earnestly: and His sweat was as it were great drops of blood falling down to the ground.”

This is the price required in heaven to take away the just wrath against sin. This is the price for which a people, called out of darkness, led by the Spirit of God, come to hunger, that they may have something of that blood applied to their heart. Then in deepest agony they cry, “Lord, one drop of that precious blood to wash and cleanse me.” One drop of that price is more to be desired than all the gold and silver of the world. This blood conveys to sinners that there is a hiding place for those who cannot find a hiding place anywhere else. When considering something of this price, they say with David in Psalm 61:2, “From the end of the earth will I cry unto Thee, when my heart is overwhelmed: lead me to the rock that is higher than I.” Seeing this, what more do the people of the Lord need? They need to be driven away from all foundations placed outside of this Rock and to be given a time when they may say with the disciples of old, “And they saw no one but Jesus alone.” What a wonderful lesson, and how necessary it is to experience that we lose everything of our hands and arms in order that Christ may become the “strength of my spirit, my portion for aye.”

Dear reader, that wonder of God’s grace has a beginning. Do you know something of such a beginning? That wonder of God’s grace also has a continuance. In such a continuance, God’s people become ever poorer in themselves so that this price may become the only true way. Upon that way, the wonder becomes ever greater that from heaven God gave such a way, such a price, and that He looked upon such a wretch as I am.

The place mentioned in this text is a well-known place. Each year as we pass through the Passion weeks, our attention is directed to the garden of Gethsemane. It is at this place that the words are...

Rev. C. Vogelaar, Covell Avenue, Grand. Rapids, MI During the Passion months, we may hear the gospel of the bitter suffering of the Lord Jesu...

Uitgave: The Suffering Savior in Gethsemane