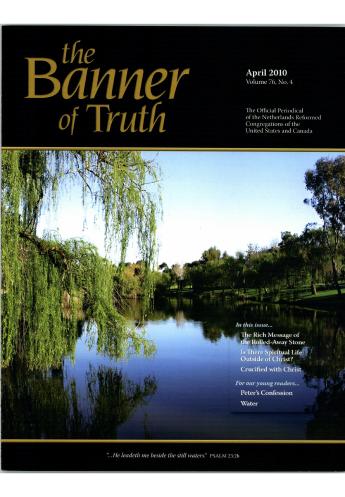 Is There Spiritual Life Outside of Christ? (1)

The question we wish to consider is one which has frequently been discussed. We would describe it as follows: In our congregations, but also outside of our denomination, we are always taught that regeneration is the beginning of all true spiritual life. Prior to this regeneration a person is dead in sins and trespasses. We do not teach of “preparations leading to regeneration,” that is, not from man’s side. It is either dead or alive; there is no middle way or state between them.

All this is, in our opinion, purely scriptural and not an invention coming out of our church circles. Think only of such texts as John 3:3 and Ephesians 2:1, but then follows the difficulty which I indicated: we always teach that in regeneration the sinner does not have to do with Jesus but with God. In that hour of quickening the uncovering light of the Holy Ghost falls upon God’s Word, by which the sinner is brought before the mirror of God’s law and in the bright light of God’s pure attributes.

The deep breach which has been made by sin between the Creator and our soul is experienced with grief. The sorrow after God because of sin is aroused and works a repentance to salvation not to be repented of (2 Corinthians 7:10). The Mediator at that time is, for such a person, a hidden Person.

Yet, and here lies the question, it is always emphatically taught among us that a sinner who lives and dies outside of Christ will be forever lost. Who does not know the words, “Outside of Christ there is no life but an eternal perdition of the soul”? Then one has a sense of the question: since spiritual life begins at regeneration when the sinner does not yet know Christ, and outside of Christ there is no spiritual life, is there not an enormous contradiction that cannot be resolved?

People have tried to resolve this difficulty from two different sides. Let me first say that neither of these two solutions is to my liking or agreeable to Scripture. On the one side there have always been those who have defended the position that the life of grace only begins where the Person of the Mediator is known and embraced in faith. From time to time there are still pamphlets, brochures, and booklets from which, in reading them, I more and more get the impression that the writers have filled their pens with vinegar instead of with ink. In these pamphlets, etc., attempts are made to expose the “errors of our teaching.” It is not my desire to mention names, for it would give too much honor unto them, but invariably such writings are published to bring to the foreground the alleged errors of our congregations by saying that we teach that there is life outside of Christ or, even worse, that a person could be saved outside of the knowledge of the Mediator.

Often they try to support their position that the life of grace begins with the personal knowledge of the Mediator by quoting an old English Puritan or Rev. T. Van der Groe; all that takes place prior to this is ascribed to the common work of the Holy Spirit, which one can also encounter in reprobates. They then, in order to support their position, quote selectively from mostly liberal statements of Calvin and the old writers.

I have the impression that Alexander Comrie also encountered such people in his days. At any rate, he writes in his explanation of the seventh Lord’s Day: “Men say that all that takes place before the actual receiving is at best only common work with which they shall go lost; they teach such dejected ones that before they can receive life in Christ, they must go to Him and accept Him and that by doing so they will receive life and the new nature. Men tell them wherein this acceptance consists and what the results of it are. These things make deep impressions upon the tender and concerned beginners since they, in the beginning, know how deceitful their hearts are and how sad it would be to be deceived in the end, and thus, they cast away everything that they experience as if it is only their own work.... Of whom or by whom this way of dealing originated, as though it were done in the name of great tenderness and accuracy, we will not go into. I am certain that its origins are not from God’s Word when we compare Scripture with Scripture, nor was it taught in earlier days by upright instructors and godly persons but is a recent invention.”

As he continues, Comrie then very pointedly makes the observation that experience has taught him among other things that little ones in grace, with this kind of wrong instruction, become torturers of their own souls, suspicious of the good principles of the working of the Spirit, and fellow-laborers of Satan, even to the extent that they view those who want to give them better instruction as persons who daub with untempered mortar (Ezekiel 13:10). He calls those who teach that there is no life prior to the conscious embracing of the Mediator “master-teachers” who lack the true experience of the depths into which poor and miserable souls sink and who also as “masters” know how to speak “from the heights,” year in and year out; they speak about nothing more than the debt which they have made, with which they come to Christ and accept Him, and with this act they now consider themselves complete. This is clear language; we need add nothing to it.

However, there is also a danger from the other side. The question whether it is possible to be born again and not know Christ is solved by others in stating that the knowledge of the Mediator is a great privilege to which only some of God’s children attain in this life. The reader will sense that this is the other extreme. Such views are nourished by a preaching in which man stands at the center with his experiences, his deliverances, and perceptions. There are, regrettably, preachers who can have church services last for two hours without once mentioning the name of Christ. The hearers are then built up with “this must be known,” or “having knowledge of this,” without ever hearing preaching of the holy justice of God, for which alone the pure righteousness of the suretyship of Christ can exist.

We have already stated that both solutions mentioned regarding our question cannot satisfy us, neither the one in which the life of grace first begins with the conscious knowledge of the Mediator nor the other in which the knowledge of Christ is viewed as a kind of spiritual luxury, without which it shall also be well. Thus the question remains: all spiritual life begins with regeneration, and in regeneration man comes to do with God and not with the Mediator, and yet there is no life outside of Christ. Is this not an unsolvable contradiction? We think not. Both matters must be maintained if we wish to at least remain scriptural.

We hope in a second article to consider these matters further.

Is There Spiritual Life Outside of Christ? (2)

Rev. A. Moerkerken, Capelle a/d Ijssel, the Netherlands In our previous article we began to consider how within our congregations, on the one...

Through the whole of Scripture we can find the essence of the words of our topic. These words have always been familiar in our circles. Still it is good, especially for our young people, to repeat...

Rejoicing at the Coming of the Promised Messiah

Confession Full of Joy This chapter is a rich chapter, as Isaiah may see what will happen in the future. The Lord will do great miracles in destroying the enemies an...

Uitgave: Is There Spiritual Life Outside of Christ? (1)