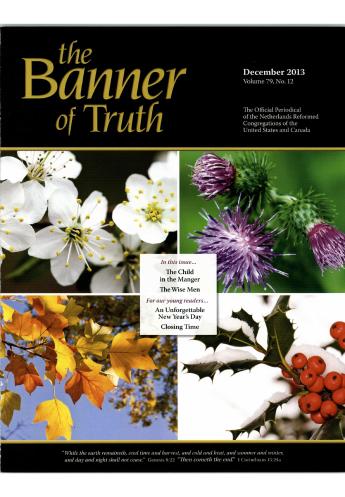 “Now when Jesus was born in Bethlehem of Judea, in the days of Herod the king, behold, there came wise men from the east to Jerusalem, saying, Where is He that is born King of the Jews ? For we... are come to worship Him” (Matthew 2:1&2).

In this portion of Scripture we read of several wise men. How many there were is not told us. The Roman Catholic Church says that there were three because they brought three different kinds of gifts, but in and of itself, that is not a proof. They came from the east, so it is likely that they came from Babylon. In the original languages they are called “Magi.” That does not mean, however, that they were magicians. They belonged to the wise men of the kingdom and were educated in the science of astronomy. It was these people who came to Jerusalem to ask about the King that had been born.

We would not have expected this. Usually, it is not the wise and noble ones who come to ask for Christ. Wisdom and riches frequently cause people to break with God and His service; as a matter of fact, by nature, no one seeks after God and for Christ. These people, therefore, have been made seekers. How God’s free grace shines so brightly in the lives of these men. These heathen are to the shame of the people of Israel and also to our shame. Christ has once said, “I say unto you that many shall come from the east and from the west, and will sit down with Abraham and Jacob in the kingdom of heaven, and the children of the kingdom shall be cast out into outer darkness.” How terrible it will be if publicans and sinners will go before you into the kingdom of heaven.

What was the reason that these wise men had come? From their seeking and from their questions, it appears that they had heard of this King and that they had come to have a need of Him. These people, therefore, lacked something in their lives, and there was no man who could supply for them in their need. Is this not the way God’s saving work begins? When God’s Spirit begins its saving work in us, we learn to know our misery. Then our eyes are opened for our lost state, and there is an empty place in our heart which the entire world cannot fill. In this way, there is born a desire for a Saviour, for one who can make us happy. That was also the case with the wise men. Longingly, they looked for Him who should come to bring salvation for both Jews and Gentiles.

How would they have learned of Israel’s expectation? You must not forget that the people of Israel had been in captivity in Babylon for seventy years. Do you think that the pious ones among them would have remained silent about their expectation of the coming of the Messiah? In addition to that, Daniel was at the court of the King of Babylon. He also was a member of the wise men of Babylon. Daniel has not only spoken of Him but also written about Him in his book, and a large part of his book was written in the language of the wise men, namely, the Chaldean language. Undoubtedly, these wise men have read the words of Daniel with a burning heart. When a sinner is worked upon by the Holy Spirit, God’s Word becomes precious unto him because it speaks of Him whom his soul desires. What is the desire of your heart?

The wise men have looked for the coming of Him who would make their salvation complete. What joy filled their soul when they suddenly saw His star in the sky because that was for them a godly indication that He who was promised had come. That they were certain of it can be seen in their questions. They do not ask, “Has a King been born?” but, “Where is He that was born King of the Jews?” Do you question as to why the Lord used a star to tell these wise men that the Desire of all heathendom has come? Is there anything too wonderful for the Lord? As a matter of fact, the shepherds received the glad message from an angel. When the wise men saw the star and understood its message, they could no longer be held back. Then they said, just like the shepherds, “Let us go to Bethlehem and see that which is come to pass.”

The shepherds did not speak about the angel, and the wise men did not speak about the star. They had only one desire, to meet Him who had been born. Nothing would be too much to satisfy this desire, for they were willing to make a long, dangerous journey to satisfy their wish. They traveled in the direction of Jerusalem, for that is the capital city of Israel, and a king would usually be born in such a place. When they came to Jerusalem, however, they were met with a great disappointment because no one had heard anything of a king who had been born. Would they, then, have made a mistake? Should not God’s chosen people have known of this birth? Oh, what a trial this was for these people.

Is this not also the case with many who are seeking the Lord? Sometimes they attach themselves to pious people who they think can bring them to the right place, but they are disappointed because they do not receive any answers for the many questions which lie in their heart. The wise men, in spite of all the disappointments, do not go back sorrowing. They keep asking and seeking because so much is linked to the coming of this King. Oh, that seeking souls do not give up seeking is God’s work. The Lord Himself will take care that Satan does not triumph over them.

The report of the wise men comes to Herod, and he becomes troubled. Would the Messiah truly have been born? If that is true, his throne is in danger. Perhaps, he can intervene in a timely manner. In this way, the murderous plan that he will soon carry out is born in his heart. This Herod has many soul mates because Zion’s King threatens our own rule. We would prefer to maintain ourselves as long as possible before we are willing to humble ourselves before Him. Happily, God can make friends out of enemies. In the meantime, Herod called the chief priests and the scribes and demanded of them where Christ should be born. They did not have to think a long time about that. Without any hesitation they said unto him, “In Bethlehem.”

Herod’s chief priests and scribes made no effort to go with the wise men. They did not even ask any questions. If the Messiah really had been born, would they not have heard of it? Would the Lord make it known to heathens and not to them? They remained just where the wise men had found them. How many today are the same? They can recite large portions out of God’s Word, and they can state exactly what God’s people experience in the way of conversion, but they do not tremble before God’s majesty, and they do not rejoice in His salvation. Inwardly, they are strangers of what they confess with their mouth. How is it with you? Will the wise men enter before you? They were not satisfied just with hearing and knowing. They wanted to meet Him and see Him, and Herod was used by the Lord to that end, for he showed them the way.

When they again go on their way, they see the star, and they rejoice with great joy. That was no wonder. Would they not have been full of doubts? Would they not have asked each other whether they would ever find Him? Seekers can sometimes be so discouraged, but at the right time the Lord always comforts and encourages them. That is also how it was with the wise men. The Lord showed them, by means of the star, the place where they had to be and how to find what they were seeking. Oh, how much salvation have they then tasted because their eyes were enlightened so that, through the veil of His human nature, they may see His godly glory and majesty. That is why they paid Him godly honor and worshipped Him.

Do you know something of that prayerful adoration? Oh, keep in mind that without a Saviour you can never be saved, and not being saved is to go lost eternally. Pray that the fear of the Lord may lead you to repentance.

Beloved, we have need of a saving work of the Holy Spirit, a discovery of the state of our misery and the necessity of this Jesus shall we ever find rest in Him for our poor soul. When the Word of God, blessed by the Holy Spirit, enters our heart in a saving manner, then we begin to see that we are in a terrible state of misery. When that great change takes place in our life, we begin to see our lost condition, and it fills us with fear on every side because we stand accountable before a holy and righteous God.

It is only the work of the Holy Spirit which drives us to Jesus. Through the enlightening of the Holy Spirit, such souls know what this Person really means. Through the alluring love of God and the discovery of the Holy Spirit there comes a seeking after this precious Person. They learn to know Him in all His necessity as a refuge from all the dangers wherein they find themselves. They see that by Him they are safe from all their enemies and that in His service there is all blessedness and a glorious rest for their soul. See thus, that Christ becomes precious, amiable, suitable, and necessary. They see so much in this Person and in His service, and that people become restless with a strong desire to know Him as their Savior.

Beloved, it is a characteristic of the true rest seekers after this Jesus that they seek the company of those who know Jesus as their Savior. They like to sit with those people at the Lord’s Table so that they may have communion one with another there. That is the desire of their heart. They long to hear God’s people relate how the Lord has led them and how they sought and found this Restgiver, the Mediator.

— Taken from a preparatory sermon by Rev. M. Heerschap

Part IIIt is not God’s usual way to teach His people everything in one day. Certainly, God is free. Saul of Tarsus was privileged to learn much in three days, and with the jailer it took eve...

The Lord builds His church in spite of all opposition and enmity against Him, and it is His work alone, not that of man. This does not mean, however, that we do not have to use the means of grace d...