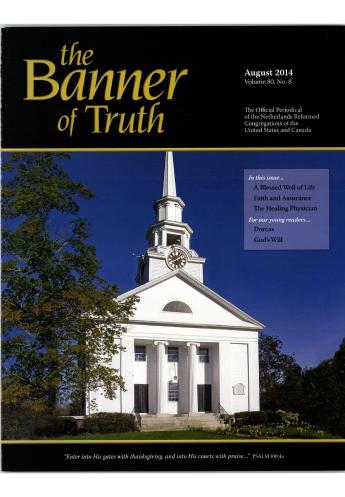 “Return, ye backsliding children, and I will heal your backslidings” (Jeremiah 3:22a).

It is a peculiar name which the Lord uses here to describe the people of Israel. In the word “child” is expressed God’s gracious concern for the people, while with the word “backsliding” the sinful conduct of the people is pictured.

What does backsliding actually mean? Backsliding does not just express that man has turned away from God but also that he has an inward aversion to God. It is because of this inward aversion that man turns away from God. Well, that is what Israel had done. They had departed from the Lord and His service and turned to the idols, in spite of the many blessings which the Lord had granted unto them. How privileged they were above so many others, for the Lord had separated them from all of the people upon the earth so that they would be His people. He made His Covenant of Grace with them and gave them His Word and His law. The poet of Psalm 147 sang of it (in Psalter 402): “His statutes and His judgments He makes His people know; to them as to no others His grace He loves to show.” Instead of fearing the Lord, Israel had given their hearts to the idols; they were backsliding children.

This designation is also true for us. Are we not privileged above so many? Have we not been separated from the world by the mark of baptism? Are we not privileged above the heathen in that we have been made acquainted with the Word of God wherein is declared the only Name which can make us wise to salvation? How much labor of love the Lord has expended upon us where He has offered His salvation and knocked on the door of our heart. Yet, many have backslidden from Him even though they go to church. They do not regard the Lord but kneel before the idols of the world and disregard all of the Lords callings and warnings. Their heart has an aversion to God and His service. They have no desire to fear the Lord. How deeply man has fallen! Created to love God, through sin he has become a hater of God. We are backsliding children. Has the Lord already uncovered you to your condition?

God’s people, upon whom the Lord has shown His love and His grace in a special manner, also have a backsliding heart, for do not suppose that a person only keeps his backsliding heart until the moment that the Lord converts him. Oh no, also God’s children, time and again, turn their back to the Lord. Certainly, it is true, through regenerating grace they have a delight in the law of God according to the inward man, but they also have a law in their members which wars against the law of the mind and brings them into captivity to the law of sin which is in their members. They also have an existence, a nature which is averse to God, and that becomes visible in many ways. What if God’s way is different from their way? What if God’s way is a way of cross bearing? What if the Lord removes a dear child from them? Then flesh roars and strives against that. Then they are not in agreement with God, and their inward backsliding becomes visible.

By nature, we not only have an aversion to God’s leadings but also to discovery. We do not want to be uncovered but to be covered. That is why, in the deepest sense, we have an aversion to grace, for grace is so deeply humbling for a person. We have a loathing for that poor beggar’s life and an inward abhorrence to holding out our hand to live from that which is given. That is because we are lovers of self more than we are lovers of God. In a terrible self-maintaining manner Zion can wander so far away from God that darkness spreads over them, without their realizing it. How dry and lifeless spiritual life can be. It can be so dark that hell does not frighten and heaven does not freshen.

How great is the Lord’s love and grace! In tender mercy He turns Himself to backsliding children. How the riches of the gospel are here unlocked! It is for people who are worthy to be cast away in outer darkness that He spreads open His arms. He turns to those who have turned away from Him. He seeks those who do not seek Him. To us, who are worthy of His wrath, He offers friendship. Must not your heart break when the Lord invites and allures with so much earnestness? If you resist against this, how shall you escape if you do not give regard to such great salvation? “Turn again,” the Lord calls out. The Lord wants you to bow your knees. He wants you to realize your grievous conduct and view it with sorrow. To return is to fall before God’s countenance as a guilty one and to confess that we are worthy of eternal death. No, you do not first have to improve yourself. How much room there is in the administration of the gospel in that the Lord does not call repentant sinners but backsliding ones. The Lord Jesus has not come to call the righteous but sinners to repentance. It is for this reason that no one has to think, “It is not meant for me.”

How is it possible that the Lord will have anything to do with such people? Does not His wrath burn against sin? Oh, if we truly fall down as lost sons and daughters at the feet of the Lord, we learn that secret. Then it is declared unto us that the Lord looks upon us in the blood of His Son. Upon Him has been laid the iniquity of us all, and He has borne the punishment. Upon the cursed wood of the cross He was forsaken of God—God forsaken of God; who can fathom that! He has extinguished the heat of God’s wrath and stilled His anger. Now the Lord can look upon backsliders in the blood of His Son.

Moreover, He imputes unto them the righteousness of His Son, for He was treated as a backslider so that all of the backslidings of a backsliding people would be imputed unto Him. In His greatest suffering He had not turned away from God. For when God forsook Him and turned His back toward Him, He yet held fast onto His God when He called out, “My God, My God, why hast Thou forsaken Me?” That suffering was in a mediatorial way so that those who have left God, those who have forsaken God, those backsliders would be accepted by Him and would never more be forsaken. It is in Christ that the Lord applies healing to backsliders. Is this not a comforting promise for all those who have learned to know the malady of their backsliding heart and who go about bowed down with this malady?

Who can deliver backsliders from their deadly disease? What a wonder that there is One who knows all of their diseases and who can and will heal them. It is He who not only takes away the consequences of the disease but also heals the inner fountain of backsliding.

Who can deliver backsliders from their deadly disease? What a wonder that there is One who knows all of their diseases and who can and will heal them. It is He who not only takes away the consequences of the disease but also heals the inner fountain of backsliding. That is just what His children are so desirous of and where they agree with the poet, “Purge me with hyssop, and I shall be clean: wash me, and I shall be whiter than snow.” It is not dependent upon this or that, but it is because of that filthy fountain of all wickedness that they ask, “Create in me a clean heart, O God; and renew a right spirit within me.” Although their heart is evil, when the blood of the Lamb is sprinkled upon it, they may experience the power of it, for that blood cleanses from all sin. Yea, when they through God’s grace may bask in the rays of the Sun of Righteousness, it becomes true for them that there is healing in His wings. Yet, here upon earth this healing is only experienced in principal. The disease is sometimes nipped in the bud, but it can rise up again in such a measure that it frequently causes sorrow. That causes them to long for the moment when they may be released from this body of death and sin, for then no backsliding will ever trouble them anymore. Then sin will no longer create any separation.

Why does the Lord not give complete healing on this side of the grave? Oh, He is able to do that. The lepers who came to the Lord Jesus were not partially but completely healed so that there was no longer any evidence of the disease. In this manner the Lord could also completely remove and heal backsliding. The Lord, however, does not do that. Why? Because He will teach them to sing of His grace. For this reason it is necessary that they learn subjectively here upon earth how great their sins and miseries are, how they may be delivered from all of their sins and miseries, and how they may show true gratitude to God for this deliverance. In this manner they learn how to bow ever deeper before God, and the administration of Christ becomes ever more precious to them; in this manner they learn to wonder more and more about God’s mercy, love, and faithfulness. In this manner, being saved becomes an ever greater wonder—so great that they shall sing eternally of God’s mercies.

The evil of temptation works for good. A deer being shot with a dart runs the faster for water, and when Satan shoots his fiery darts at the soul, it runs faster to the throne of grace. God can make cross winds to blow His saints nearer heaven.

The Grace of God For Backsliding Children

It is a special name with which the Lord here addresses the people of Israel. In the word “children” is expressed the mercy and grace of the Lord, while in the word “backsliding” sinful departing f...

The Cave of Adullam

With the help of the Lord, we will write something about the cave of Adullam and its inhabitants. In the first place, we find David there, whom we may see as a type of Christ. Secondly, there are t...

Many times we stand around the bedside of one who has come to the end of his earthly journey. The question is often asked, “Did he or she say something in the last moments of life ” Why is this as...

Rev. L. Kieboom (1910-2000) It is a good Christian custom to celebrate Thanksgiving Day, thinking upon material blessings the Lord has given...