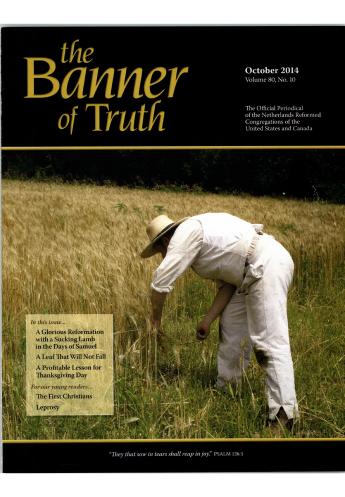 I wish to answer a question pertaining to the administration of baptism to the children of the congregation. When are our children to be baptized?

As we all know, the Roman Catholic Church baptizes its infants as soon as possible after birth. The mother is hardly ever present; neither is baptism administered in the presence of the congregation at its public assemblies. It appears from early baptism records that in the Reformed churches as well, after the 16th century, baptism was administered to infants as soon as possible, oftentimes on the second or third day after birth, at least always within eight days. At the close of the 18th century the custom was changed, and baptism was postponed until the mother could be present also.

In the Netherlands it became a custom in several places to baptize a child the following Sunday if it was born during the week. That custom did not find acceptance in our congregations, but it did in the Reformed Churches which are the counterpart of the Christian Reformed Churches in this country. The reason for that lay in the fact that the new covenant idea was finding wider and wider acceptance.

What is the opinion of our forefathers, and what is our standpoint regarding when infant baptism should be administered? It is this: baptism is a sacrament instituted by God Himself. I have noticed that there are also many in North America, even among those who profess the pure truth in other respects, who reject infant baptism.

They shut their eyes to the fact that baptism is come in the place of circumcision and that infants must be baptized.

Under the Old Testament dispensation children were circumcised the eighth day according to God’s command. That was the day on which it could take place. Mother and child were always considered to be unclean for seven days. As soon as these seven days had passed, the sacrament was administered. It is clear, therefore, that no one in Israel was allowed to do as he pleased. Everyone was to submit unconditionally to the divine command. Transgression of God’s command was severely punished.

Under the New Testament dispensation ceremonial uncleanness no longer exists; consequently, baptism does not have to be administered on the eighth day only. By no stretch of the imagination, however, are we permitted to act according to our own discretion. Those of our forefathers who took part in the Synod of Dordt declared that baptism should be administered as soon as it is feasible to do so. If a congregation has a minister, he should see to it that there is opportunity given at stated intervals so that children may be baptized.

We do not hold that the sacrament is essential to salvation, but this may not contribute to a disregard for the sacrament. We should highly reverence the ordinances of God and must not defer baptism without lawful reasons.

We do not hold that the sacrament is essential to salvation, but this may not contribute to a disregard for the sacrament. We should highly reverence the ordinances of God and must not defer baptism without lawful reasons. For instance, if the mother should be prevented from attending the services due to a prolonged illness, it is incumbent upon the father to present the child for baptism.

When children are born in congregations which have no pastor, the consistory should put forth every effort to obtain the services of a minister either on Sundays or weekdays, in order that infants shall not be deprived of baptism for many months after their birth.

In ordinary circumstances parents are enjoined to be personally present at the baptism of their children. It is proper in every respect that the mother should also be present at baptism in order that together parents may make the vow in the presence of God. This vow is required only from confessing members of the church. We cannot emphasize strongly enough that both husband and wife should be confessing members of the church.

I have noticed that in several of our congregations there are many who defer making public confession of faith until they are married. This is also wrong. It is both desirable and proper for one to become a confessing member before one enters into marriage. It has happened at times that children were a half year old or older before they could be baptized because of the parents’ failure to make confession of faith before their marriage. I hope that, by the Lord’s blessing, the young people amongst us may be convicted by the power of the truth to conduct themselves according to the ways ordained by God before they enter the marriage state. Above all, it is necessary for them to acknowledge the Lord in all their ways.

It is true that, although people marry within the church, great difficulties can still arise which sometimes tend to the great ruin of married life. On the other hand, there are cases in which we are sometimes fearful of the consequences when young people of different church affiliations marry. Oh, how wonderful is the divine management in the affairs of married life, since God accomplishes His purposes in all things! It happens sometimes that those of whom we expect little put to shame those of whom we expect much. Above all, let us put forth every effort to remain with the truth. Divided interests in religious life oftentimes give rise to unpleasant living conditions.

May the Truth be precious to us. Better still, may we be united to it by God’s Spirit. Oh, that the Truth might make us free and that we might walk in the Truth. In keeping God’s commandments there is great reward. May we learn by grace to know the value of the sacrament of baptism and not feel secure merely because our children are baptized. Rather, may they come to the knowledge of the thing signified by baptism, namely, the washing away of sin by the blood and the Spirit of Christ.

And they brought unto Him also infants, that He would touch them: but when His disciples saw it, they rebuked them. But Jesus called them unto Him, and said, Suffer little children to come unto Me, and forbid them not: for of such is the kingdom of God. Verily I say unto you, Whosoever shall not receive the kingdom of God as a little child shall in no wise enter therein.

I wish to answer two questions pertaining to the administration of Holy Baptism to the children of the congregation.The first question is—When are our children to be baptized As we all kno...

(No 53)Grand Rapids, MichiganJune 8, 1948Beloved Congregation:I WISH at this time to answer two questions pertaining to the administration of Holy Baptism to the chi...