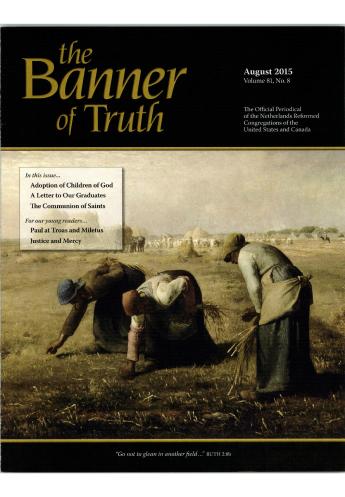 How Many Kinds of Sin Are There?

Our Treasure Book has related to us that there is sin. It has also considered the question what sin really is. Now comes under consideration how many kinds of sin there are. Our Treasure Book divides this into the following segments:

Sin is either original or actual. Original sin makes mankind guilty because of the fall of our first parents. Man has been robbed in his intelligence of both the knowledge of God and the godly will. In man’s heart and will there no longer is the inclination to obey God. In its stead man is inclined to all of the things which God’s law forbids, and he turns himself away from everything that God commands us to do. This sin has corrupted man’s entire nature so that because of this sin, all mankind is guilty of God’s eternal wrath, and they cannot do what pleases God unless this sin is forgiven them by the merits of the Son of God, the Mediator, and their sinful nature is renewed by the Holy Spirit. Actual sins are those sins which we ourselves commit. We sin in words, thoughts, and deeds. We do it outwardly with our bodies. We not only do what God forbids in His law, but we also do not do what the law commands us to do. There are sins of commission and omission.

Sin that is reigning and not reigning

The reigning sin is the sin against which the sinner does not strive by the grace of the Holy Spirit. This sin is not mourned, and it is not resisted against. This sin is not only reigning because a person consents to it and serves it but also because it rules over a person and makes him/her guilty of eternal death. This sin is found in all unconverted people. Some sins can also be found in converted people, such as can be seen in David’s life. They fall into sin against their sense of right and wrong. Hereby, God’s children lose the confidence in the remission of sins and the true comfort as long as they do not reform their lives and convert. The not-reigning sin is the sin which through the grace of the Holy Spirit is striven against. It grieves a person, and he receives grace and forgiveness through Christ. To these sins belong the sins of ignorance, omission, and weakness which remain in the saints as long as they continue in this life. They confess, weep over, hate, and strive against them. They continuously beg for forgiveness. That is why, in spite of the committing of all these sins, they still retain faith and comfort.

The differentiation between deadly and forgivable sins (such as is done in the Roman Catholic Church) is confusing. Every sin, according to its nature, is deadly and deserves to be punished with eternal death. In the regenerated, in and of themselves, deadly sins are forgivable. It does not become a reigning sin. This does not occur because such a sin deserves forgiveness in and of itself, and of itself is not worthy of punishment, but out of grace because of the satisfaction of Christ.

To these last sins belong not only original sin but also many sins of omission, ignorance, and weakness. That is why Paul complains in Romans 7:19 (and what follows), “The good that I would I do not: but the evil which I would not, that I do.” It is here that The Treasure Book speaks of the poignant sin against the Holy Spirit. Because of the many misconceptions about this sin, we will designate a subsequent article to this topic alone.

Sin that is sinper se, and accidental sins

Sin in and of itself is the result of all those sins which are forbidden by God’s law and which will be punished. Sin which is sin by accident includes those works which have been commanded by God and which are done by man but which still displease God. They are done without faith and conversion to God. Therefore, all virtues performed by the unregenerate are accidental sins. They are not performed through faith and are not done to the honor of God. When we read this portion, we may well ask ourselves whether the Lord has ever come into our lives with His commandment. Then sin becomes sin, and guilt becomes guilt. Then even the non-reigning sins are sins before God for which forgiveness in Christ alone becomes necessary.

The Sin Against the Holy Ghost

Rev. D. de Wit, Barneveld, the Netherlands (Fourth of five articles about sin based on The Treasure Book by Zacharias Ursinus)

Rev. D. de Wit, Barneveld, the Netherlands (Second of five articles about sin based on The Treasure Book by Zacharias Ursinus)

The Apostle Paul in 2 Corinthians 7:10 speaks of two kinds of sorrow, namely, a sorrow after a godly sort which works a repentance not to be repented of, and the sorrow of the world which works dea...

Uitgave: How Many Kinds of Sin Are There?