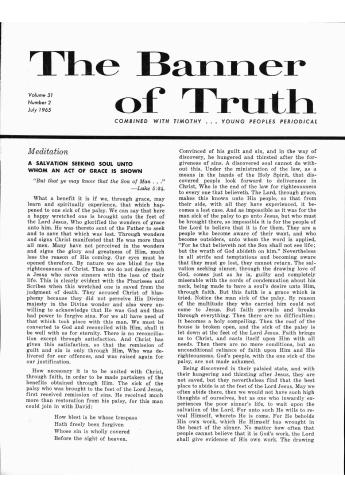 What a benefit it is if we, through grace, may learn and spiritually experience, that which happened to one sick of the palsy. We can say that here a happy wretched one is brought unto the feet of the Lord Jesus, Who glorified the wonders of grace unto him. He was thereto sent of the Father to seek and to save that which was lost. Through wonders and signs Christ manifested that He was more than all men. Many have not perceived in the wonders and signs the glory and greatness of Him, much less the reason of His coming. Our eyes must be opened therefore. By nature we are blind for the righteousness of Christ. Then we do not desire such a Jesus who saves sinners with the loss of their life. This is clearly evident with the Pharisees and Scribes when this wretched one is saved from the judgment of death. They accused Christ of blasphemy because they did not perceive His Divine majesty in the Divine wonder and also were unwilling to acknowledge that He was God and thus had power to forgive sins. For we all have need of that which took place with this man. We must be converted to God and reconciled with Him, shall it be well with us for eternity. There is no reconciliation except through satisfaction. And Christ has given this satisfaction, so that the remission of guilt and sin is only through Him, Who was delivered for our offences, and was raised again for our justification.

How necessary it is to be united with Christ, through faith, in order to be made partakers of the benefits obtained through Him. The sick of the palsy who was brought to the feet of the Lord Jesus, first received remission of sins. He received much more than restoration from his palsy, for this man could join in with David:

How blest is he whose trespass
Hath freely been forgiven
Whose sin is wholly covered
Before the sight of heaven.

Convinced of his guilt and sin, and in the way of discovery, he hungered and thirsted after the forgiveness of sins. A discovered soul cannot do without this. Under the ministration of the law, as a means in the hands of the Holy Spirit, that discovered people look forward to deliverance in Christ, Who is the end of the law for righteousness to every one that believeth. The Lord, through grace, makes this known unto His people, so that from their side, with all they have experienced, it becomes a lost case. And as impossible as it was for the man sick of the palsy to go unto Jesus, but who must be brought there, so impossible it is for the people of the Lord to believe that it is for them. They are a people who become aware of their want, and who become outsiders, unto whom the word is applied, “For he that believeth not the Son shall not see life; but the wrath of God abideth on him.” Nevertheless in all strife and temptations and becoming aware that they must go lost, they cannot return. The salvation seeking sinner, through the drawing love of God, comes just as he is, guilty and completely miserable with the cords of condemnation about his neck, being made to have a soul’s desire unto Him, through faith. But this faith is a grace which is tried. Notice the man sick of the palsy. By reason of the multitude they who carried him could not come to Jesus. But faith prevails and breaks through everything. Then there are no difficulties; it becomes a holy compelling. Then the roof of the house is broken open, and the sick of the palsy is let down at the feet of the Lord Jesus. Faith brings us to Christ, and casts itself upon Him with all needs. Then there are no more conditions, but an unconditional reliance of faith upon Him and His righteousness. God’s people, with the one sick of the palsy, are not made ashamed.

Being discovered in their palsied state, and with their hungering and thirsting after Jesus, they are not saved, but they nevertheless find that the best place to abide is at the feet of the Lord Jesus. May we often abide there, then we would not have such high thoughts of ourselves, but as one who inwardly experiences the poor sinner’s life, to wait upon the salvation of the Lord. For unto such He wills to reveal Himself, whereto He is come. For He beholds His own work, which He Himself has wrought in the heart of the sinner. No matter how often that people cannot believe that it is God’s work, the Lord shall give evidence of His own work. The drawing love of God brings that people with their guilt and sin at His feet. There the mystery of redemption is understood and revealed.

There is only one name given under heaven whereby we must be saved. Never can it be expressed what it is when Christ has compassion upon the miserable sinner who has forefeited all, where it becomes, from our side, an impossible and completely hopeless and lost case when His eternal riches are magnified and applied, to receive, through His sacrifice, the remission of all our sins. Then salvation becomes so great and broad, that they can concur with Paul, and exlaim “I, the chief of sinners obtained mercy.” The grace and love which God bestows upon His people, then becomes a granted benefit.

They desire that great good for their greatest enemy, while they themselves as enemies are reconciled to God. How different it would be in God’s church, in our sad days of estrangement, if we, with the sick of the palsy, might be privileged to experimentally take that place. Then more breaking through work would be perceived and heard of, whereas we now so often remain in the childbirth, and seek our ground in the benefits and in our feelings. It seems as if we can be saved without Jesus, and there is no growth in grace and in the knowledge of Him. We must continually implore the ministration of God’s Spirit, that we may examine and investigate whether God’s work is magnified in us, for there can be no rest outside of Christ.

God’s people can see much in Him, and may exclaim with Peter: “Thou art the Christ the Son of the living God,” but still miss Him in the appropriation of faith as their Surety and Mediator. Thus they miss the immediate liberation, but receive a right to eternal life, although the Lord is free in the application of this matter; but the truly concerned people of God look forward to the liberation. And He which hath begun a good work in them will perform it until the day of Jesus Christ.

The man sick of the palsy and the salvation seeking people may, through God’s grace, experience this. The Lord said to Him “I say unto thee, Arise and take up thy couch, and go into thine house.” Two benefits are glorified unto this man, the forgiveness of sins and the restoration from his palsy, and he could return free into his house.

Now God’s people in regeneration are, from God’s side, brought into the state of reconciliation and are declared free in Christ. But the application and appropriation of faith is continually necessary for the salvation seeking one, in order to stand fast in the liberty wherewith Christ has made them free. Now this can be enjoyed in the condition of our life, under the covering righteousness of Christ. Then the guilt lies covered. But in the state of our life this occurs in the Tribunal of God’s judgment, cut off from everything, and then as a lost sinner be acquitted from guilt and sin and to receive, through the Judge upon the ground of Christ’s merits, a right unto eternal life. Free of guilt and sin, restored unto the Father, through Christ, reconciled with a Triune God, to extol and praise Him with the Psalmist: “The Lord sustains thee and has dealt, most graciously with thee,” This people, in the exercise of faith, become a dependent people, who daily must live from that which is granted.

Grace does not make great people, for they cannot live of their justification. For they” also must continually be brought to the feet of the Lord Jesus, to be ministered unto, through and out of Him. Then we do not look down upon the concerned church, but there we meet each other in the Lord and at the throne of grace. We are sometimes so rich with our experiences, that we see no value in the Surety work of Christ. Then we are great converted people, dry and barren, with no more scent or taste than emanates from God’s people. May the want of Him yet be bound upon us, and become a binding matter in our life. May the north wind of the Spirit blow upon the garden of His church, that there may yet be found many sick of the palsy, then the Lord can do wonders to manifest His guilt-forgiving love, and to cause those sick of the palsy to walk in liberty, who then will not be silent about the good which the Lord has done. But they will praise Him in their life, and sing Psalms unto God while they yet live. One day they will go home eternally, with the one sick of the palsy, where there shall be no more palsy. There they will be privileged to eternally sing the song of the redeemed, Thou hast redeemed us to God by thy blood. Amen.

What Is Pure and True Gratitude?

Christ’s Precious Promise to His Disciples

Rev. J. den Hoed, Franklin Lakes, NJ The time has now come when the Mediator between a Holy God and a deeply fallen sinner will return to the...

The Man with a Palsy

The Lord remembers His covenant from generation to generation. That is the hope for the church, also for our children. He uses marriage for the accomplishment of His will and the fulfillment of His...

Uitgave: A SALVATION SEEKING SOUL UNTO WHOM AN ACT OF GRACE IS SHOWN