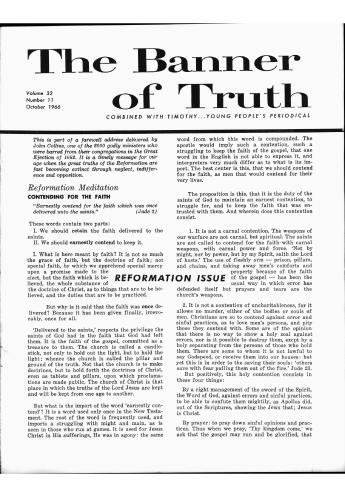 The Legacy of John Calvin

“On this day, with the setting sun, the brightest light in the world and he who had been the strength of the Church was taken back to heaven.” So wrote Theodore Beza of the passing of John Calvin four hundred years ago, on May 27, 1564

Who was this man who, though one of the greatest men of his age, was buried, in accordance with his own express desire, without any outward ceremonial in a grave unmarked by tombstone or epitaph? Some have made him out to be a monster and a tyrant, a hater of his fellow men and a per-yerter of the truth — so much so that still today in certain religious circles his name is regarded with abhorrence. This judgment of Calvin cannot be reconciled with the facts of history, and it is a cause for satisfaction that our own age is increasingly coming to a more just appreciation of the true worth of this remarkable man.

Calvin was not the ruthless dictator of religion and morals of the republic of Geneva. The faith of the Reformation and a strict moral code had been formally adopted by civic rulers and people before Calvin arrived in their city; nor was it of his own will and design that he settled in their midst. In 1536, Calvin, then a young man of twenty-seven, spent a single night in Geneva en route to Strasbourg. He had no thought of lingering in Geneva, let alone spending the rest of his life there. Indeed, his clear ambition was to pass his days in scholarly retirement, untroubled by the problems that beset the man who is a public figure, writing the books he felt it was God’s will for him to write. But the fiery William Farel, to whom Calvin’s presence in Geneva had been reported, had other ideas. He sought out the young scholar in his inn and, when pleadings proved fruitless, uttered an imprecation that God would curse his scholarly retirement if he refused to stay and labor in Geneva, where his help was much needed. In this way Calvin’s purpose was turned, and he became bound to the city and people of Geneva.

But he never ceased to long for release from the demands and controversies of public life, though there was never anything prefunctory about his self-giving. “The welfare of this church,” he said of Geneva, “lay so near to my heart that for its sake I would not have hesitated to lay down my life.” In this spirit he served it, working incessantly for its well-being and progress, a natural leader because of his phenomenal powers of personality and intellect. Despite the handicap of physical frailty and almost unremitting ill health, he never spared himself but gave himself freely and fully to the service of God and his fellow men.

Calvin’s life is one of the oustanding examples in church history of the strength of God being made perfect through weakness. Each day of every other week he preached in Saint Pierre, and three times a week he lectured in theology. Far from abandoning his literary projects, he labored constantly with his pen, preparing his commentaries on the books of Holy Scripture, composing handbooks on Christian doctrine and treatises on important theological issues that were before the Church, and revising his Institutes. His other activities included corresponding with a host of persons of both noble and humble birth, known and unknown to him, in many lands; visiting the sick and those in trouble; making himself available to the stream of callers from far and near who sought him out; giving himself in wholehearted fellowship to his friends; instructing the clergy; guiding the affairs of the consistory; and willingly, when requested (remember that he had had a brilliant career in the law school of Paris prior to his conversion), allowing the civic leaders to benefit from the wisdom of his counsel — though, because of his clear conception of the distinct spheres of jurisdiction of church and state, he always did this in his capacity as a private person. Incidentally, some may be surprised to learn that this supposed tyrant did not even enjoy the privilege of citizenship during the greater part of his life in Geneva; this was not conferred on him until 1559, some five years before his death. Not only was his manner of living always unpretentious and frugal, but his whole life was one of single-minded devotion to the cause of Christ. At a time when he was severely weakened by sickness his friends pleaded with him to relax his labors and spare himself, but he replied: “What, would you have the Lord find me idle?”

Calvin’s compassion is seen in his tender devotion to his wife and his grief at her death in 1549, after ten years of happy married life together during which they had had the sorrow of burying their infant son; in his spontaneous love for his friends; and in his touching concern for fellow Christians who were suffering persecution for their faith in various places. At the same time, the forcefulness of his character is seen in his inflexibility of purpose when he discerned that the truth of the Gospel was at stake. He would rather die than dishonor Christ by compromising his Gospel. He hated controversy, but it was only God, never man, whom he feared. The extreme logic of his mind led him at times to decisions and formulations that we might consider unduly harsh or rigorous, though we must beware of tearing him out of the context of his age. But the record of his achievement, as also of his personality, is there for all to study, and there can be only one verdict: that intellectually, spiritually, morally, and magisterially John Calvin has his place among the preeminent geniuses of the whole Christian era. And his influence did not die with him; on the contrary, it is greater today than it has ever been and shows every sign of becoming greater still.

There is something else to be said about this amazing man. Although his name is indelibly associated with the city of Geneva, his interest was by no means confined to the territory of Geneva. It is probably not generally realized to what an extent the Geneva of Calvin’s day was the hub of a wheel from which radiated the spokes of missionary activity. One of the outstanding characteristics of the Genevan church under Calvin was precisely its missionary-mindedness. This fact alone should silence the glib and oft-repeated assertion that Calvin’s theology spells death to evangelism and missionary activity. Geneva, it is true, became a refuge for many who were fleeing from the terrors of persecution, and this influx was a source of strength and enrichment to the church there. But that church was not content merely to receive and give shelter; it was intent on the advancment of the Gospel in territories far beyond its own limits. Accordingly, suitable men were constantly prepared for this vital ministry and sent out to preach and to teach the doctrine of Jesus Christ.

The men sent out were tried and trusted, and they were men of vision and courage; for this was no simple operation that they were undertaking, but one of the greatest hazardousness. The enemies of the Reformation were ruthless, and discovery might well mean (and in numerous cases did mean) torture and death. Not surprisingly, then, these messengers of the Gospel were sent out in secret, often covered by the cloak of an assumed name. On reaching their destination, after a journey by dangerous mountain tracks across the Alps, they ministered to those whom they could muster behind closed doors or in the shadows of the woods. The mission field to which these men were sent out comprised, in the main, France and Northern Italy; but in 1561 two pastors were sent as far afield as Brazil to serve among the members of a French expedition and to bring the Good News to the South American Indians. Thus year after year men were sent out from Geneva with their Bibles and their doctrine. The number of missions reached a peak of some 150 in 1561 — a remarkable testimony to the outward looking, unselfish effect of Calvin’s theology when it is properly understood.

John Calvin has much to say to us today. There is first of all the theological legacy he left us, which, thanks to the enterprise of publishers and translators, is readily accessible to all who wish to study it. Foremost in this is his Institutes of the Christian Religion, the finest systematic presentation of biblical theology in the history of the Christian Church. As for his commentaries on Holy Scripture, these should certainly not be neglected, 400 years old though they are; for they and the Institutes were intended to supplement each other, and with their sane explanation of the natural sense of the sacred text they form a landmark in the history of exposition. His other writings, too, will be found to be full of treasures. Though his writings, then, Calvin speaks to us and instructs us.

But again, the whole of Calvin’s life speaks powerfully to us today. How can we fail to be challenged by such a man? Indeed, a consideration of his life is likely not only to challenge us but also to cause us to blush with shame, for his ardor, his dedication, his singleness of purpose, which we regard as so phenomenal, should surely be characteristic of every follower of the Master. Calvin shows us what God can do with a single, frail servant who is willing to put aside personal preferences; to abandon the shelter of religious respectability; to go, if need be, against the ecclesiastical tide; to denounce error; to proclaim the truth without apology and without ambiguity; to labor ceaselessly for Christ’s cause, regardless of personal cost; and to have but one ambition: the glory of God.

And Calvin challenges the Church of our day to repent of its introversion and to cease “playing it safe”; to return to its missionary task, which after all is its main task both at home and abroad; to be not merely a haven but also, in the power of the Holy Spirit, a dynamic force penetrating with the message of life to the uttermost parts of the earth.

Finally, John Calvin says to us all as we lounge in the luxury of complacency and unconcern: “What, would you have the Lord find you idle?”

Calvin had promised to help Farel in the work of the Lord which had to be performed in Geneva. From that moment on, Calvin felt bound to the people of that great city. He knew that God had called h...

The Institution of Eldership and Its Task (2)

Calvin was the last of the great Reformers. He absorbed and meditated over all that had been said by Luther, Melanchthon, Zwingli, Bucer, and Farel. From the very beginning, Calvin was in agreement...

July 10, 1959, it has been 450 years ago since the reformer Calvin was born. Many columns have been written in Christian papers about this great reformer Calvin, but who often confessed with Abraha...

Calvin yet had to fight many battles before the opposition was conquered, but he finally succeeded in the strength of his God. Geneva truly became the model city of Protestant Christendom. That lif...

Rev. A. Moerkerken, Capelle a/d Ijssel, the Netherlands (The following was an address given by Rev. Moerkerken at the conclusion of a course i...

Uitgave: The Legacy of John Calvin