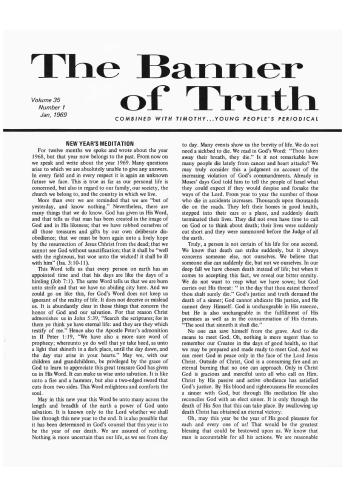 Mrs. C. presented me in your name the brethren’s daily words for the New Year: for which I thank you, and through it, may be often put in good remembrance of you and yours this year. In return, I send you my word.

MESSIAH is one of the high titles of the Redeemer, which interpreted in the Greek, is, the Christ, and in the English, the Anointed. Oil was the instituted emblem of the grace of the holy Spirit, and anointing with oil was the outward and visible sign of his inward and spiritual grace. We meet with the institution, Exodus 30:22 to the end. This holy ointment was to be used in consecrating the tabernacle and all its vessels, and in setting apart certain persons for some great offices. It was unlawful to use it upon any other occasion — whosoever did, was to be cut off from the people.

This consecrating unction was used on the tabernacle, which was a type of the body of Christ, and on every vessel of the tabernacle, to shew that Christ, and everything of Christ, was under the sanctifying influence of the holy Spirit, and it was used to set apart the Prophet, Priest, and King, because he was to sustain those offices. He was the anointed Saviour. His human nature was conceived and formed by the Holy Ghost. Every thought of his mind, every motion of his body was under influence, and that every moment: for he had the Spirit without measure.

He had infinite grace to obey, to suffer, to conquer. Nothing could possibly be wanting to render his obedience, sufferings, and victories absolutely complete and everlastingly perfect. We have a demonstration of their full value and acceptance. He died: but rose from the dead. He sits at the right hand of the majesty on high, infinitely replenished with the graces and gifts of the eternal Spirit: yea, in him dwells the fulness of the Godhead bodily.

Here is the fountain of all blessings. His name shows not only that he is thus anointed; but means one who has the power to give the unction of the Holy One. He, as head, has it for his members, which is beautifully described, Psalm 133. The precious ointment poured upon the head of the high priest, flowed down to the skirts of his garments: so does the spiritual anointing. On Christ it was poured without measure. From him it descends to the lowest member. Every believer has his share of its divine influence. The Spirit of Christ is given to quicken the dead. He unites the soul to Christ. He enables it to live by faith upon Christ. And to live to the glory of Christ.

And therefore this anointing is absolutely necessary; Without it, no man can be a member of Christ: for if any man have not the Spirit of Christ, he is none of his. A Christian means one who has received the unction from Christ. The same spirit which is in the head, is also in the member: for he that is joined to the Lord, is one spirit, and is as intimately united, yea, I think more, than the body and soul in one person.

This constitutes the Christian. He has actually the Spirit of Christ; whereby he is one with Christ, and Christ with him. Christ dwelleth in him, and he in Christ: or, as the apostle expresses it — I am crucified with Christ, nevertheless, I live, yet not I, but Christ liveth in me. Christ was his life, as truly as any member lives by its union with the head, as evidently as a branch is nourished by the sap received from the stock upon which it grows.

The anointing which he receives from Christ, makes and constitutes him a real Christian, as certainly as the member lives by its oneness with the head, or the branch with the vine. Our Lord’s name the Messiah, leads us to consider him in this view, not only anointed himself, but also the giver of the same grace, he having received it on purpose that he might give it to his people. By his own command, it was first used at Antioch, and it has been ever since the peculiar title of those who profess faith in him, and influence from him.

Many indeed have the name without the thing. As a man may be called rich who is very poor. But such are not Christians. They have a name to live, while they are dead. But he who is truly so called, has actual fellowship with Christ by his Spirit. What was on Christ without measure, is on him according to the measure of the gift of Christ. He partakes of the divine anointing. He is called after Christ, a Christian: for he is made alive, and lives, and acts, by the same Spirit that is in Christ, “who is head over all things to his church, which is his body, the fulness of him that filleth all in all.”

But, if it be thus certain, that the head and the members have the same unction, how can any one know it? Should it not be very clear, as it is the thing which makes the Christian? Certainly it should. And the scripture leaves no doubt concerning the way and means in which it is to be known.

Known by believing; “Ye have an unction from the holy one, and ye know all things. The word is the ministration of the Spirit. We are begotten by it, nourished by it: holding the truth in love, we grow up into Christ in all things.

How is this unction enjoyed? In the same way as known. The influence of the Spirit of Christ keeps up through through faith communion with the head and members, testifying of Christ, glorifying of Christ.

How is it improved? By daily use we get more faith, more hope, more love to Christ; more happiness in the Father’s love in Christ, whereby we learn more subjection to his will and ways.

In this new year, I wish you new grace, fresh unction, yea, may you be every day anointed with fresh oil — much fellowship with him. Your guide — your keeper — your Saviour. I have only time to pray for you and yours.

(Continued from last issue)HOW the manhood was taken into God, surpasses the investigation and capacity of created intellect. Nor is the explanation of this conjunction needful to his people...

The Heidelberg Catechism in Questions and Answers (8)

In the second article of the Twelve Articles there is the name Jesus, but also the name Christ. Christ means anointed, and th...

Christ: The Anointed One