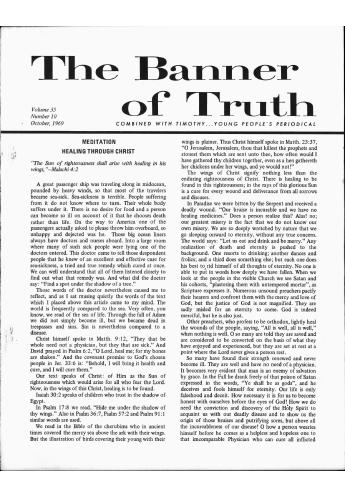 Whence, then, is it to come? How does he get it?

It can only come from God; and it is in knowing God that he gets it. God has written a Volume for the purpose of making Himself known; and it is in this revelation of His character that the sinner is to find the rest that he is seeking. God Himself is the fountain-head of our peace; His revealed truth is the channel through which this peace finds its way to us; and His Holy Spirit is the great Interpreter of that truth to us. “‘Acquaint thyself now with God, and be at peace” (Job 22:21). Yes; acquaintanceship with God is peace!

Had God told us that He was not gracious, that He took no interest in our welfare, and that He had no intention of pardoning us, we could have had no peace and no hope. In that case our knowing God would only make us miserable. Our situation would be like that of the devils, who ‘believe and tremble’ (James 2:19); and the more that we knew of such a God, we should tremble the more. For how fearful a thing must it be to have the great God that made us, the great Father of spirits, against us, not for us!

Strange to say, this is the very state of disquietude in which we find many, who yet profess to believe in a God ‘merciful and gracious!’ With the Bible in their hands, and the cross before their eyes, they wander on in a state of darkness and fear, just such as would have arisen had God revealed himself in hatred, not in love. They seem to believe the very opposite of what the Bible teaches us concerning God; and to attach a meaning to the cross the reverse of what the gospel affirms it really bears. Had God been all frowns, and the Bible all terrors, and Christ all sternness, these men could not have been in a more troubled and uncertain state than that in which they are.

How is this? Have they not misunderstood the Bible? Have they not mistaken the character of God, looking on Him as an ‘austere man’ and a “hard master”? Are they not laboring to supplement the grace of God by something on their part, as if they believed that this grace was not sufficient to meet their case, until they had attracted it to themselves by some earnest performances, or gloomy experiences, or alarming convictions, or spiritual exercises, of their own?

God has declared himself to be gracious. “God is love.’ He has embodied this grace in the person and work of His beloved Son. He has told us that this grace is for the ungodly, the unholy, the rebellious, the dead in sin. The more, then, that we know of this God and of His grace, the more will His peace fill us. Nor will the greatness of our sins, and the hardness of our hearts, or the changeableness of our feelings, discourage or disquiet, however much they may humble us, and make us dissatisfied with ourselves.

Let us study the character of God: holy, yet loving; the love not interfering with the holiness, nor the holiness with the love; absolutely sovereign, yet infinitely gracious — the sovereignty not limiting the grace, nor the grace relaxing the sovereignty; drawing the unwilling, yet not hindering the willing, if any such there be; quickening whom He will, yet having no pleasure in the death of the wicked; compelling some to come in, yet freely inviting all! Let us look at Him in the face of Jesus Christ; for He is the express image of His person, and he that has seen Him has seen the Father. The knowledge of that gracious character, as interpreted by the cross of Christ, is the true remedy for our disquietudes.

Insufficient acquaintanceship with God lies at the root of our fears and gloom. I know that flesh and blood cannot reveal God to you, and that the Holy Spirit alone can enable you to know either the Father or the Son. But I would not have you for a moment suppose that the Spirit is reluctant to do His work in you; nor would I encourage you in the awful thought that you are willing, while He is unwilling; or that the sovereignty of God is a hindrance to the sinner, and a restraint of the Spirit. The whole Bible takes for granted that all this is absolutely impossible. Never can the great truths of divine sovereignty and the Spirit s work land us, as some seem to think they may do, in such a conflict between a willing sinner and an unwilling God.

The whole Bible is so written by the Spirit, and the gospel was so preached by the apostles, as never to raise the question of God’s willingness, nor to lead to the remotest suspicion of His readiness to furnish the sinner with all needed aid. Hence the great truths of God’s eternal election, and Christ’s redemption of His Church, as we read them in the Bible, are helps and encouragements to the soul. But, interpreted as they are by many, they seem barrier-walls, not ladders for scaling the great barrier-walls of man’s unwillingness; and anxious souls become landlocked in metaphysical questions and self-righteous perplexities, out of which there can be no way of extrication, save that of taking God at His word.

In the Bible God has revealed Himself. In Christ He has done so most expressively. He has done so, that there might be no mistake as to His character on the part of man.

To know His character, as thus interpreted to us by Jesus and His cross, is to have peace. It is into this knowledge of the Father that the Holy Spirit leads the soul whom He is conducting, by His almighty power, from darkness to light. For, everything that we know of God we owe to this divine Teacher, this Interpreter. But never let the sinner imagine that he is more willing to learn than the Spirit is to teach. Never let him say to himself, ‘I would know God, but I cannot of myself, and the Spirit will not teach me’.

It is not enough for us to say to a dispirited person, ‘It is your unbelief that is keeping you wretched; only believe, and all is well”. This is true, but it is only general truth, which in many cases is of no use, because it does not show him how it applies to him. On this point he is often at fault, thinking that faith is some great work to be done, which he is to labor at with all his might, praying all the while to God to help him in doing this great work; and that unbelief is some evil principle requiring to be uprooted, before the gospel will be of any use to him.

But what is the real meaning of this faith and this unbelief?

All such efforts spring from thinking well of himself in some measure; and also from his thinking evil of God, as if He would not receive him as he is. If he knew himself as God does, he would no more resort to such efforts than he would think of walking up an Alpine precipice. How difficult it is to make man think of himself as God does! What but the almightiness of the divine Spirit can accomplish this?

If not, where is his good opinion of God? Surely the knowledge of God, which the cross supplies, ought to set all doubt aside, and make distrust appear in the most odious of aspects, as a wretched misrepresentation of God’s character and a slander upon His gracious name.

Unbelief is thus the belief of a lie and the rejection of the truth. It obliterates from the cross the gracious name of God, and inscribes another name, that of an unknown god, in which there is no peace for the sinner, no rest for the weary.

Accept, then, the character of God as given in the gospel; read aright His blessed name as it is written upon the cross; take the simple interpretation given of His mind toward the ungodly, as you have it, at length, in the glad tidings of peace. Is not that enough? If that which God has made known of Himself be not enough to allay your fears, nothing else will. The Holy Spirit will not give you peace, irrespective of your views of God’s character. That would be countenancing the worship of a false god, instead of the true God revealed in the Bible. It is in connection with the truth concerning the true God, “the God of all grace”, that the Spirit gives peace. It is the love of the true God that He sheds abroad in the heart.

The object of the Spirit’s work is to make us acquainted with the true Jehovah; that in Him we may rest; not to produce in us certain feelings, the consciousness of which will make us think better of ourselves, and give us confidence toward God. That which He shows us of ourselves is only evil; that which He shows us of God is only good. He does not enable us to feel or to believe, in order that we may be comforted by our feeling or our faith. Even when working in us most powerfully, He turns our eye away from His own work in us, to fix it on God, and His love in Chnst Jesus our Lord. The substance of the gospel is the name of the great Jehovah, unfolded in and by Jesus Christ; the character of Him in whom we ‘live and move and have our being”, as the “just God, and the Saviour”, the justifier of the ungodly.

Turn your eye to the cross and see these two things — the crucifiers and the Crucified. See the crucifiers, the haters of God and of His Son. They are yourself. Read in them your own character, and cease to think of making that a ground of peace. See the Crucified. It is God Himself; incarnate love. It is He who made you, God manifest in flesh, suffering, dying for the ungodly. Can you suspect His grace? Can you cherish evil thoughts of Him? Can you ask anything further, to awaken in you the fullest and most unreserved confidence? Will you misinterpret that agony and death, by saying either that they do not mean grace, or that the grace which they mean is not for you? Call to mind that which is written — “Hereby perceive we the love of God, that he laid down his life for us” (1 John 3:16). ‘Herein is love, not that we loved God, but that he loved us, and sent his Son to be the propitiation for our sins’ (1 John 4:10).

Go on in the strength of the Lord, and put Christ’s love to the trial, and put upon it burdens, and then it will appear love indeed, We employ not His love, and therefore we know it not.

2. MAN’S OWN CHARACTER NO GROUND OF PEACE If God testifies against us, who can testify for us If God’s opinion of...

The Belgic Confession of Faith (3)

We have written the last time that the Lord reveals Himself in two ways. He has two books of instruction: a) the book of nature which reveals something of the majesty, the greatness, the glory, the...

Rev. P. Van Ruitenburg, Chilliwack, BC Grace Be unto You “Grace be unto you, and peace, from Him which is, and w...

Rev. J.C. Weststrate (1919-1998) These are words from the sermon preached by Peter in Jerusalem at Pentecost, and they testify both of Ascens...

The Salutation of the Risen Christ

Rev. J.C. Weststrate (1919-1998) We were privileged to commemorate the resurrection of the Savior on Easter Sunday, but now the great questio...