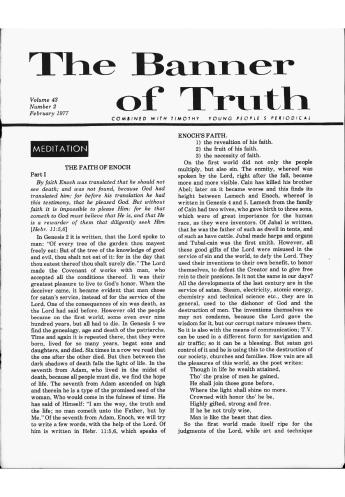 JAMES ARMINIUS OR FALSE TO HIS TRUST

Part II (continued from November 1976 issue of the Banner of Truth.)

What then is Arminianism? As Arminius himself first puts it in 1604, it sounds very innocent. “God, being a righteous judge and kind father,” he says, “had, from the beginning, made a distinction between the individuals of a fallen race, according to which He would remit the sins of those who should give them up, and put their trust in Christ, and would bestow on them eternal life; also that it is agreeable to God, that all men be converted, and, having come to the knowledge of the truth, remain therein, but He compels no one.”

This sounds plausible and innocent until you put beside it the clear statement of the fact. God, from eternity, from a fallen, lost race, hath chosen some to salvation. From this it comes about that these are drawn to faith and piety, and by God’s grace preserved. The remainder of the human race are left in their original and natural condition of depravity—go on to sin and die in condemnation.

Take the Arminian statement and pull it to pieces. It is based on Free Will and no Fall.

Man can determine himself either way as he likes. God forseeing this, decrees that those who choose holiness shall be saved, and that those who do not shall be lost. In other words, God has nothing to do with salvation except to register human decisions as they occur. He does not know who, or not, will be saved, but waits on the after event for information, and to gather up whatever control of the creature He may.

Calvinism denies this statement at its every point.

Man is fallen. A sunken creature, he is still sinking by his own weight. His tendency is down. He is a stone which has dropped from a steeple, and cannot lift itself up. He is water running downhill, which cannot flow back.

He cannot, therefore, determine himself in the upward direction toward God, but is dead to holmess and dead in sin. God, therefore, must come in to quicken. “You hath He quickened who were dead in trespasses and sins.”

How many God will quicken, awaken and draw to Himself, God must determine. The choice is His. He must choose. Yea, He has chosen already, and from eternity foreknows His people whom he has ordained.

Calvinism, in experience, is based on new birth. This is an argument which does not weigh with the Arminian because he has no new birth.

If you try to describe a sapodillo to one who never tasted, never saw the fruit, you leave no impression.

By and by someone else comes along and denies that sapodillos are sweet, or that there is such a fruit. Your man does not know. He does not care. He cannot. He has no interest.

But here is another. He comes from the West Indies. He has eaten sapodillos all his life—and seen them grow.

You mention sapodillos, and this Cuban cries, “I know that fruit. It is sweet like honey and round and breaks into three segments—a black seed in each segment. Oh, I have eaten them 10,000 times.” If any one denies these things he will contend it.

Our arguments from the new birth seem light and empty to a natural man. He runs right back to choices. “I chose,” or “did not choose.” “I” “I,” his religion is “I”.

But here is another who has had another experience. He chose and chose, and still remained what he was. He resolved and resolved and broke down. He turned over a new leaf, and lo! it was the old leaf blotted. Then God came in and touched on his life. Something moved him, he hardly knew what, and infused a new spirit within him. And now, this second man cries, “God! God!” His religion in interposition. God came in and God made me willing. God chose; “Salvation is of the Lord.”

This thing is to the Jew a stumbling block—to the Greek foolishness. It must be. These men—the Jew, the ritualist, the Greek, the intellectual thinker — never experienced it. They never got beyond opinions, sentiment, endeavours, ceremonies of the church—a few resolutions and tears.

What do they know of a mystery—an inward revelation of Christ—a true revolution of nature? How can they ascribe all the glory to God? It is absurd even to think it.

The Arminian denies that God might justly pass by our guilty lost race, as He did pass by angels. He denies that in fact, God passes by any. He holds that the same chance is given to all—the same appliances—the same gracious assistance and the same power. If not, he cries “Unfair!”

Whoever wills then, originiates, over and above these things common to all, his own act. He distinguishes himself, and makes himself to differ. He saves his own self and owes to God nothing which God did not owe him before.

“God, if He let the race fall, was bound,” says the Arminian, to “provide a Saviour for the fallen. He was also bound to give an equal grace to all, that all may get hold of that Saviour. If all have an equal grace, then those who USE it, make themselves to differ.”

That flatly contradicts St. Paul, (I Cor. 4:7 - “For who maketh thee to differ from another? and what hast thou that thou didst not receive? Now if thou didst receive it, why dost thou glory, as if thou hadst not received it?”) reverses the whole Bible, and, to His face, withstands Almighty God.

Article 16 This article speaks to us of eternal election. In fact, it speaks of election and reprobation. It speaks of predestination, which implies the gracious ele...

One day several years ago, the surveyor was working on our street, checking the property lines of vacant lots where new houses were to be built. I noticed that he was very careful about placing his...

But there is also a justification at the last day, at the Judgment Day. That is the public justification. Then the Lord will publicly confirm His own work and publicly declare His people just and b...

Parable of the Prodigal Son (4)

Last month we saw the prodigal son at the swine trough, kneeling among the swine and seeking to fill his stomach with their food. However, we see a turning in his life. We must say that it was not...

What If I Am Not Elected?

Have you ever been plagued with this question Is it perhaps precisely when you are on your knees, begging the Lord to have mercy on you; when you are diligently using the means of grace; when in...

Uitgave: JAMES ARMINIUS OR FALSE TO HIS TRUST