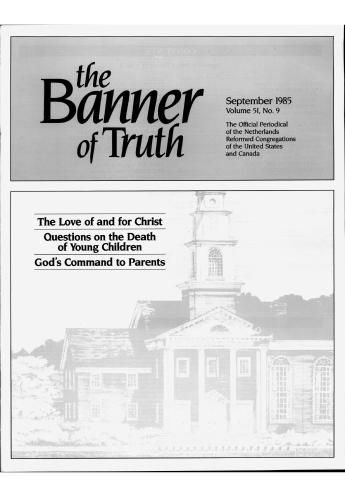 The theme of this letter is an attractive one to some people. The name of it is salvation. It has an invincible attraction to people who are led to see that it is a relative term, that it relates to the condition they are taught to know they are in. They are ruined, lost, hopeless and helpless in themselves. Then they are led by the Spirit of Christ to see the Savior of sinners. Of the Virgin Mary the angel of the Lord said: “And she shall bring forth a Son, and thou shalt call His Name JESUS: for He shall save His people from their sins” (Matt. 1:21). Thus you will see that salvation is a relative term. It is connected with the terrible state of mankind as lying in wickedness, as transgressors of God’s holy law. In no way but that which God planned, could salvation be brought to His people: viz., by the gift of His Son, the sending of Him into this world that they might live through Him (I John 4:9). Salvation is the saving from sin. Salvation from sin in the guilt of it. This could only be by the death of the Lord Jesus Christ, the only-begotten Son of God. “But when the fulness of the time was come, God sent forth His Son, made of a woman, made under the law, to redeem them that were under the law, that we might receive the adoption of sons” (Gal. 4:4,5). This was the only way by which the guilt of sin could be removed from God’s people.

It follows of a gracious and just necessity that the people whose guilt the Lord of glory removed by death should be born again, have a new heart given to them, new eyes and new ears.

The second thing in salvation, is salvation from the power and pollution of sin. “By nature we are all dead in trespasses and sins, wherein we walk according to the course of this world, according to the prince of the power of the air.” This is a terrible state; the power, the dominion of sin no man can break. It follows of a gracious and just necessity that the people whose guilt the Lord of glory removed by death should be born again, have a new heart given to them, new eyes and new ears. Now is sin seen, felt, and mourned over. “What fruit had ye then in those things whereof ye are now ashamed?” (Rom. 6:21). Seeing themselves in the broad way that lead-eth to destruction, and being alarmed, they strive to enter in at the strait gate and narrow way, which leadeth unto life, and which is found by few. If we are born again we feel our condemnation, feel the law demands from us what we cannot give it. “There is none good but One, that is God; but if thou wilt enter into life, keep the commandments” (Matt. 19:17-19). This deep-reaching, penetrating word cuts off all hope of self-help. Salvation must come from without, even from the Savior of His people. The power of sin is felt just as the law is felt, the dominion of sin is felt just as the law comes and lays its claim on our consciences. If we can honestly say we would not, we have to say we cannot. If we would flee from a besetting sin, we find it is too powerful for us to overcome. If we would believe in God we find an infidel heart asking with devilish enmity, “Who is the Lord?” saying with an unknown truth, “We know not the Lord.” If we would be humble, pride rises and asserts itself, as if independence belonged to a creature, or that it is in a man that walketh to direct his steps. From this inbred power of sin the Lord alone can save us. And His promise to His people is that sin shall not have dominion over them, because they are not under the law, but under grace.

Then there is the pollution of sin. This, when felt, shuts the soul up in a painful sense of unfitness to pray. For holiness becometh God’s house or presence. For this woeful state the precious blood of Christ is sufficient. “If we confess our sins, He is faithful and just to forgive us our sins, and to cleanse us from all unrighteousness.” And that no regenerated person shall miss the strait gate and narrow way and die under the power of sin, and no sensible filthy soul sink into hell in his confessed pollution, the Holy Ghost is given to glorify Christ as a Savior (John 16:7-15). It is thus the people of God are saved by the Lord and Savior Jesus Christ.

What a mercy it will be if we are brought to know our ruin by sin, our hopeless and helpless state of guilt, and the dominion and pollution of sin. There will go up to God the publican’s cry from our hearts, “God be merciful to me a sinner,” and then will come into our hearts the most blessed experience of that favored man, who went down to his house justified. May God give this salvation to my young friends. Amen.

Rev. J.K. Popham (1847-1937) was a minister in the Strict Baptist Church in England. He was pastor of “Galeed” Chapel, Brighton for 55 years (1882-1937), in addition to being editor of the “Gospel Standard” and “Friendly Companion” for many of these years. This letter was extracted from his Spiritual Counsel to the Young.

JESUS PRESENTED TO THE LORD

“When the fulness of time was come, God sent forth His Son, made of a woman, made under the law.” We have again remembered the birth of the Lord Jesus, and the events that followed. He was laid in...

Ariticle 15 This is a very striking article. It tells us about the reality of our state by nature in which we are all conceived and born. This article is very much a...

How Is Your Life?

What a precious word the Apostle Paul has written to the Romans! To understand these words we have to look at the last verses of chapter 7. There we read his confession about his own way of life. H...