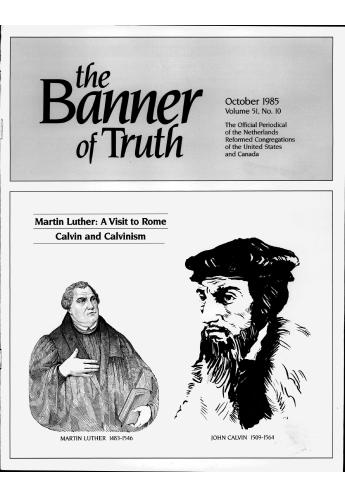 October 31 is Reformation Day: a day of commemoration in which we attend church for a fourfold positive purpose:

Direction: to receive “Reformation” guidance for the issues of the present day.

Supplication: “Lord, revive us in Reformation truth to our very core.”

Questions on religious books may be addressed to 55 Robin Hood Way, Wayne, N) 07470.

The Flavor of Reformed Faith

For us, the Reformation represents the restoration of the doctrines of grace: biblically, doctrinally, practically, experientially. It’s an entire spirit, flavor, and thrust embedded in the Reformed faith which by grace compels the whole man to surrender to God in every sphere of life.

The Reformed faith is too broad to be comprehended in one breath. Its flavor is best caught when it is presented from several perspectives.

Its historical perspective is Protestantism’s answer to Roman Catholicism

— an answer we may aptly sum as “the fivefold solus” (solus is a Latin word meaning, “alone”). First, Scripture alone (sola Scriptura) as the source

of Christian revelation, authority, and rule of faith and practice — not Rome’s Scripture and tradition concept. Second, justification by faith alone (sola fide) as a gift of God — not Rome’s faith and works brand of Semi-Pela-gianism. Third, grace alone (sola gratia)

— not Rome’s system of grace and superogatory merits. Fourth, Christ alone (solus Christus) — not Rome’s Christ and the intercession of Mary and the saints. Fifth, glory to Cod alone (soli Deo gloria) — not Rome’s glory

to God and the papal apostolic succession. This dichotomy — “alone” versus “and” — is the issue involved between Protestantism and Roman Catholicism viewed historically.

Protestantism rapidly evolved into a threefold prong: Lutheranism, Calvinism (synonomous with “Reformed”), and Anabaptism. From a polemical perspective, our Reformed or Calvinistic tradition may be aptly portrayed in the well-known acronym, T-U-L-l-P:

Perseverance of the saints

“Tulip” is the outgrowth of the Canons of Dordt (1618-1619) in which Armin-ianism was roundly condemned, and the doctrines of sovereign grace set forth in bold relief.

From a practical perspective, additional emphases ought to be underscored as essential to the flavor of Reformed thought. Among others, those that are comprehensive of all life include: divine sovereignty and lordship; divine covenant; and a Biblical world-and-life view.

Books on Calvin and Calvinism

These historical, polemical, and practical perspectives of Reformed theology are best fleshed out in the works of the renowned John Calvin (1509-1564), rightly called, the “solid-ifier” and “organizer” of Reformed Protestantism; his successor, Theodore Beza (1519-1605); and the subsequent movement spearheaded at Geneva now known as Calvinism. This movement would have its greatest impact in the Netherlands, the British Isles, and North America.

Reading in the area of “Calvin and Calvinism” is indispensable for a real grasp of our Reformed faith. Happily, many excellent books have been written to aid us in this area in recent years. In fact, Calvinism has flourished in the past decade in North America, South Africa, and parts of Europe beyond all human expectation.

The Reformation represents the restoration of the doctrines of grace: biblically, doctrinally, practically, experientially.

Valuable aid in assisting the reader to reap the most out of Calvin’s Institutes by offering a detailed outline of the main thrust of each section.

Invaluable. Calvin’s Spirit-gifted skill as an exegete of Scripture has been long heralded.

Essential primary source reading for anyone intent upon understanding the Reformed faith. The all-time classic in Protestant theology. This McNeill/Battle edition is far and away the best available in English; includes invaluable indices.

Valuable for those wishing to dip into the practical side of Calvin.

*Cunningham, William. The Reformers and the Theology of the Reformation. London: Banner of Truth Trust, 1967.

Helpful at many junctures, but not always orthodox. Recommended only for discerning readers.

Helm, Paul. Calvin and the Calvinists. Edinburgh: Banner of Truth, 1982.

Helpful answer to those (especially Kendall) attempting to drive a wedge between Calvin and the Calvinists.

Invaluable, easy reading for scholar and layman alike. The book to read if interested in the doctrine of predestination.

Kuyper, Abraham. Calvinism. Reprint ed., Grand Rapids: Wm. B. Eerdmans, 1981. Renowned Stone lectures for 1898. Presents Calvinism as a life-system, which is fleshed out specifically in ramifications for religion, politics, science, art, and the future.

McNeill, John T. The History and Character of Calvinism. New York: Oxford, 1954. More accurate on the spread of Calvinism than on Calvin’s theology. Superseded by the anthology of Reid listed below.

Reliable introduction to basic principles of Calvinism for youth and adults.

The book to purchase on the history of the spread of Calvinism. Countries covered by capable contributors in a very readable, yet scholarly, manner, include Switzerland, France, the Netherlands, Germany, Hungary, England, Scotland, America, Canada, Australia, and South Africa. Highly recommended (chapter 9 excepted).

*Van Halsema, Thea B. This was John Calvin. Reprint ed., Grand Rapids: Baker, 1981. The best book to purchase for grasping the life of Calvin in a very readable and attractive style. Excellent for youth.

Wendel, Francois. Calvin: The Origins and Development of His Religious Thought.

IOPI-Presently out of print, but frequently available through used book stores, such as Baker’s,

English Works on the Doctrine of Scripture (2)

BOOKS AND DISSERTATIONS from HENRY TO PACKER*Henry, Carl F.H., ed. Revelation and the Bible. Grand Rapids: Baker, 1958.Informative essays b...

English Works on the Doctrine of Scripture (1)

Great battle is currently being waged in many Christian circles, denominations, and seminaries relative to the doctrine of Scripture. Particularly Scripture’s inerrancy has been challenged.I...

December is a unique month. On our Gregorian calendar, the end and beginning, old and new, touch each other. Midnight December 31 holds a mystique of its own. Time seems to suspend itself for a mom...

English Works on the Doctrine of Scripture (4)

BOOKS AND DISSERTATIONS fromVANDER STELT TO YOUNGBLOODVander Stelt, John C. Philosophy and Scripture: A Study in Old Princeton and Wes...

English Works on the Doctrine of Scripture (3)