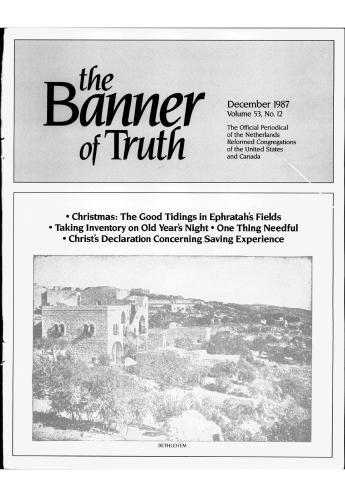 “Neither is There Salvation in any Other…”

“Neither is there salvation irvany other” (Acts 4:12a). There is no other means, there is no other way unto salvation than through faith in the Lord Jesus Christ. Everything outside of this only Name is completely eliminated. No other, thus also no other name.

A preaching which excludes everything but Christ is called a pruning proclamation. It was in this way that Peter spoke to the Sanhedrin. It must have been something for the Jews. They sought their salvation there—outside of Christ. They thought to be saved by keeping the commands of the law. Were they not the seed of Abraham with whom the Lord had established His covenant? And now Peter says to them that there is salvation in none other than in Him whom you have crucified. In other words, cast your own righteousness to the moles and the bats. It is not only worthless, but actually a stench before God.

Is it a wonder that the preaching of Peter was not thankfully received by them? But this preaching applies also today. It is also applicable for us. For where do we seek salvation? For we do seek it, don’t we? Isn’t it for this reason that we come together under the preaching of God’s Word? We perform our religious duties (praying, reading God’s Word, etc.). Many say they do not bother with this any more. But are we not in earnest? In any case this may be expected of us. But…where do we seek salvation? Is it in what we do and do not do? But can this really be the basis of salvation?

Peter said salvation is in none other. Everything of man is here cut off at the root. By the works of the law shall no flesh be justified before God. By nature no one desires this. We must be won over for it, also after grace received. To be entirely set outside with everything that is of us is not pleasant for the flesh. It rises up against it.

Some say, “With a preaching of that sort a person is cast back upon himself.” That is not true. It drives out unto Christ. But for whom is it a wonder that there is still salvation for mankind? Is it not only for one who in himself is worthy of hell? That is a person who not only confesses but also experiences that he has deserved eternal death, and is standing outside of salvation.

Young people, that is a person who goes over the world with a soul weeping and thirsting after God, and who cannot understand that others can seem to be so “happy.” He finds that he is not understood and feels himself alone. He seeks solitude in order to lay the needs of his soul before the Lord. He begs that he may be restored in communion with God.

This person has said farewell to the world and to sin, and the service of God receives the love of his heart. Therefore there is also in his heart a bond with the people of God. At His time and in His way the Lord opens the way for fellowship with His people, for the Holy Spirit bridges the differences. There they find an open ear and heart.

They also learn to know their real name before God: sinner. It means one who misses his purpose. They were created to God’s honor but no longer answer to that purpose. Through sin they have become robbers of God’s honor. With thoughts, words and deeds they have aroused God’s anger and have brought themselves under the sentence of death. They then understand Moses who said, “Thou hast set our iniquities before Thee, our secret sins in the light of Thy countenance.” What a zeal there then is to live holily before God!

When it is lost on our side, the wonderful mystery is revealed that we can be saved by Another.

And what does Peter now say? “It is in this way you shall be saved?” Or does he say, “All this is nothing?” No, not that either. But he does say, “Salvation does not lie in this.” Just read it. “Neither is there salvation in any other.” What a necessity there is for instruction, for salvation is sought there. It is for this reason that the prior discovering is so necessary. “For the Son of man is come to seek and to save that which was lost.” When it is lost on our side, the wonderful mystery is revealed that we can be saved by Another.

May the Lord teach us this for the first time or by renewal.

Rev. R. Boogard is pastor of the Gereformeerde Geemente (Netherlands Reformed Congregation) of Leiden, The Netherlands.

This is again an article of faith, not just of a personal faith, but of all believers.“We believe, since this holy congregation ... ” refers to what we have read in A...

It is the clear teaching of God's Word that faith is a gift of God. It is not an accomplishment of man. Faith does not have a meritorious character as if it were a good work, but it is the empty ha...

The Lord is the unchangeable and faithful God, but people may be very changeable, as you can see in this chapter. In the morning, many people crossed the sea to see the Lord Jesus, but now they tur...

It is a great comfort for God's church that the Lord has chosen them before the foundation of the world, and that everything is prepared for them. This doctrine is no stumbling block to them, but i...

Uitgave: Neither is There Salvation in any Other…”