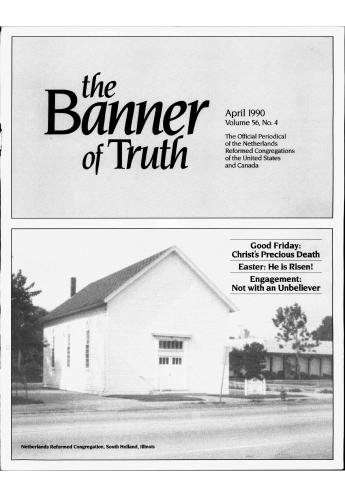 The NRC of South Holland, Illinois (1)

On these pages we commence a series of articles on the history of our congregations under the rubric of” Our Help in Ages Past.” The authors were assigned to this task in 1984 and appreciate the material forwarded to them in subsequent years by various consistories. The Lord willing, the bulk of this material will be incorporated into a high school textbook with the prayer that that Cod who is” our help in ages past” may be” our hope for years to come” (Psalm 90 and Psalter 247). May these articles acquaint both our youth and adults with Cod’s preserving care over our congregations, notwithstanding our total forfeiture of His grace. If possible, we hope to coordinate these articles with a cover photograph, and will outline the history of each congregation according to the historical order of their dates of organization. Thus, we commence this series with a brief overview of our oldest congregation, South Holland, Illinois.

Situated some twenty miles south from the heart of Chicago, South Holland, Illinois is known as one of the oldest Dutch-American communities in the midwest. It was settled in the 1840s by a wave of Dutch immigrants. At that time, it was undeveloped, fertile prairie.

Today, one and one-half centuries later, Chicago’s spreading metropolis has reached out to include South Holland as one of its numerous suburbs. Presently, the population of South Holland is close to 30,000. The price of property is high, traffic is heavy; nevertheless, South Holland remains a pleasant place to live, free for the most part from the congestion and competitiveness of a large inner-city environment. The Dutch flavor of the city is greatly diminished, though not altogether lost. Stores with Dutch goods and restaurants with Dutch menus still fare well. Numerous Reformed denominations with Dutch roots are still represented, including our Netherlands Reformed denomination.

The South Holland, Illinois NRC has the unique distinction of being both the oldest and smallest congregation in our denomination. To understand its beginnings, we must return to the late 1840s. In 1847 the first group of Dutch immigrants—a dozen in number—settled in South Holland. A year later, their number was substantially increased with the arrival of Rev. W. C. Wust, who was accompanied by thirty members of his Old Reformed Congregation. Rev. Wust organized a small Dutch Reformed congregation of fourteen families almost immediately. It was called the Gereformeerde Kerk onder het Kruis (Reformed Church under the Cross). In 1849, Rev. Wust organized a second congregation in a neighboring locality called Roseland, which consisted largely of fresh immigrants from the northern part of the Netherlands. Rev. Wust was a sound and able preacher, whose labors were not without divine blessing. He possessed substantial gifts in exegeting a text and in bringing out its experiential truths. Sadly, however, less than twenty months after organizing these congregations, Rev. Wust felt called in 1850 to return to his former flock in Giessendam, the Netherlands.

Shortly after Rev. Wust returned to the Netherlands, the Roseland and South Holland flocks joined the Reformed Church of America (RCA) as a result of affiliation with Rev. VanRaalte’s churches of western Michigan. From 1850-1855 the pulpits remained vacant in these congregations. In 1855, Rev. M. Ypma (1810-1862), minister in the RCA at Graafschap, Michigan, accepted the South Holland/Roseland call. Rev. Ypma had previously served the congregations of Hallum (in the province of Friesland, the Netherlands) and Vriesland (Michigan). Like Rev. Wust, Rev. Ypma upheld the experiential doctrines of sovereign grace. Nevertheless, history reveals that though his preaching was sound, his character was such that he did not tend to promote peace in the congregations he served.2 In the cases of both Michigan congregations, as well as South Holland, secessions occurred shortly after his departure.

When Rev. Ypma accepted a pastoral call to Alto, Wisconsin in 1861, the South Holland and Roseland congregations were in turmoil. In 1862 a difficult task came to rest on the shoulders of the congregations’ third minister—the Rev. S. Bolks. Rev. Bolks was converted in 1830 at sixteen years of age. He began speaking an edifying word at various conventicles (i.e., gatherings of children of God, called” gezel-schaps” in Dutch) when he was twenty. Subsequently, he felt called to the ministry and studied under Rev. VanRaalte for fifteen months before serving a congregation at Hellendoorn, Overijssel for seven years. In 1847, he and the bulk of his congregation emigrated to western Michigan. He served four congregations (Overijsel and Grand Haven, Michigan; Milwaukee, Wisconsin; Chicago, Illinois) before he accepted the joint pastoral call from South Holland and Roseland, Illinois.

Though pleasant in character, Rev. Bolks reportedly had few gifts for preaching. Morever, a substantial part of the South Holland congregation could not accept his moderate-Calvinistic preaching. As Rev. Bieze notes,” This did not sit well with those favoring a stern Calvinism, such as Rev. Ypma’s, or an experiential-style of preaching joined with a stern Calvinism such as Rev. Wust’s.” For these reasons, combined with a considerable number of unresolved problems left behind by Rev. Ypma, several members broke with the church already in 1862 and began meeting in various homes. Ultimately, this led to contact with several church leaders in Michigan from the True Dutch Reformed Church.3 On January 27,1865 this group was received into the True Dutch Reformed denomination and officially organized. Anthony Van Drunen was elected as elder; Arie Van Drunen and Peter De Jong, as deacons. Fourteen families were received as members of the congregation together with their baptized children, numbering twenty-eight professing members and thirty-five baptized members. The following Sunday nine children who had not been baptized in the recent years of conflict were baptized; hence, the church began for all practical purposes with seventy-two members. Church services were held in the home of Deacon Van Drunen. Such was the birth of what we know today as our South Holland NRC.

The Classical meeting of the True Dutch Reformed church held on January 12 and 13, 1865 at Zeeland, Michigan has, at the request of a few members residing in Long [should read,” Low” ] Prairie, Illinois, appointed and delegated a committee composed of Rev. W. H. Van Leeuwen and Elder T. [should read,” J.” ] De Jong of a congregation at Grand Rapids, Michigan to go there and, if possible, to organize a congregation. The aforesaid committee put forth efforts to that end on Friday, January 27, 1865 at the home of a member, Arie Van Drunen, after having heard a sermon preached by Rev. Van Leeuwen based on Psalm 89:16a.4

Two weeks later, on February 13, the small congregation decided to erect their own church building. Prior to the materialization of these plans, however, their small group became considerably smaller. Only a few months after their organization, Rev. H. Koopman accepted a called to the RCA church in South Holland. Rev. Koopman was an able pastor, experiential preacher, and tender peacemaker. Most of the members of the newly organized True Dutch Reformed congregation returned to their old RCA church. Classical minutes for 1867 inform us that church services were no longer being held in the True Dutch Reformed congregation.

With the departure of Rev. Koopman in 1867 to Pella, Iowa and the arrival of Rev. A. Zwemer in 1868 as pastor of the South Holland RCA, the South Holland True Dutch Reformed Church began to meet again. Immigration and internal growth added to their numbers quite rapidly so that by 1869 they were of sufficient size to be able to support a minister. The first trio presented consisted of Rev. E. L. Meinders (of Steamboat Rock, Iowa), Rev. J. Schepers (of Chicago), and Rev. H. R. Koopman (of Pella, Iowa). Rev. Koopman received the call but declined.

Great strife prevailed in these early years (1868-1871). Consistory minutes record numerous examples of discipline. Near the end of 1871, the moderator, Rev. F. Hulst, finally persuaded the current consistory of two elders and two deacons to lay down their respective offices in order to allow the congregation to elect a new consistory. Remarkably, in a free vote the congregation elected the same four men back into their identical offices! Nevertheless, this proved to grant some return to stability.

In 1872, the congregation called Rev. F. Hulst, Rev. H. Koopman, and Rev. H. Fryling, all of whom declined. In 1873, Rev. Fryling declined a second call. The pastorless flock again encountered discipline cases and strife. Under God’s blessing, the able assistance of Rev. Hulst preserved the flock from further divisions.

On December 18, 1873, a pastoral call was extended to Rev. E. L. Meinders, who received freedom to accept, and would remain with the South Holland flock for the remainder of his life. Blessed times were to come, as we shall see next month, the Lord willing.

1 For the bulk of the historical material recorded in this article, we are indebted to the painstaking research of Rev. Cerrit Bieze of Athens, Ontario, who has been working for several years on compiling a volume detailing the history of our South Holland NRC. The title for his forthcoming work, A Remnant Remains, is taken from Mrs. Meinders’ conviction that the Lord had promised to preserve a remnant in this congregation—a promise which has been sorely tried at times, but has been fulfilled until this present day.