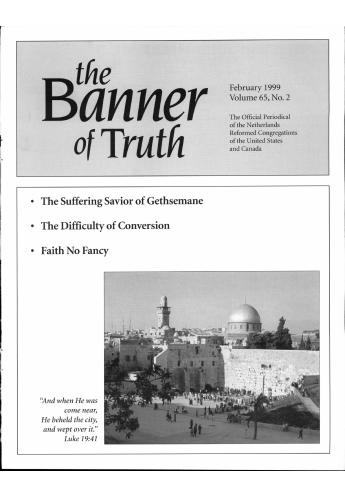 “I know…where thou dwellest, even where Satan's seat is” (Revelation 2:13a).

“Where do you live?” If you are asked this question, you no doubt know how to answer. You will most likely describe the place in which you live by mentioning various details which distinguish it from other places. However, you must not forget also to make a spiritual assessment of your dwelling place.

Many particulars are known about the city of Pergamos, to which a letter was sent in Revelation 2. The old city was built on a mountain, and it was full of palaces, temples, and public buildings. The lower city lay on a plain and had paved streets, plumbing, a sewer system, and much more, which served to make living there most pleasant.

Of all the temples, those for Zeus and Aesculapius were certainly the most prominent. The foundation of the altar for Zeus measured 38 meters by 35 meters. And Aesculapius was honored as the god of the art of healing. The serpent was the creature which was dedicated to him. Furthermore, parchment originated in this city. Because of this, it derives its name from this city. And the fact that people needed writing material was proven by the existence of a library which held 200,000 books! Because of its many academies, learning flourished in this city.

In His letter to the congregation of Pergamos, the Lord Jesus mentioned nothing of all this in His assessment of the city. A spiritual judgment suffices, and He said, “I know…where thou dwellest, even where Satan's seat is.”

By this description, “Satan's seat,” did the Lord mean the altar of Zeus, or the temple of the serpent-god Aesculapius? I do not think that we must think of something concrete. The devil wants to rule over all expressions of culture. He, who is called the “prince of this world,” desires very much to establish his seat wherever science and art flourish. And the prince of this world blinds the senses, so that many are transfixed by the grandeur of this life without ever coming to the spiritual assessment which Christ gave here.

Do we, indeed, see where Satan establishes his seat and where he reigns? Science and art have also flourished in our western world. We do not have to cast away the knowledge and skill which God has given man. We are called to cultivate and subject the earth. Still, we must see with sorrow how the devil seizes all manner of things produced by culture. We must fight against his power, but then we must recognize it. Then we have to be able to see his seat in the world of art and science, entertainment and recreation.

And does he not set up his seat even closer by? Is he not diligently assisted by many people in this? One can find an altar dedicated to the service of the idols of this time in many living rooms — an altar which can also be considered as a seat of Satan. He reigns by means of sin, to which he wants to tempt us.

Yes, does Satan not establish his seat even closer by? Who reigns in your heart? The Lord Jesus spoke of a “strong man armed” that “keepeth his palace.” He maintains a false peace. This “peace” is found with worldly people, who do not recognize the devil in his work, and so serve him. It is also found with all kinds of religious people, who let the devil reign over their hearts by means of outward things. The Lord Jesus says of them, as He did of the Pharisees, “Ye are of your father the devil, and the lusts of your father ye will do.”

As long as we do the will of the devil, he reigns over us. Someone may say, “We must not learn to know the devil, but Christ!” The latter is certainly true; we must learn to know Christ. However, we must consider that He spoke the words on which we are now meditating. And He spoke them to the encouragement of those who know the conflict against the devil in their own hearts, in their families, and in their work situations.

The Lord Jesus says to them, “I know where thou dwellest; I do, indeed, see your battle against that mighty enemy. But know that I am stronger. I have already conquered him. Therefore do not fear this enemy. He can do no more than kill the body; he cannot kill the soul. He did slay Antipas. But then this warrior came home to Me. Therefore, seek My help; seek the strength of My grace in your hearts, to overcome sin in the family, to continue serving in humility, and for everything.”

Do you see the seat of Satan already? Or do you not fight against his power? Whoever knows him as an enemy and hates the sin by which he wants to reign, may know that Christ does, indeed, know his circumstances. He desires to help in the conflict, yes, to give the victory. But a little while, and the church militant may change its place of abode, then to live eternally with the Lord!

The words of Hebrews 11:8-10 describe Abraham's journey here below. They say that by faith Abraham was obedient unto the Lord by leaving everything and trusting that the Lord had called him. Abraha...

Modern Media — Are They Safe?

Last time we wrote an article stating the Synodical decisions concerning modern media, especially regarding television and the Internet. In short, television is to be completely rejected, and the u...

2 Kings 6:8-17The king of Syria came to fight against Joram, king of Israel. In planning for the battle, the king of Syria instructed his army where they were to encamp, hoping to take his e...

Abraham's Rejoicing Because of Christ's Coming

Christ had an argument with the Jews. They rejoiced that they were of the seed of Abraham, and because of this they boasted that Abraham's God was their Cod. And to this mistaken conclusion the Lor...