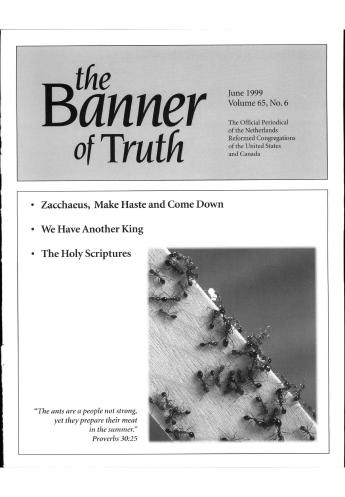 The Urim and the Thummim

“And thou shalt put in the breastplate of judgment the Urim and the Thummim” (Exodus 28:30a).

What were the Urim and the Thummim? It is not easy to write about the Urim and the Thummim, words which everyone knows are in the Bible, but the precise meaning of which is quite difficult to determine. If we turn to the Christian Encyclopedia of Professor Dr. J. Schoneveld, his words are certainly not encouraging: “Because of lack of details one has to give up on alleging anything regarding the nature of these objects and the handling of them.” Also our old marginal commentators were very reserved and averse to all distorted images of them, saying, “What they were is uncertain; one does not read anywhere that God commanded Moses to make them, much less how or of what these were made.” Yet they do write something more of them, although it is not a great deal, by which they do, in our opinion, touch on the heart of the matter. We will speak of that later.

Let us first view where and how God's Word speaks about the Urim and the Thummim. The number of places is limited; there are only seven times that the expression appears in Scripture. We will search them out.

In Leviticus 8:8 we are told how Moses put the Urim and the Thummim in the breastplate of Aaron. Later we read in Numbers 27:21 of the appointment of Joshua as the successor to Moses. In difficult circumstances Joshua was to stand before Eleazar the high priest, who would ask counsel for him “after the judgment of Urim.” Here only the first word of this mysterious expression is used.

In Deuteronomy 33:8 we read how Moses blessed the tribe of Levi with these words: “Let Thy Thummim and Thy Urim be with Thy holy one, whom Thou didst prove at Massah, and with whom Thou didst strive at the waters of Meribah.” What is especially noticeable here is that it speaks about God's Urim and Thummim. Further we read in 1 Samuel 28:6 that king Saul enquired of the Lord, but that He ansered him not, “neither by dreams, nor by Urim, nor by prophets.” What attracts our attention here is that only the Urim and not the Thummim is mentioned, and that evidently the Urim can also remain silent!

Finally, there is also Ezra 2:63 and Nehemiah 7:65. These texts are quite similar. They speak about the priests who had returned from the Babylonian captivity, but who had lost the registry of their genealogy, so they could not prove that they belonged to Israel's priestly line. Who was then to make the determination? Well, they decided to wait “till there stood up a priest with Urim and Thummim.” There was in those days after the captivity a high priest, namely, the well-known Joshua, as related in the night visions of Zechariah, but evidently he no longer had the Urim and the Thummim at his disposal. Were these objects lost at the destruction of the temple? In any case, it is certain that after this we do not read in Scripture about the Urim and Thummim.

We have taken notice of the seven scriptural references regarding these objects. It is to be observed that also in those texts which speak of a request for the ephod, thereby to ask counsel of God, the Urim and Thummim were meant, as they were closely connected with the ephod, a part of the high priest's vestment. Thus we read in 1 Samuel 23:9 that David, when in difficult circumstances, requested Abiathar the priest, “Bring hither the ephod.” David then received a very clear answer to his questions. Something similar is found in 1 Samuel 30:7.

Rounding off our search, we may say that in God's Word the Urim and Thummim are spoken of when the will of God was to be made known. They pertained to matters which could not be resolved in any other way. This is quite clear. However, it is much more difficult to answer the question: How did the Lord answer by the Urim and Thummim? This question is so difficult because we still do not know exactly, as we said above, what the Urim and Thummim were.

I will present to our readers several conjectures which people have brought forward throughout the years. Some have thought, as we have seen, that they were the stones upon the breastplate. We feel this is not correct. Others considered them to be cubes which were to be thrown by the high priest, so that the use of the Urim and Thummim would be a type of casting of lots. Others have thought of a moving image, which by nodding or shaking would give an affirmative or negative answer. There has also been the opinion of a piece of parchment hidden in the breastplate. And thus we could continue. Calvin is straightforward in his judgment: “I pass over other fancies, which are equally frivolous; nor am I anxious to know what was the form of either of them.”

Very likely the solution of this mystery lies in the names Urim and Thummim. Luther translated these words as “light and justice.” That the first word has the meaning of light or splendor is acceptable. But whether Thummim means “justice” or “truth” is still a question. Calvin translates it as “perfections.” They are certainly words which are plural. Calvin draws the matter directly to Christ and observes that, in his opinion, Urim, or splendor, means the light of the light of the knowledge, with which the true High Priest enlightens all believers. He only is the light of the world!

By Thummim (perfections) Calvin understands the symbol of the perfect and entire purity which is to be sought only in Christ. According to the reformer, the asking at the Urim and Thummim for counsel took place because of the childlike situation in which God's people were then living. As to what is precisely to be understood by the Urim and Thummim and how they were used in practice, Calvin gives no answer.

Personally there is much to be said for the view of Rev. I. Kievit in his writing, The Book Joshua. His opinion is that Urim and Thummim were actually objects secured in the breastplate of the high priest. What they looked like remains hidden for us. However, that they were a type of stone used for casting lots is not to be accepted. Israel knew of the holy use of casting of lots, and therefore they did not have need of the Urim and Thummim for this.

We must therefore view the Urim and Thummim as objects which were serving as signs and pledges; the Lord in times of difficult decisions would not permit His people to lack light and truth. We recall again, as promised, the words of the marginal writers on Exodus 28:30, where it is said, “These words one could translate as ‘lights’ and ‘perfections.’ It pleased God by these to give clear and perfect answers to the high priest, but what they have been is uncertain.”

Therefore we can entirely concur with the old commentator Gerlach, who commented that “the high priest possessed the divine pledge which gave him the assurance that in all weighty matters in which the justice and the welfare of entire Israel was involved, upon his prayer in faith, the Lord would never leave in uncertainty what He desired for His people.”

Urim and Thummim; lights and perfections. They were the portion of the Old Testament high priest. Actually this high priest then had something in him of the three offices, although he fully occupied but one office. For example, when Joshua desired light regarding the way which God would have him to go, he had to stand before Eleazar, the high priest. There he received the Urim, light upon his path. If Joshua or the people were in transgression, they had to go to the high priest, whose administration spoke to them of the blood of atonement, and whose breastplate spoke of the priestly intercession. If justice had to be done and they knew not how, then they had to go to the high priest, who by means of the Thummim had the kingly ability for decisions in matters of judgment.

It is correctly pointed out that after David these three facets have been separated: the prophetical office developed in Israel, the high priestly office remained, and in David's house the kingly office came into an independent existence. It is therefore no wonder that almost nothing is to be read in Scripture of the Urim and Thummim. They were no longer necessary!

For us, this instruction is to be drawn from it: for blind children of men who no longer know the way, for a sinner worthy of death who is unable to pay, for a slave of sin who has always served a wrong king, everything that a poverty-stricken sinner needs is to be found in the Person of Christ, the great Prophet, Priest, and King. He is the prophetic Light of Urim, the priestly Atonement and Intercession, and the kingly Thummim.

A PRAYER FOR GOD’S LEADING

Psalm 42 and 43 are related to each other. Many believe that these well known Psalms were originally one Psalm. The dividing in chapters is the work of man and does not belong to the inspiration of...

WHAT IS WRONG WITH LOTTERY

Part I To know how a Christian should live, has never been easy. Each new situation in our life requires a new and justified answer or decision. Especially in our da...

(Continued from last issue)BILESSED be God, our gracious Redeemer is to this day the Teacher and the Prophet of his people. He points out to them the way of salvation through his holy word,...

A Prayer for God’s Leading

Uitgave: The Urim and the Thummim