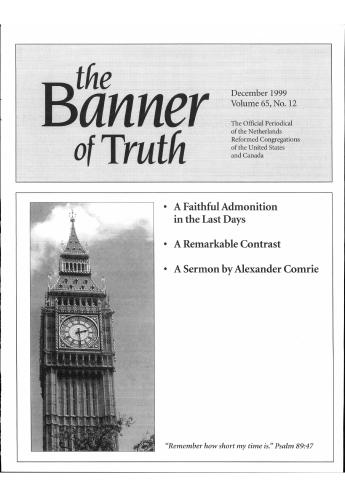 A Faithful Admonition in the Last Days

“Wherefore, beloved, seeing that ye look for such things, be diligent that ye may be found of Him in peace, without spot, and blameless. And account that the longsuffering of our Lord is salvation” (2 Peter 3:14-15a).

Approaching the end of his life, the apostle Peter wrote a second letter to the strangers who were scattered abroad. They were people who no longer felt at home here below. They were beset by trials and afflictions, they were harassed by many enemies. Those strangers knew that, in spite of what the scoffers claimed, the Lord is returning to judgment, and that He shall come as a thief in the night. The world is reserved for that judgment by fire, and the fashion of this world passeth away. But then the new heavens and the new earth shall come, wherein dwelleth righteousness.

Peter is bringing his epistle to a close. He begins to sum up, and he says, “Wherefore, beloved, seeing that ye look for such things.”

Do you, reader, look for such things? Do you look out the window to the heavens, as I heard once of an old, God-fearing elder, who stood there longing for the coming of his Lord? Rapidly we are coming to the end of 1999, and it seems, as seldom before, the world and religion are making much ado about this particular changing of the years. Many are anxious and despairing, but, alas, they are more concerned about how they will obtain food and drink in the year 2000 than about their soul; they might not even live to see the new year. Does not God care for the sparrows? Others predict the end of the world, while that day and hour no man knows, but God in heaven. Still others are boldly optimistic that man's progress will build him a better world with greater material prosperity, as if we will live on earth forever, and as if there is no God who reigns. Are you looking for these things, or are you looking for such things as Peter speaks about? Are you looking for the full and glorious coming of God's kingdom?

Are you looking for the full and glorious coming of God' Kingdom?

Peter writes to a people who long for a new heaven and a new earth. But then we must be renewed ourselves; then we must be prepared to meet our Judge in righteousness and in peace; then we must be reconciled to Him. Yes, then we must have become a stranger and pilgrim here below; one who is no longer at home on earth; one who has become so weary of sin, of the world, and of the relentless enemies, weary of Satan, but weary especially of self. The Lord brings His inheritance to that place in the course of a dying life; they must die to their carnal desires, they must lose their own expectations, their own strength, and their own wisdom. The Lord lays them low, but He also raises up a lively hope in their heart. They begin to yearn for the day of the coming of the Lord, that their redemption would draw nigh.

From this hope the apostle admonishes those strangers. “Be diligent,” he writes, be earnest about this, hasten, for the matter can stand no delay. “Be diligent that ye may be found of Him in peace.”

Strangers here below, do you have peace with God? When Christ returns, shall your end be peace? It is one of the two: warfare or peace, enmity or reconciliation. Peter desires to stir up a holy unrest in the soul of those strangers, for we have declared war with God in Paradise, and we carry arms rebelliously against God. Those strangers have been discovered to this in some measure by the operation of God's Spirit; they have grieved about it, and there are times that they look for the end of their life. However, Peter wants to press home to those strangers: Do you have peace with God? Do you know that your account has been settled? Has your debt been paid? Make your calling and election sure. Be diligent to be found of Him in peace.

Strangers here below, does it never burden you, even now at the close of another year? Is it enough to have seen something of peace, to have tasted a little of that peace? Not that you must slight what the Lord has given, but has it come to a solution in your life? Do you say, How is it possible to be found of Him in peace? Then I, as an enemy, must be reconciled to God. Then I must be found in Christ, not having mine own righteousness which is of the law, but that which is through the faith of Christ, the righteousness which is of God by faith. Then I need the application of that precious blood, for the Mediator made peace by the blood of His cross. What I need at the end of the year is to be led into the Savior's suffering and death. What I need is experimentally to know that He was delivered for my offenses and was raised again for my justification. Then my soul has peace with God through the Lord Jesus Christ.

There lies the firmness for the Church. That is the comfort in life and death. Then you can leave the old year and enter upon the new. Then you are accepted in the Beloved, for the Father has accepted Him and His sacrifice. Then He is my Peace.

Peter desires the strangers to grow in the grace and knowledge of the Lord and Savior Jesus Christ. That desire also comes out in his admonition that they must be diligent to be found without spot, and blameless. Through His Son, God does not behold iniquity in Jacob, neither does He see perverseness in Israel. But as those strangers travel towards the end, they must heed the admonition to be holy, for God is holy. They must be diligent to be spotless and blameless.

Strangers, Peter admonishes, flee from sin and the pollution of the world. Hate the garments spotted by the flesh. Be not conformed to the world. Be spotless, that is, be pure. Be blameless, that is, let none be able to point out the slightest blemish in you. And be diligent in this.

Then those sighing strangers begin to cry. There is in their heart by grace an upright desire, wrought by the Holy Spirit, to be spotless and blameless, because the Lord is so good and worthy to be served, while sin is so abominable. Yet that corrupt fountain of their heart remains so foul; the closer they come to the end, the viler they see themselves to be. The good that they would, they do not, and the evil that they would not, that they do. Instead of being spotless they are full of guilty stains, yes, black from sin. Instead of being blameless they are altogether sinful and unclean. Be diligent? The harder they work, the worse it becomes. That is what strangers learn in the way of sanctification.

He delays His coming that His bride may be fully prepared and adorned by His Spirit.

But if there is now a soul with his head bowed down in shame, not daring to look up for the coming of the Lord, there is a word of encouragement with this admonition. If for your guilt you must be found in Christ and thus be acquitted before God, so for your defilement and pollution you must be found in Him, that His spotless holiness may become also your holiness. What you cannot do, He undertakes for you. He sanctifies and cleanses His bride with the washing of water by the Word, that He might present that church unto Himself a glorious Church, not having spot, or wrinkle, or any such thing, but that His Church should be holy and without blemish. That is a small beginning of holiness here, but He shall one time perfect it.

The end is near, O strangers here below — the end of the year, the end of your life, the end of the world. However, on account of His longsuffering, the Lord still tarries. Do not be disheartened, writes Peter, but account that the longsuffering of our Lord is salvation. He still gives time to the living Church to repent and be diligent. He delays His coming that His bride may be fully prepared and adorned by His Spirit. He postpones, as it were, His return to judgment, for the last ones of His chosen race must still be brought in; therefore He still bears with the unregenerate but chosen sinners. This longsuffering tends to their salvation.

Strangers here below, the end of all things proclaims to you that your Lord is surely coming, but even as you must wait patiently for that great day, the Lord fulfills His counsel. His longsuffering is yet another token for you that your salvation is sure to follow. Seek then to be diligent that ye may be found of Him in peace, without spot, and blameless. May the apostle's admonition stir you up to that end, even in the remaining days of this year. Yes, as long as it pleases the Lord to be longsuffering, may it be our diligence throughout the year to come.

But, my unconverted reader, the judgment shall surely come, and you are not at peace with God. You are not spotless and not blameless, for you are not found in Christ. You will be found of Him a corrupt enemy. Must you travel to the end of this year unrenewed and impenitent? The longsuffering of the Lord is salvation to His people, but for you it shall mean sorer punishment as you fill up the measure of iniquity. It shall not be longsuffering unto your salvation unless the Lord intervenes. Do you not see the blessedness of God's children, their comfort in life and death, their peace, their joy, their holiness? That God's forbearance might lead you to repentance! Seek ye the Lord while He may be found, call ye upon Him while He is near“ (Isaiah 55:6).

The end is not yet.

But it is near.

A second reason why so few question their faith is men's settling themselves on unsound evidences and principles of peace that will not bear them through before God. I do not say that they have not...

After the Lord Jesus had fed the multitude of five thousand, the people desired to take Him by force and to make Him a king. Perhaps even His own disciples were carried away with this idea. The Lor...

—Luke 2:50Rev. C Vogelaar is pastor of the Netherlands Reformed Congregation of St. Catharines, Ontario.Ignorance in the way of salvati...

Two of the friends of Jesus went to their home in Emmaus. They had left Jerusalem, the city of blood, where their hope had all but perished when the dead body of Jesus was laid in the grave in Jose...

The Joy of the Church

This psalm is a thanksgiving song for those who have been delivered. We will never be able to explain this psalm in a right way unless our eye is vested upon the great Surety...

Uitgave: A Faithful Admonition in the Last Days